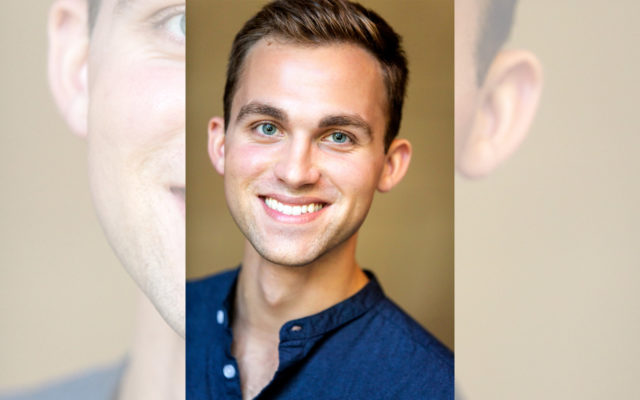 “… I am super committed to learning from my year in Jerusalem and hopefully gaining a greater understanding of how music can be used to bring together communities at conflict.” — Jared Michaud

Jared Michaud, 22, earned a bachelor’s of arts degree in theater studies as well as a certificate from the education studies scholars program from Yale on Monday, May 20.

A standout in musical theater while at Fort Kent Community High School, Michaud expanded on his talents to become a member of the Yale Alley Cats, a world traveling male a cappella group. He also served as president of the Yale Glee Club. Past presidents of the club include the famed composer Cole Porter, and Jonathan Bush, father of the late United States President George H.W. Bush.

During his time attending Yale, Michaud spent time working with youth in the arts

through the Music in Schools Initiative, the Long Wharf Theatre’s Education Department, and the Morse Summer Music Academy.

“My research in education studies has primarily dealt with how to use the arts to bridge chasms of difference and to bring together divisive communities. Most recently I have completed my senior capstone project titled “Theatre of the Oppressed in Rural Education: An Applied Theatre Activity Teaching Social Empathy in Isolated, Homogenous Schools” — it’s a project that aims to bridge America’s sociopolitical rural-urban divide by focusing on teaching social empathy to rural students through theater,” Michaud said.

”I have had very little exposure to the Israel-Palestine conflict — it’s not something that’s taught in Catholic northern Maine — but I am super committed to learning from my year in Jerusalem and hopefully gaining a greater understanding of how music can be used to bring together communities at conflict,” he added.

Michaud deferred acceptances to graduate music programs from Cambridge University and Oxford University to embark on the upcoming fellowship.

Michaud also trained with the College Light Opera Company and at IES Vienna during his college years at Yale.

While still in high school, Michaud was one of only 150 students selected out of more than 100,000 applicants for a $20,000 Coca-Cola scholarship to help fund his college education.

Just one year after graduating from Fort Kent Community High School, Michaud attended the NOVUS Summit at the United Nations headquarters in New York as a United Nations youth delegate.

He also worked with YUDA Bands which aims to eradicate poverty through offering educational scholarships and resources to students in developing countries, and founded the Rural Students Alliance at Yale.

“The transition from rural communities like Fort Kent to Yale is not easy, and there are other students who go through this at Yale, so I thought I would create a community to offer support to these students, in addition to celebrating rural cultures around our country. In the long run, growing up in Fort Kent and then going to Yale has given me a larger perspective on the world and has helped me identify my passions. I don’t think I would be going to Jerusalem without all of this,” Michaud said.

This summer  Michaud will travel on a full scholarship to Greece with the Yale Alumni Chorus. He will also serve as a Vocal Apprentice with Berkshire Choral International and travel to Prague to perform before moving to Jerusalem.

“I am incredibly grateful to those in Fort Kent who fostered in me a passion for the arts, primarily (Fort Kent Community High School educator) Doug Clapp and (local music teacher) Joanne Zafonte. Without them, I would never be this involved in music and performance at Yale. I would never consider pursuing this as a career, and I would not have seen the value of using the arts for social change,” Michaud said.

“For me, the arts exposed me to so much while living in isolated and homogenous Fort Kent. Without the arts, I would have never been taught to dream big, to look beyond our small corner of the world, and to think about how the arts can change and shape people and politics. It really does take a village to raise a child, and I will surely remember Fort Kent for all it taught me as I spend my year in teaching, learning, and using the arts for social change in Jerusalem.”

The upper-level low pressure area that has been parked over southern New England will continue to stall there today into the overnight period then begin to open up and shift southeast into the Atlantic Thursday.
Campaign Corner END_OF_DOCUMENT_TOKEN_TO_BE_REPLACED

Dale Crafts filed his nomination papers for Feb. 21 with the Secretary of State to officially be placed on the primary ballot on June 9, 2020, for the U.S. House of Representatives 2nd District race.
Our Sponsors END_OF_DOCUMENT_TOKEN_TO_BE_REPLACED