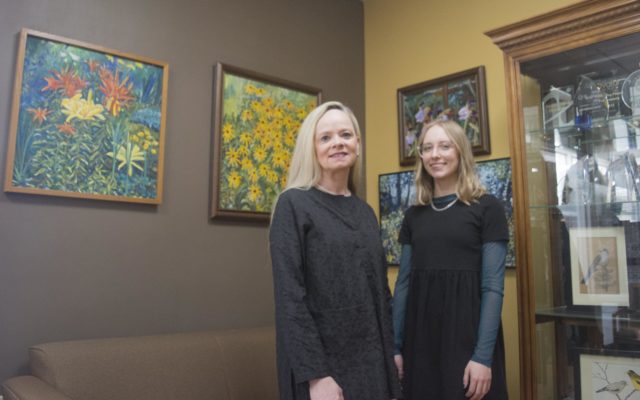 Chris Bouchard • May 22, 2019
Cary Medical Center recently started displaying an art exhibit featuring the work of Tim Finnemore, an artist who, in the early 1980s, became a graphic designer for the new Cary Medical Center facility after it moved from Lyndon Street to Van Buren Road.

CARIBOU, Maine — Cary Medical Center recently started displaying an art exhibit featuring the work of Tim Finnemore, an artist who, in the early 1980s, became a graphic designer for the new Cary Medical Center facility after it moved from Lyndon Street to Van Buren Road. 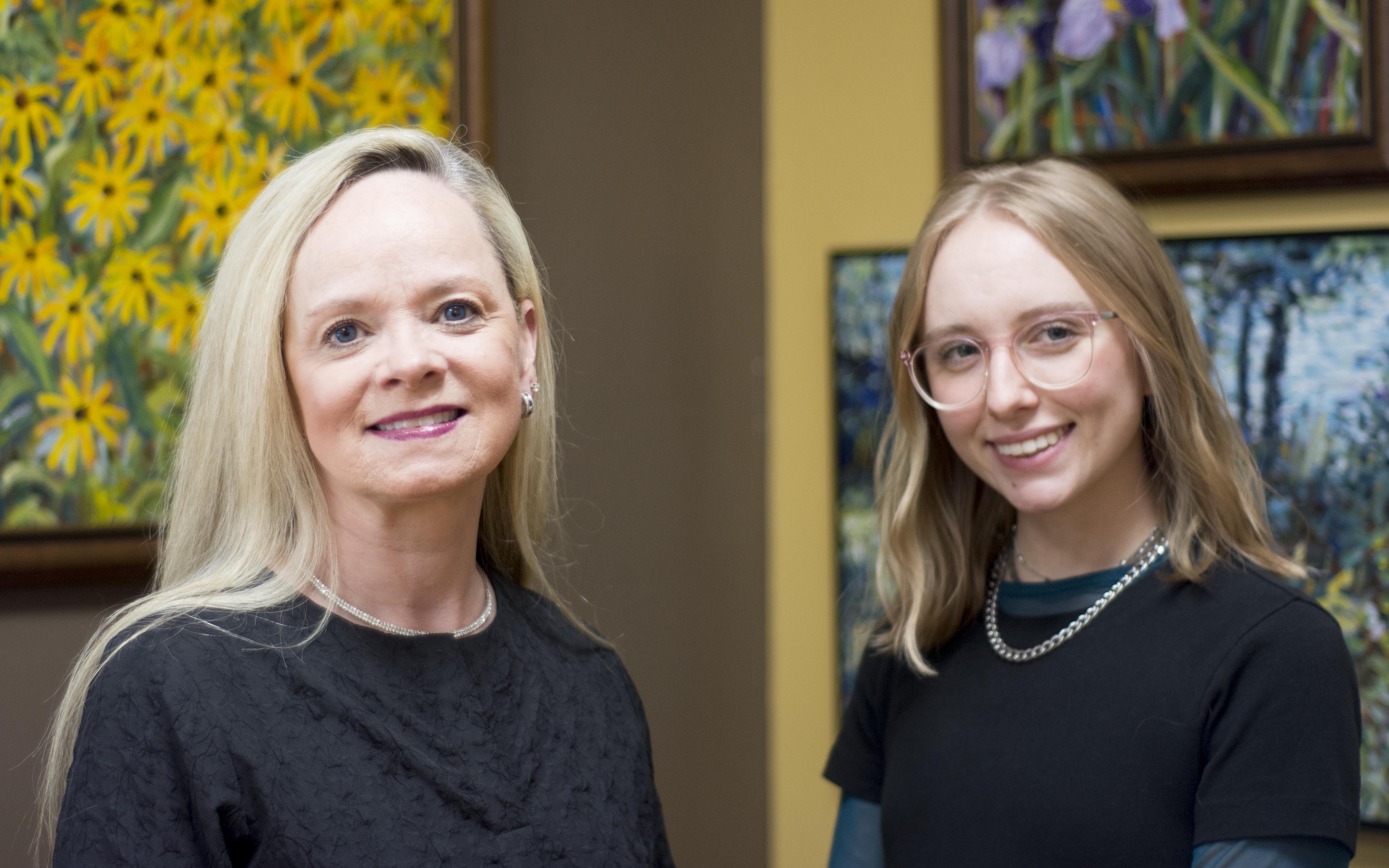 Cary Medical Center recently began displaying artwork from Tim Finnemore, who worked for the hospital as a graphic designer and created the facility’s iconic “CARY” logo with a chickadee perched atop the bold letters. Here, Cary Medical Center CEO Kris Doody, left, and Finnemore’s daughter Kate stand in front of his paintings displayed in the hospital. (Chris Bouchard | Aroostook Republican)

Upon becoming the new graphic designer, one of his first priorities was to create a new logo for the municipally managed hospital.

He presented the initial logo redesign in 1982, which emphasized the name “CARY” in a bold and recognizable image inspired by hospital founder Dr. Jefferson Cary.

Finnemore continued to create art for the hospital and as part of his duties he created a drawing of a chickadee as part of the hospital’s regular newsletter.

“The bird was actually on another publication at first,” said Cary CEO Kris Doody, “and Jack McCormack, our previous CEO, saw it and wanted to put it on the logo. So Tim combined the two and now it sits atop the word Cary.”

As he worked the bird into the logo, perched atop the massive, bold letters, he considered the chickadee’s struggle against a brutal Aroostook winter as a fitting metaphor for the unique challenges the hospital faced throughout its years.

“It’s a very resilient bird,” said Doody. “It survives in the harshest conditions all year long. This winter, I’d been watching chickadees more and more and they truly are an amazing, resilient bird. Just like us.”

Unfortunately, Finnemore passed away in 2001, however his artwork remains an important part of the hospital’s identity. This year, in celebration of the hospital’s 95th anniversary, Finnemore’s family lent roughly 15 of his paintings to the facility to display in honor of his life and work.

Kathy Finnemore, his wife, said that Finnemore had been painting all of his life, since as early as 5 years old, and that his work spans a myriad of mediums from acrylics and watercolor to sketches and carvings.

Kathy said the hospital contacted her for the 95th anniversary and that many of the paintings she and her daughter Kate chose were because they were painted in the month of May, which not only is the month of Hospital Week but also that of Tim’s birthday.

Cary Community Relations Director Bill Flagg, who worked with Finnemore when he was first hired by Cary, said, “Tim was very familiar with corporate logos and studied a lot of branding,” at the time of the hospital logo’s design.

“He would show me the yellow pages of the phone book and point out logos for IBM and Sears,” Flagg recalled. “He explained that those companies create a very bold logo with their name, which is critical. He wanted to use very heavy, blocked lettering for the Cary logo, and now if you put our name against a lot of other logos, it really stands out.”

As the Maine Turnpike expects 1 million travelers alone over the Labor Day weekend, policymakers are gearing up for a sprint to solve one of the state’s most intractable problems: a long-standing — and growing — transportation funding gap.
Apex Weather END_OF_DOCUMENT_TOKEN_TO_BE_REPLACED

A strong Arctic cold front will push into the region from the northwest tomorrow with a chance for some light snow across the region.
Our Sponsors END_OF_DOCUMENT_TOKEN_TO_BE_REPLACED