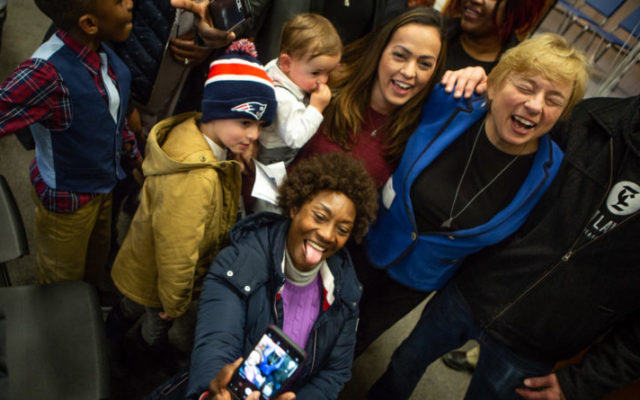 Michael Shepherd, BDN Staff • May 17, 2019
Gov. Janet Mills will hold a traditional Muslim meal at the Blaine House for the first time in Maine history, according to an organizer.

Gov. Janet Mills will hold a traditional Muslim meal at the Blaine House for the first time in Maine history, according to an organizer.

Mills spokesman Scott Ogden confirmed this week that the governor would be hosting an iftar, the meal that breaks the daily fast during the holy month of Ramadan for Muslims, for community leaders on Sunday. It follows a Seder at the governor’s mansion for the Jewish holiday of Passover and an Easter egg hunt.

While many of Maine’s Muslims have come here recently, the state has a longer history of Muslim immigration. Maine is the whitest state in the nation, but it is home to a Muslim population of thousands largely centered around Portland and Lewiston. They have primarily come here as refugees or as secondary migrants from other parts of the United States since around the turn of the 21st century.

The first group of immigrants came mostly from Albania to work in a Biddeford mill around 1900, according to a 2015 article in the Maine Policy Review by Reza Jalali, a University of Southern Maine administrator. They may have established America’s first mosque, but most were killed in the 1918 Spanish flu epidemic.

A Muslim leader said the dinner came together at the urging of community members. Jalali said the first-of-its kind dinner was suggested by Muslim leaders including Portland City Councilor Pious Ali and Fatuma Hussein, who runs the Immigrant Resource Center of Maine in Lewiston. Jalali cited the Mills administration’s desire to “make Maine’s immigrants feel visible and welcome” and said there are other plans to “help immigrants gain a sense of belonging.”

A public hearing on Mills’ planned climate change council will dominate a slow Friday in Augusta. Only three committees are in on Friday, but the planned hearings include one on a bill that would enshrine the governor’s planned Maine Climate Change Council, a group of more than three dozen people that would be tasked with filling in a vague plan to have 80 percent of Maine’s electricity come from renewable sources by 2030 and 100 percent by 2050. Mills has called it “ambitious” but “achievable.”

The bill is sponsored by Sen. David Woodsome, R-North Waterboro, and backed by the top-ranking Democrats in the Legislature. It would rely on $250,000 in annual funding proposed in Mills’ recent change package to her two-year budget proposal. Former Gov. Paul LePage’s political group criticized it on Thursday, calling it a gift to “environmental special interests.”

Other panels will meet to discuss an array of gun bills and a proposal from House Speaker Sara Gideon, D-Freeport, to pass automatic voter registration. See the full schedule here.

— Maine’s senior senator was the only Republican to oppose a nominee to the federal bench. Citing concerns about anti-abortion statements the nominee has made, U.S. Sen. Susan Collins joined all Senate Democrats and independents in voting against the nomination of Wendy Vitter to a U.S. District Court seat in New Orleans. But Vitter won support from all other Senate Republicans and was confirmed Thursday by a 52-45 vote. It was only the second time that Collins has broken with President Donald Trump on a judicial nominee.

— A government review of ‘stealth’ destroyers built in Maine found hundreds of problems. The U.S. Government Accountability Office found more than 320 “serious deficiencies” when Bath Iron Works delivered the first-in class USS Zumwalt’s hull, mechanical and electrical systems to the Navy in May 2016. The report flags more than 240 “serious deficiencies in the second “stealth” destroyer after sea trials in 2018. The report places the bulk of the blame on the Navy for changing the mission of the destroyer line after the design and construction processes had begun and for its inability to settle on weaponry and other systems.

— Maine’s junior senator is wary of overreaction to intelligence reports about heightened Iranian military activity. U.S. Sen. Angus King, an independent who caucuses with Democrats and who serves on the Intelligence Committee, said he is fearful that a “miscalculation” could draw the U.S. into a conflict. “I don’t think there’s faulty intel here necessarily. I think the intel may be accurate,” King told CNN on Thursday. “But the unanswered question again is, are they reacting to our assertions of action in the Middle East or are we reacting to them? That’s an unanswered question for me.”

Saturday would have been Chris Cousins’ 43rd birthday. It’s the latest in a series of difficult and emotional milestones since his death last August.

Those of us who loved him will mark the occasion in different ways. Saturday is also World Whisky Day, so there’s a harmonic convergence for folks who want to raise a glass in his honor. A better way might be to surprise someone you care about with a gift bottle of whisky. That’s what Chris would do.

Whisky doesn’t agree with me and I have to umpire five baseball games within 48 hours, so an honorary dram would be a really bad idea. I’ll find another way to honor his memory. I’ll look for an opportunity to summon the courage to show kindness at a moment when it would be easier to walk away. Not being afraid to show kindness was the way he lived his life.

Then when I’m done with all my games, I’ll have a “shower beer” in his honor. Here is your soundtrack. — Robert Long

Today’s Daily Brief was written by Michael Shepherd and Robert Long. If you’re reading this on the BDN’s website or were forwarded it, click here to receive Maine’s leading newsletter on state politics via email on weekday mornings. Click here to subscribe to the BDN.

A weak disturbance will drop down from the northwest tonight triggering some snow showers across Fort Kent and vicinity as it moves through with no significant accumulation expected.
Our Sponsors END_OF_DOCUMENT_TOKEN_TO_BE_REPLACED