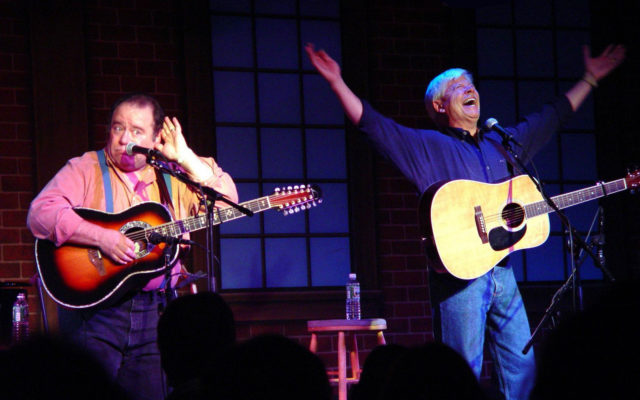 Contributed • May 3, 2019
The Center for Advancement of Rural Living will continue its efforts to revitalize the Caribou Performing Arts Center when a popular Maine duo, brothers Chuck and Steve Romanoff of Schooner Fare, bring their folk and acoustic music to The County on Friday night, May 31.

CARIBOU, Maine — The Center for Advancement of Rural Living will continue its efforts to revitalize the Caribou Performing Arts Center when a popular Maine duo, brothers Chuck and Steve Romanoff of Schooner Fare, bring their folk and acoustic music to The County on Friday night, May 31.

The brothers are beginning their 44th year as Schooner Fare. They share lively concerts with folks of all ages, combining music and their unique brand of Maine humor and singing such signature original songs as “Portland Town,” “Day of the Clipper,” “We the People” and, written in praise of Aroostook, “The County Song.”

Lisa Prescott, president of the CARL board of directors, said bringing Schooner Fare back to The County will tap into memories of when CPAC was a destination point for a variety of entertainment.

“Schooner Fare became one of the most popular acts and performed at CPAC several times,” said Prescott, who was recently appointed to a second term as board president.  “We know that many people remember them and they are great fun because many fans know the words to their songs. We are delighted that we will have them here again.”

Schooner Fare has won unanimous critical praise over their 40 years for captivating harmonies and winning stage presence. Their 15 albums include traditional folk tunes, original songs on both contemporary and traditional themes, as well as topical songs, country ballads, and maritime masterpieces.

According to Prescott, their energetic concerts are laced with a Maine brand of universal humor. Chuck and Steve combine their talents on six- and 12-string guitar and banjo to craft their distinctive vocal and instrumental arrangements. They recently recorded with Makem & Spain on their new CD, “Sessions Vol. 1,” which includes cuts by Noel Stookey, Tom Paxton, Roger McGuinn, David Mallett, Bill Staines, Jonathan Edwards, The Shaw Brothers, Eileen Ivers and Gordon Bok.

The revitalization of the Performing Arts Center has been made possible thanks to local businesses and Cary Medical Center. CARL is still looking for additional event sponsors.  For more information on how businesses can become involved, call the Center for Advancement of Rural Living at (207) 492-2375.

Tickets to the Schooner Fare performance will be on sale soon and will be available at Options in Caribou, Sleepers in Caribou, the Aroostook Center Mall in Presque Isle and Hebert’s Rexall in Van Buren.

A warm front will approach the Valley today and cross the region this evening.
Campaign Corner END_OF_DOCUMENT_TOKEN_TO_BE_REPLACED

Dale Crafts filed his nomination papers for Feb. 21 with the Secretary of State to officially be placed on the primary ballot on June 9, 2020, for the U.S. House of Representatives 2nd District race.
Our Sponsors END_OF_DOCUMENT_TOKEN_TO_BE_REPLACED