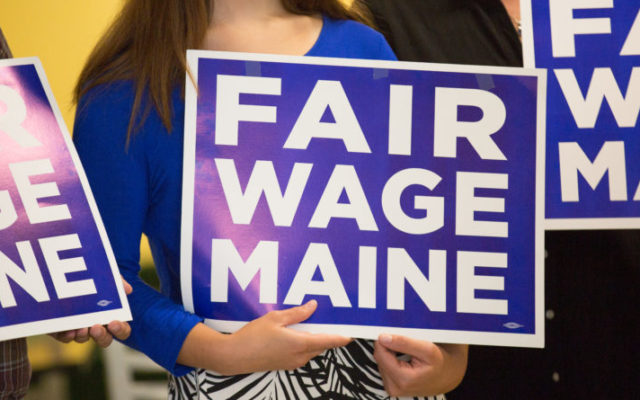 Alex Acquisto, The Forecaster • April 12, 2019
Democrats in the Maine House of Representatives effectively killed a handful of Republican-backed bills on Thursday that were designed to slow the state’s voter-approved minimum wage hikes or offset its impact on employers.

Democrats in the Maine House of Representatives effectively killed a handful of Republican-backed bills on Thursday that were designed to slow the state’s voter-approved minimum wage hikes or offset its impact on employers.

After Republicans advocated in floor speeches for four bills that they say would provide relief to small business owners or make it possible for them to hire and train young workers, the House voted mostly along party lines to uphold legislative committee recommendations that those bills “ought not to pass.”

With their solid majority, House Democrats made relatively quick work of the latest Republican efforts to stymie incremental minimum wage increases approved by voters in late 2016.

A year later, lawmakers and Republican Gov. Paul LePage moved to repeal a portion of that law and restore the state’s tip credit. Under that portion of the law, tipped workers are paid an hourly wage that’s half of the minimum wage, based on the expectation the tips they receive will exceed their overall earnings to more than the state’s hourly minimum.

Both went into effect in 2017, when Maine’s hourly minimum wage increased to $9. The minimum wage has risen $1 each year since and will do so until it hits $12 in 2020. Each subsequent year’s minimum wage will be adjusted to correlate inflation.

The rejected bills on Thursday included one from Rep. Richard Bradstreet, R-Vassalboro, to establish a youth minimum wage for 16- and 17-year-old workers that’s $1 less than the regular minimum wage, $2 less for 15-year-olds and $3 less for anyone age 14 and under. The Democrat-controlled chamber voted 84-57 against it.

Three other bills — one from Rep. Shelley Rudnicki, R-Fairfield, another from Rep. Joel Stetkis, R-Canaan, and a third from Rep. Dustin White, R-Washburn — aim to create minimum wage alternatives to better accommodate smaller Maine employers. Under Rudnicki’s bill, which was rejected 90-49, employers with annual gross sales less than $500,000 could set their minimum wages at $9.75 in January 2020 with annual increases correlating with cost-of-living increases.

Stetkis’ bill, which the House voted 83-58 to reject, seeks to adjust that slightly, beginning in October. Any employer with fewer than 50 employees would pay a $10 minimum wage, and a company with at least 50 workers would remain at $11 until early 2020 when it would increase to $12. His bill would also delay indexing the minimum hourly wage for cost-of-living adjustments until 2022.

White’s bill, which was rejected without a roll-call vote, aimed to set the general minimum wage at $10 and remove the provision of state law that requires an annual wage increase to correlate with cost-of-living increases.

All four bills now move to the Senate, which is also controlled by Democrats and where they are likely to die.

As the Maine Turnpike expects 1 million travelers alone over the Labor Day weekend, policymakers are gearing up for a sprint to solve one of the state’s most intractable problems: a long-standing — and growing — transportation funding gap.
Apex Weather END_OF_DOCUMENT_TOKEN_TO_BE_REPLACED

A cold front moved through the Valley early this morning, and it will be followed by an Arctic cold front this afternoon.
Campaign Corner END_OF_DOCUMENT_TOKEN_TO_BE_REPLACED

U.S. Senator Angus King (I-Maine) today visited with students at the University of Maine at Fort Kent (UMFK) to discuss his work in Maine and Washington and answer questions from students.
Our Sponsors END_OF_DOCUMENT_TOKEN_TO_BE_REPLACED