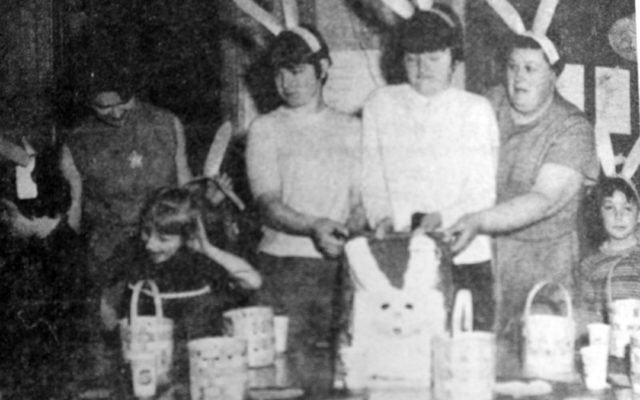 Contributed • April 10, 2019
50 Years Ago --April 10, 1969 Vandals Damage VB High -- In the fourth incident of vandalism at Van Buren District High School this year, someone broke eight window panes, four in the front doors of the building and four more in the principal’s office.

Vandals Damage VB High — In the fourth incident of vandalism at Van Buren District High School this year, someone broke eight window panes, four in the front doors of the building and four more in the principal’s office. Damage thus far this year will cost taxpayers an estimated $2,200. Discussing the incident, Romeo Marquis, principal, said that all of the windows were of double thickness.

Chiasson Fur Store Swept By Fire In Edmundston — Fire of unknown origin swept through the modern business establishment of L. Chiasson Furs early last Thursday morning, completely destroying the main section of the building together with a large stock of luxury furs. Edmundston fire chief Hermel Berube said the outbreak is believed to have started in the workshop at the rear of the structure and spread through the front of the building.

What Time Is It? — It’s worth $200 and the time is 6:25 p.m.-the time that the ice went out on the Fish River in Fort Kent near the station. Danny Nicolas is the holder of the winning ticket. The annual ice-out contest is a fundraiser for the Green Bean Ski Club and Lonesome Pine Trails. Thanks to all those who supported the project.

Bilingual Inventor — The bilingual education program at Gateway School have had special French activities for two weeks, these activities were all done in French and occurred during the SSR period. Some of the activities were learning French songs and dances, reading a French story, playing games and bingo in French and inviting inventors like Rosaire Sirois to explain to grade 6 students about some of his many inventions.

Bus Service To The St. John Valley Given Second Life –– Members of the St. John Valley Public Transportation Authority met last Wednesday with Joe Cyr, owner of Cyr Bus Line, and representatives from Maine DOT to discuss the future of the daily bus service that connects the Valley to Bangor. The daily bus service was the product of over a year of work and dedication by members of the SJV-PTA, Maine DOT, and Cyr Bus Lines. It began on a six-month trial basis Nov. 15, but Cyr recently said the number of travelers to date was not enough to continue service.

As the Maine Turnpike expects 1 million travelers alone over the Labor Day weekend, policymakers are gearing up for a sprint to solve one of the state’s most intractable problems: a long-standing — and growing — transportation funding gap.
Apex Weather END_OF_DOCUMENT_TOKEN_TO_BE_REPLACED

A cold front moved through the Valley early this morning, and it will be followed by an Arctic cold front this afternoon.
Campaign Corner END_OF_DOCUMENT_TOKEN_TO_BE_REPLACED