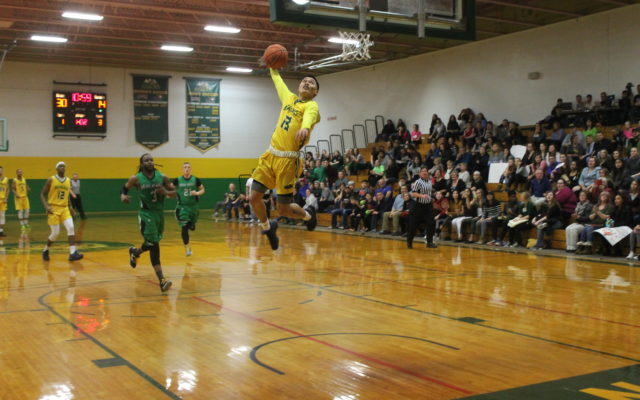 Thomas Enerva and Bobby Syvanthong, both of whom graduated from UMFK last spring, played this year on team Luang Prabang, representing the country of Laos against seven other professional Asian teams including three from Thailand, two from The Philippines, and one each from Malaysia and Singapore.

A third player on the Luang Prabang team, Jose Nouchanthavong, is a Westbrook High School graduate and former standout on the University of Southern Maine men’s basketball team. 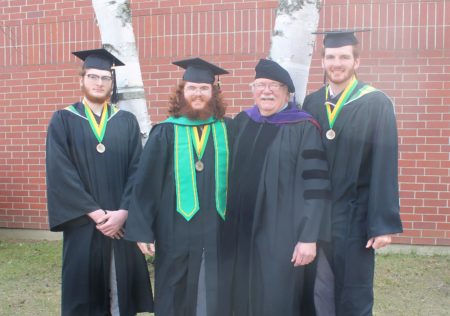 Graduation day at UMFK on May 12, 2018, was special for the Enerva family, from left, Joseph Enerva, Samuel Enerva, Tony Enerva, and Thomas Enerva.
(Jessica Potila)

Enerva, a 2012 Fort Kent Community High School graduate, is the son of former UMFK professor of public safety administration and criminal justice Tony Enerva. Thomas Enerva said he was proud to represent his hometown of Fort Kent in the tournament.

“This is the first time Laos ever placed anywhere in any basketball competition so it is very big for the country. My coaches, they had interviews across the country of Laos just for the sheer fact this is an inspiration for the people that live there and play basketball. It is a growing sport there and this was a huge reward for everyone,” he said. “I’m happy to be from Maine as well and to represent Fort Kent.”

Enerva said that playing basketball in Laos was much different from playing in northern Maine.

“It was very hot, like 100 degrees a couple of days and humid, and we trained in some conditions where it’s not like back home with air conditioning in every building. In Laos we had more like air vent fans on in some of the gyms but it worked out good for us; it helped us get in shape and improved our cardio so when we did play in the competitions in arenas where there was air conditioning it helped us in the games,” Enerva said.

Enerva said Laos is similar to Fort Kent in that people are very close to their families and enjoy being outdoors.

“The people are very friendly (in Laos). They  have a lot of pride in their sports, especially basketball,” he said. “People here enjoy those little things like to be outside and enjoy each other’s company. People love to eat out here; we just eat all the time. It’s very hard to find upset Thai people.”

Syvanthong was selected as the best point guard in the tournament, an achievement which does not surprise UMFK men’s basketball coach Tom Bird. .

“Bobby was and still is one of the best players that has played for (UMFK). He changed the way we play here forever with his uptempo style. I had no doubt Bobby would be successful in whatever he did and I hope he gets a shot on a team full-time somewhere in the near future,” said Bird.

Heavy snow is expected to overspread the Valley this afternoon and continue into the evening hours.
Crown Politics END_OF_DOCUMENT_TOKEN_TO_BE_REPLACED

Maine’s longest serving legislator, Martin was first elected to the Maine House of Representatives in 1964 when he was 23.
Our Sponsors END_OF_DOCUMENT_TOKEN_TO_BE_REPLACED