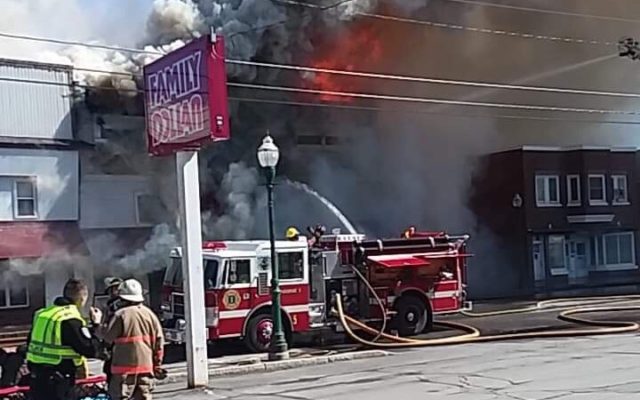 Fire destroyed a pair of downtown buildings on Main Street in Van Buren Sunday morning with firefighters from multiple communities still dousing the smoldering structures late in the afternoon.

The Van Buren Police Department advised residents to avoid Main Street, from the Family Dollar store to Katahdin Bank, until further notice. A detour was set up on Champlain Street to redirect traffic.

Power was shut off to the area as firefighters from Van Buren, Grand Isle, and Limestone and from across the St. John River in St. Leonard, New Brunswick, kept pouring water onto the structures to prevent the fire spreading to neighboring buildings.

Town Manager Nancy Troeger said mid-afternoon that she was still “numb” from the news.

She said around 3 p.m. that two ladder trucks had been spraying water on the buildings since the fire department arrived shortly after the fire started around 9:30 a.m. Tankers from the Grand Isle Fire Department kept making runs back and forth to get more water from other areas of town for the ladder trucks.

The two structures gutted by the fire are known locally as the original Hebert Rexall Pharmacy building and the Ezzy Insurance building. Two tenants living in the apartments above the commercial properties were OK but lost all their belongings, according to Troeger.

The Red Cross was called in to assist the two tenants who “lost everything because their homes are gone,” she said.

One tenant who taught martial arts classes from one of the storefronts also “lost all of his equipment that was in his gym,” Troeger said. “He taught classes three times a week. He’s lost all of his materials, but he’s going to keep going.”

The town manager said the firefighters were working hard to make sure the adjacent buildings were safe and that Main Street would be closed until further notice.

She said volunteers had been visiting the site throughout the day to bring snacks, water, and other necessities to the firefighters and first responders.

“The firefighters are going to stay on it for as long as they need to to make sure it’s not going to flare back up,” Troeger said. “I just want to thank everyone who is helping out here today, and thank you for thinking about us, the people immediately affected, and the community as a whole.”

Cloudiness in the region Thursday afternoon along with a slight chance for isolated showers Thursday night and Friday.
Crown Politics END_OF_DOCUMENT_TOKEN_TO_BE_REPLACED

The Aroostook County Republican Committee will hold their election year County-wide caucus from 9 a.m. to noon on Saturday, Feb. 12, at the Presque Isle Inn & Convention Center.
Our Sponsors END_OF_DOCUMENT_TOKEN_TO_BE_REPLACED