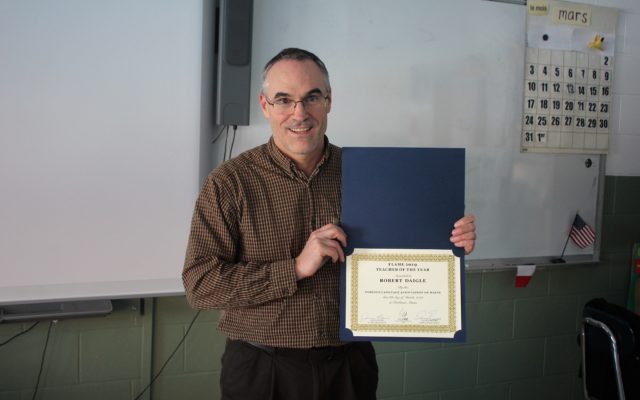 Jessica Potila, SJVT / FhF Staff Writer • March 26, 2019
Educator Robert Daigle knew from a young age he would become a teacher, although his passion for teaching the French language was not immediately apparent to Daigle.

FORT KENT, Maine — Educator Robert Daigle knew from a young age he would become a teacher, although his passion for teaching the French language was not immediately apparent to Daigle. A beloved grandmother’s death would prove pivotal in Daigle’s decision to reclaim his own relationship with the French language and ultimately to be named 2019 Maine Foreign Language Teacher of the Year.

The son of a Fort Kent potato farmer, Daigle grew up with the French language being spoken freely among his family members, including a French Canadian grandmother who spoke no English at all.

However, while attending elementary school, Daigle lost much of his proficiency in the language.

“My French language was extra baggage I was supposed to check at the door when I came into school,” Daigle said. “There was so much pressure on the school district to have the same scores as the rest of the state on standardized tests; there was a lot of pressure to assimilate and be able to compete with English only school districts.

“By the time I was 8 years-old I had lost the ability to communicate in French with ease. I was passively bilingual. I could understand French but my ability to formulate sentences (in French) was really washed away with the school system,” he said.

When Dagle’s grandmother passed away during the end of his freshman year in high school, he recognized the impact his disconnect from the French language had on his life.

“At the funeral I stood at my grandmother’s casket to pay my respects. To me, I was paying respects to a familiar stranger. I’d had her around in my life for years, but I’d had very few conversations with her after the age of 8,” Daigle said. “That moment marked me with really, really deep regret.”

Following his first year of college, Daigle participated in a French immersion program at Universite Laval in Quebec.

“My mom picked me up and I asked her not to speak any more English to me,” Daigle said. “On that day I embarked on a journey to reclaim my heritage. Once the dam burst it flooded out and I realized this is what I had wanted forever.”

For the past ten years, Daigle, who lives in Fort Kent with his wife Jessica and their two young daughters, has taught French at Fort Kent Community High School and Valley Rivers Middle School.

The annual award recognizes those who have achieved outstanding results in teaching modern or classical languages, according to the Foreign Language Association of Maine.

“Robert not only teaches French, he lives it and brings it to life for his learners,” CHS Principal John Kaleta said. “Robert’s true passion is the phenomenal work he has done linking the students of our school to their French heritage. As most know, the St. John Valley has a rich French heritage that is slowly becoming homogenized with mainstream American culture. He has initiated an exchange program between our school and Cholet, France. Cholet was chosen as it has many common descendants with our community.”

Ninety percent of CHS students have French ancestors, according to Daigle.

“I’m planting seeds that might not grow for quite awhile, but if I provide this rich experience, years down the road they’ll look back and be very thankful for it,” he said.

“My philosophy as a language teacher is that four walls of the classroom are not the best place to teach a language. I’m constantly finding ways to bust down those walls and the exchange program allows me to completely throw away those walls.”

A total of 52 students and 8 different staff members have traveled to France as part of the exchange program so far, an average of 10 people per year. On this side of the Atlantic, Daigle’s program has hosted 78 students and 4 different adults from France, about 13 per year, since the first visit in October 2013.

“Through an ongoing genealogy project, Robert encourages every student he teaches to research their French heritage and understand their family roots. As we say in education, this gives his students the, ‘Why to their What.’ He shows students why they’re learning what they’re learning, in hopes of kindling a fire for the French language,” she said.

“Robert is very professional, highly knowledgeable and genuinely passionate about the French language. Not only does he teach the language and francophone culture, but he also works on critical and analytical skills. He has an uncanny eye for detail, a unique way to convey knowledge, plus a bonus sense of humor,” she said. “It is without reservation that we recognize Robert Daigle from Fort Kent.”

Joey Ouellette was the only one of three candidates for Fort Kent Town Council who participated in a public Candidate’s Forum held Monday, March 16.
Apex Weather END_OF_DOCUMENT_TOKEN_TO_BE_REPLACED

Showers are expected this afternoon continuing into the evening hours before tapering off overnight behind the front.
Our Sponsors END_OF_DOCUMENT_TOKEN_TO_BE_REPLACED