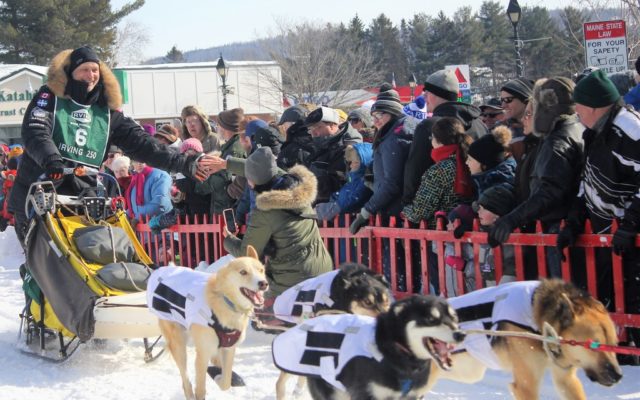 FORT KENT, Maine — And they’re off.

Some very excited sled dogs ran down the middle of Main Street in Fort Kent Saturday morning pulling mushers behind them as the Can-Am Crown International Sled Dog Races kicked off.

Despite the temperature hovering at minus 2 degrees Fahrenheit, fans lined both sides of the street, which was packed with plenty of snow overnight to create the runway for the races.

Participants in the Pepsi Bottling and Allen’s Coffee Flavored Brandy Can-Am Crown 30 headed out one at a time beginning at about 9:10, while the signature Irving Woodlands Can-Am Crown 250 kicked off around 10:20. 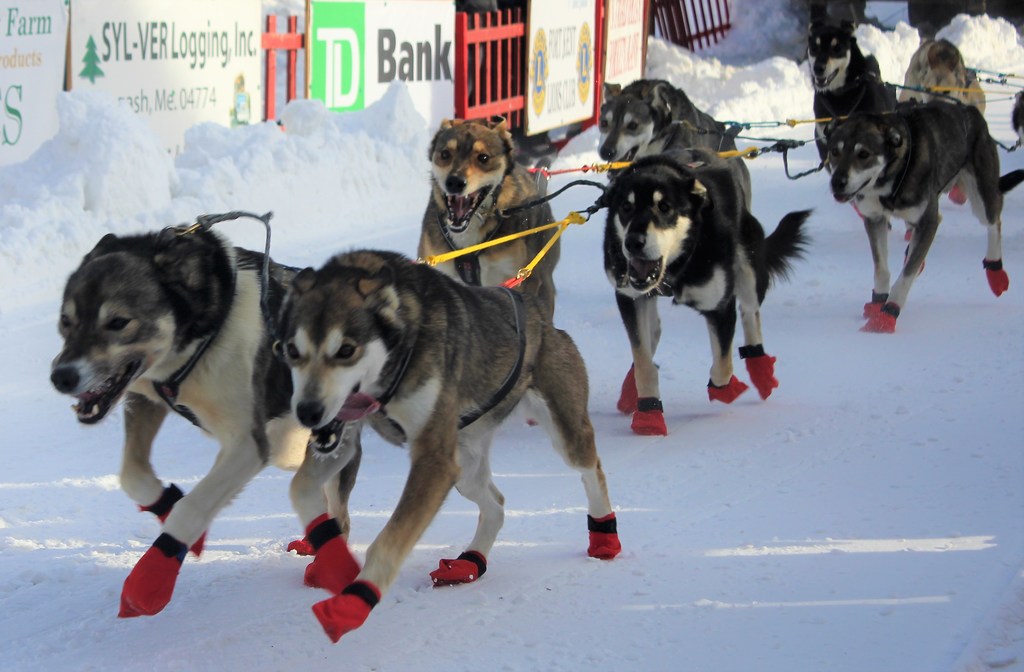 Irving sponsored a food tent which provided free hot dogs, hamburgers and chili prepared by Peter Pinette of Rocks Diner through late morning near Valley Motors on Main Street. Official Can-Am souvenirs also were for sale at the car dealership until 11:30 a.m.

The staging area near the starting gate was filled with more dogs than people as mushers prepared their gear and hooked up their dogs before the races.

Can-Am President Dennis Cyr said organizers decided to add additional gates around the staging area to reduce the amount of spectators around the dog teams.

“It makes it easier to get the teams up to the start line,” Cyr said.

As the day progressed temperatures climbed to the lower double digits and scores of fans packed Main Street to cheer on their favorite dog sled teams.

“The weather cooperated, we have a good crowd,” Cyr said.

Veteran musher Ashley Patterson, 34, of Shirley helped send off  her husband Mark on in his first 100 mile race before completing her own final checklist to ensure she and her dogs were prepared for the 250.

“The number one thing we do is pack snacks for the dogs,” she said.

The safety and comfort of the dogs is paramount, Patterson said. 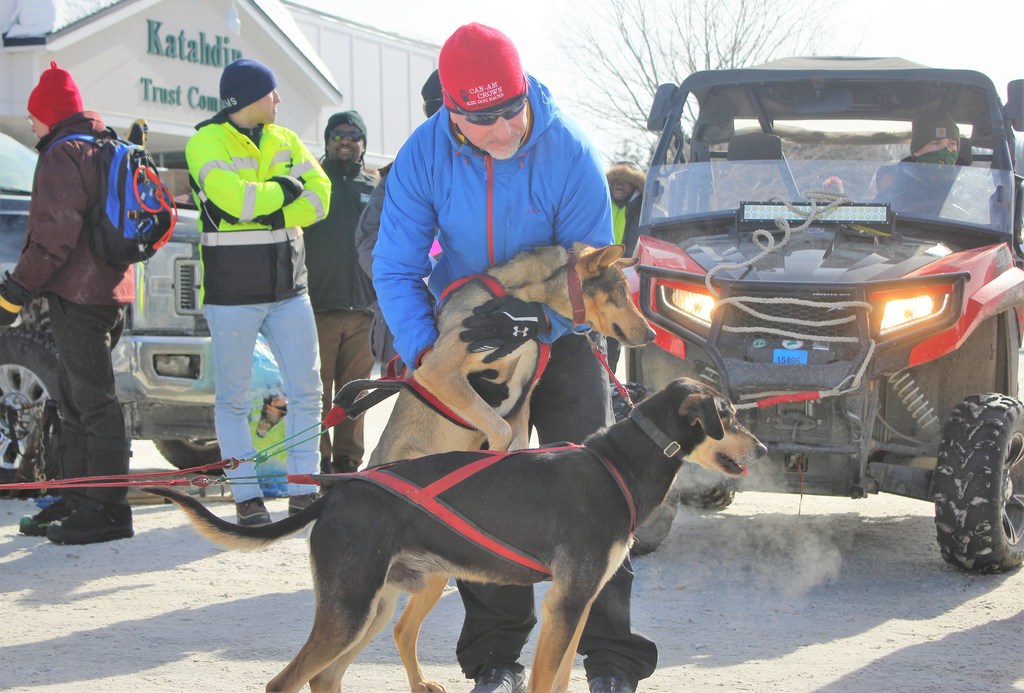 “At the first checkpoint it’s important that we put down straw and lay them down, and give them a rest,” she said. The mushers also get a chance to warm up and get something to eat at each of the four checkpoints on the 250-mile trail. The course heads southeast from Fort Kent to Portage, then west into the North Woods before turning north again in the wilderness up through Allagash and back to Fort Kent.

Patterson said she lost count of how many years she has raced in the Can-Am, but that this will at least be her 15th year. This year, she said she put younger dogs on her team, but has trained them running more than 2,400 miles in preparation.

“Your dogs are a reflection of how much work you put in. So the better you do, the better the dogs do,” she said. “But you’ve got to put the dogs first, the dogs have to come first,” she said.

After the last team left the starting gate Saturday morning, locals paraded antique snowmobiles down Main Street to entertain the crowd a bit longer, before many headed off to Lonesome Pine Trails to await the arrival of Can-Am 30 mile teams who will cross the finish line there first in the afternoon. 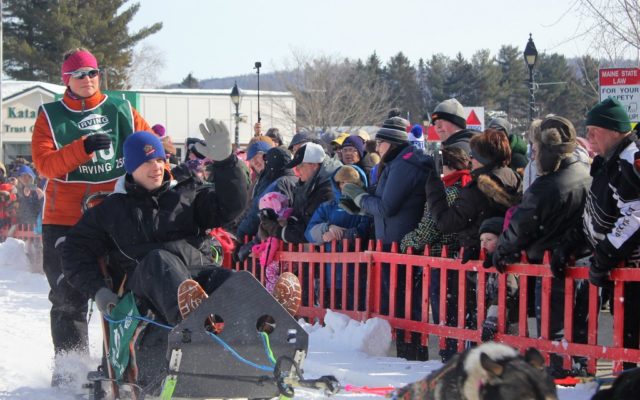 U.S. Rep. Jared Golden takes a ride down Main Street in Fort Kent on the sled of musher Amy Dionne at the start of the Can-Am Crown International Sled Dog Races on Saturday morning. (Jessica Potila) 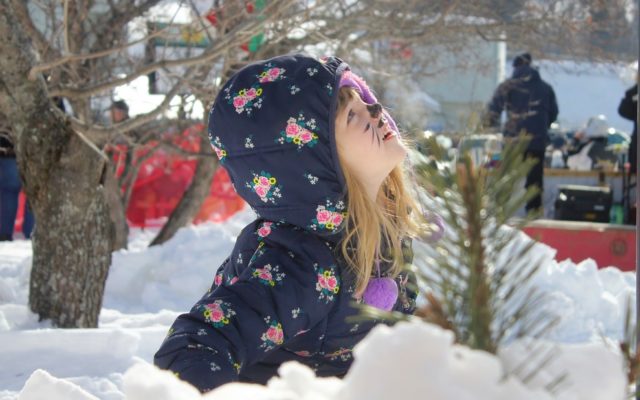 A little girl whose face is painted like a puppy has some fun playing in the snow while attending the start of the Can-Am International Sled Dog Races in Fort Kent on Saturday, March 2. (Jessica Potila) 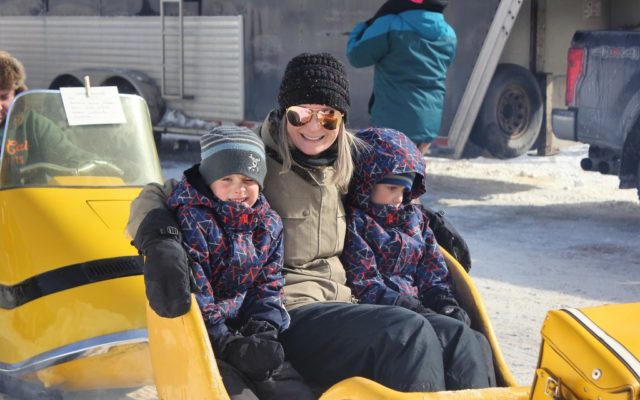 As the Maine Turnpike expects 1 million travelers alone over the Labor Day weekend, policymakers are gearing up for a sprint to solve one of the state’s most intractable problems: a long-standing — and growing — transportation funding gap.
Apex Weather END_OF_DOCUMENT_TOKEN_TO_BE_REPLACED

The Valley will receive an inch or less of accumulation from Thursday's system based on current forecast model data.
Our Sponsors END_OF_DOCUMENT_TOKEN_TO_BE_REPLACED