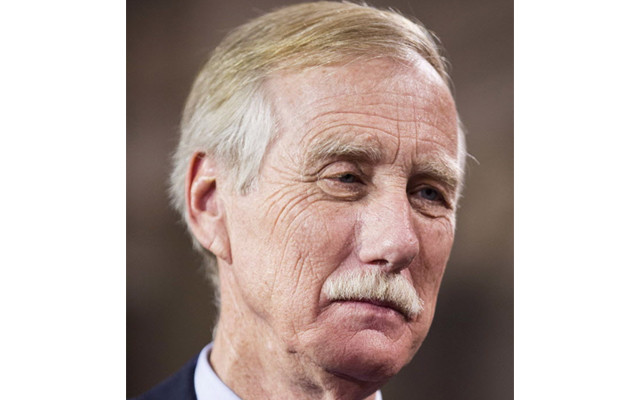 U.S. Sen. Angus King (I-Maine), Special to the Fiddlehead Focus • February 24, 2019
I’ve served as a member of the Senate Intelligence Committee and the Senate Armed Services Committee for the last six years, and over that time I’ve reached two vital conclusions.

I’ve served as a member of the Senate Intelligence Committee and the Senate Armed Services Committee for the last six years, and over that time I’ve reached two vital conclusions. First: we live in a complex world, filled with a wide range of threats to America’s national security. And second: in order to make good decisions on how best to react to these threats, we need good intelligence on the scope and magnitude of the challenges we face.

Fortunately, we have an intelligence community filled with patriotic, dedicated, and hardworking Americans. They are not infallible, but they represent the information and insights gleaned through intense work and investigation around the world — and their commitment is second to none. Their work is worthy of our serious consideration, and that’s exactly what the Senate Intelligence Committee did during a recent hearing, when the nation’s top intelligence officials came before our committee to assess the threats we are facing. Dan Coats, the director of national intelligence, put it best at the beginning of the hearing, when he said that the mission of the intelligence community was to “seek the truth, and speak the truth.”

During our hearing, leaders of our intelligence community emphasized a number of important challenges, ranging from problems we’ve been facing for years — for example, the threat of nuclear weapons in the hands of rogue nations — to some methods of attack that are still developing. One of the newest, and most dangerous, challenges we are currently facing is the threat of ‘deepfake’ videos. The concept is fairly straightforward: with manipulation technology, we are able to create or alter videos to show someone saying or doing something that never actually occurred. Think ‘movie magic’ — bad actors are able to create videos showing candidates doing something they never actually did. This is one of the potential new ways that foreign governments can expand the election interference they began during the 2016 election. This also has enormous implications for every American, as alterations are easy and can lead to harm to reputations, and could be used for a new form of cyberbullying.

Deepfakes are an excellent example of how, in our increasingly connected world, more and more of our national security threats will come from technological vulnerabilities. That’s why the relationship between Huawei, a Chinese telecommunications company, and the Chinese government, is increasingly concerning, and why it also came up during this hearing. Huawei needs to decide if they are going to be a worldwide technology company or an agent of the Chinese government. They can’t be both, but right now, they’re trying to do just that. The idea of Huawei helping to connect the world, while simultaneously working hand-in-hand with Chinese government officials to advance the nation’s interests should concern every global consumer — and I think the global marketplace should hold them accountable.

These actions by the Chinese state are extremely worrisome on their own, but the concern only grows when viewed through the lens of arguably the gravest threat discussed at our hearing: the increasing cooperation between China and Russia. For generations, these two countries have been rivals, but now they are starting to come together. These two countries are making serious investments in the technologies of the future, like artificial intelligence, and share a common interest in undermining Western democracies in order to create a world that is more hospitable for autocratic regimes. That is an ideological threat to the United States and our closest partners; to protect our values we need to reassert our commitment to our friends and allies, invest in the technologies of the future to keep the U.S. at the forefront of technological research, and keep an eye on the threat on the horizon posed by this growing relationship between China and Russia.

Let’s go back Coats’ statement, “to seek the truth, and to speak the truth.” From where I sat during that hearing, these officials did just that, even when their assessments of the situation differed from that of the commander-in-chief, so it disturbed me that, following the hearing, the president attacked these leaders via Twitter, dismissing their analysis outright and even insulting them by saying they should “go back to school.” And even worse, his lack of consideration to the opinion of military leaders doesn’t appear to be a one-time reaction; just days later, General Joseph Votel, the commander of U.S. Central Command who oversees our troops in the Middle East and Central Asia, told me during a different committee hearing that he was not consulted before the president’s decision to announce a withdrawal of troops from Syria.

The commander-in-chief has the right to disagree with the counsel he receives, but to not even request that counsel is extremely worrisome. If you study our history, it’s clear that our worst foreign policy misadventures have been often based on one of two things — either bad intelligence, or intelligence that was somehow skewed in order to meet the desires of the policymakers. If we want to avoid the mistakes of the past, we need to start by studying all of the information we have available to us — and we can’t do that without trusting that our Intelligence officials and military officials will give us their best assessments and advice. We need to let them do their job, without undermining their contributions to national security.

High pressure to the east and and trough to the west will place the region in an area of southerly flow today, which will draw increasingly moist air into the region.
Our Sponsors END_OF_DOCUMENT_TOKEN_TO_BE_REPLACED