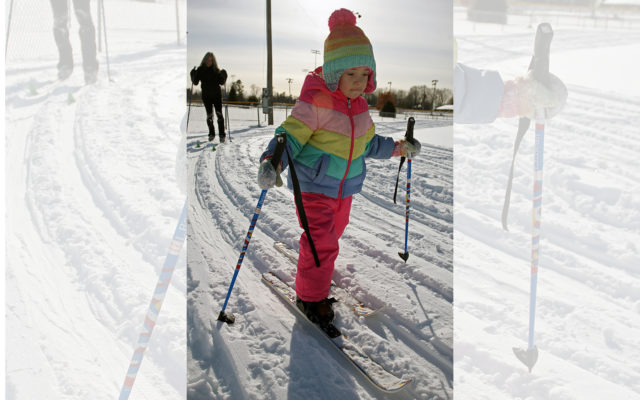 “I love skiing,” she said Thursday. “But after awhile, it can get a bit boring, especially if you pretty much do the same trails like I do.”

A search for an equally aerobic, exciting winter sport prompted her to take up a friend’s recommendation and try snowshoeing in December.

“I loved it instantly,” she said. “I went out and bought myself all of the equipment, and now I am really happy. My friends and I have gone out every weekend since the start of the year. We have certainly got enough snow to do it.”

With the onset of an early winter last year, when the first snow fell in Aroostook County in October, some sporting goods stores across the region have seen an uptick in business. Others have said that business has been as steady as it has been in past winters.

Jesse Jalbert is the sporting goods manager at Up North Outdoors in Fort Kent. He said Thursday that he has seen an uptick in business this winter in some areas.

“It is especially noticeable in the ice fishing department,” he said. “We are having a very successful ice fishing season up here, especially for those who fish Long Lake. The fishing has been really good so far, with people saying that the fish are bigger and the catch is more plentiful.”

In other areas, business has been slower.

“While we did have snow early in the season, we had that significant rain in December,” he said, referring to the “solstice soaker” that wiped out half of the snowpack. “That put a damper on a lot of outdoor activities for a bit.”

At the same time, he said that customers are starting to purchase more snowshoeing gear.

“We are certainly seeing more people interested in that sport,” he said. “Our sales of snowshoes are typically heavier in February and March, because the days are longer and there is more light. Some people also use the equipment to get in shape for spring.”

Snowshoeing equipment also is going steady at Bike Board and Ski in Presque Isle, along with a new type of sporting equipment.

Andrew Bouchard, the owner of the sporting goods store, said that the early snow prior to the holiday season helped sales and “got people excited.”

“We saw a bump in sales there, but then the warmer temperatures came, and so did that rain,” he said. “That took away a lot of the snow and caused a bit of a lull here. Then, it got so cold over the past two weeks that people really weren’t going outside that much.”

“It is basically a short, fat ski that has universal bindings, so they can be used with any kind of boot,” he said.

According to the company’s website, the Hok is designed to work as easy backcountry ski. It has short, wide dimensions that makes it very maneuverable.

“The first shipment we got in, we sold out of one of the two available sizes,” Bouchard noted. “We ordered some more. We are still fairly well stocked as far as winter gear.”

Up in Caribou, Myron Hale, owner of County Sports, said that sales of snowmobiles are “good, and going pretty steady.”

“We are not really seeing more sales right now because we pre-sell a lot of our machines in the spring,” he said. “That accounts for the majority of the sales, as does the sales we make in the fall, which is generally our busiest time.”

He said that the business mainly has customers coming in now to purchase snowmobiling accessories, such as clothing and helmets.

“The rain we had put a damper on the industry for a bit,” he acknowledged. “But now we are getting record setting snow, which is much better. Thus far, I don’t really believe there has been a lot of people from downstate or from out of state up here snowmobiling. The rain and the cold we had turned a few people off.”

“I actually sold two sleds this week,” Hall continued. “Business is good and strong as always, but I don’t believe that sales have been any greater than in past years.”

The upper-level low pressure area that has been parked over southern New England will continue to stall there today into the overnight period then begin to open up and shift southeast into the Atlantic Thursday.
Campaign Corner END_OF_DOCUMENT_TOKEN_TO_BE_REPLACED

Dale Crafts filed his nomination papers for Feb. 21 with the Secretary of State to officially be placed on the primary ballot on June 9, 2020, for the U.S. House of Representatives 2nd District race.
Our Sponsors END_OF_DOCUMENT_TOKEN_TO_BE_REPLACED