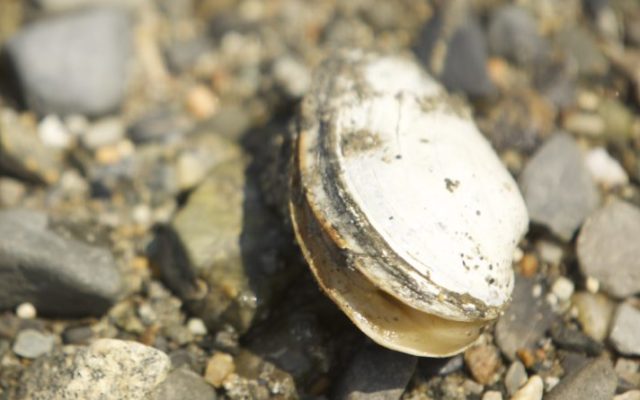 Hey, don’t eat those clams. They could hold the key to finding a cancer cure.

Beth Brogan, BDN Staff • February 5, 2019
A recent study by researchers at Bigelow Laboratory for Ocean Science in East Boothbay indicates that bivalves — shellfish such as oysters, clams and mussels — may hold the key to new techniques to fight diseases in humans.

A recent study by researchers at Bigelow Laboratory for Ocean Science in East Boothbay indicates that bivalves — shellfish such as oysters, clams and mussels — may hold the key to new techniques to fight diseases in humans.

A paper published in the journal Developmental and Comparative Immunology suggests that studying bivalves as model organisms could provide clues to cures for diseases such as flu and cancer, and new technologies such as bone regeneration.

“Model systems like mice and flies have been invaluable to biology, but there is no such thing as a model system that can answer all the important questions,” said Jose Fernandez Robledo, senior research scientist at Bigelow Laboratory for Ocean Sciences and lead author on the paper. “There is a lot of potential for bivalve research to offer unique insights into new solutions.”

Oysters are exposed to bacteria and viruses just like humans, but fight off pathogens without antibodies, the proteins that mammal immune systems use to attack disease.

Clams can contract a contagious cancer, but also can cure themselves of it without antibodies.

“Clams don’t have chemotherapy or radiation, and somehow they are able to get rid of cancer,” Fernandez Robledo said. “How on earth do they do it? Their strategy can give us clues about how to fight cancer in humans.”

Studying immunity in bivalves could help researchers find an alternative to antibiotics, which are becoming more resistant to pathogens. And mimicking the antimicrobial compounds that mussels produce may yield new drugs for humans and livestock.

Robledo’s team is working to develop the molecular tools needed to study the bivalve genomes. The oyster genome, recently sequenced, contains 28,027 genes, but researchers don’t yet know what most of them do.

Recently, study author Adrienne Tracy was able to introduce DNA into oyster blood cells in Robledo’s laboratory, which will allow researchers to test hypotheses about the function of specific genes. Robledo hopes to develop an oyster cell culture that would allow researchers to work from a genetically uniform stock and compare results.

As they study how bivalves could help humans, the research could also help the shellfish industry, as Robledo plans to develop recommendations to guide farmers and hatcheries in breeding bivalve stocks for resistance to disease, and for development of strong shells and rapid growth.

The upper-level low pressure area that has been parked over southern New England will continue to stall there today into the overnight period then begin to open up and shift southeast into the Atlantic Thursday.
Campaign Corner END_OF_DOCUMENT_TOKEN_TO_BE_REPLACED

Dale Crafts filed his nomination papers for Feb. 21 with the Secretary of State to officially be placed on the primary ballot on June 9, 2020, for the U.S. House of Representatives 2nd District race.
Our Sponsors END_OF_DOCUMENT_TOKEN_TO_BE_REPLACED