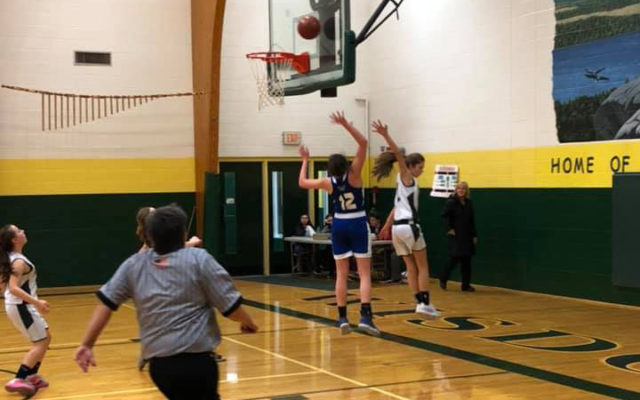 “I think I had an idea, because the crowd was kind of excited,” said the 18-year-old Dugal. “I had just missed two foul shots before that, so when I stole the ball, I knew that was going to be my 1,000th point.”

Her coach, Dean Gendreau, said he was not necessarily keeping track but that it was something the other girls had tallied up.

“The seniors had the countdown going before I did,” he said. “We didn’t talk about the how many points she had, everyone just kinda knew.”

Dugal scored her 1,000th point after nearly 70 high school career games. The tally of points dated back to her first game as a freshmen.

“The girls are excited for her,” Gendreau said. “It’s her accomplishment, but I think they all just share it with her.”

While Gendreau said Dugal could “play at another level after [high school],” Dugal said her next goal is to take her team to playoffs in Bangor.

Gendreau said the team had only been to Bangor once in the last three years, so this would make it Dugal’s second year to go. “Right now, I think she really wants to lead her team to the tournament,” Gendreau said.

“My teammates were very helpful in getting me there, my coaches over the years, and just playing the game a lot,” she said, turned her into the player she is today.

As the Maine Turnpike expects 1 million travelers alone over the Labor Day weekend, policymakers are gearing up for a sprint to solve one of the state’s most intractable problems: a long-standing — and growing — transportation funding gap.
Apex Weather END_OF_DOCUMENT_TOKEN_TO_BE_REPLACED

A strong Arctic cold front will push into the region from the northwest tomorrow with a chance for some light snow across the region.
Our Sponsors END_OF_DOCUMENT_TOKEN_TO_BE_REPLACED