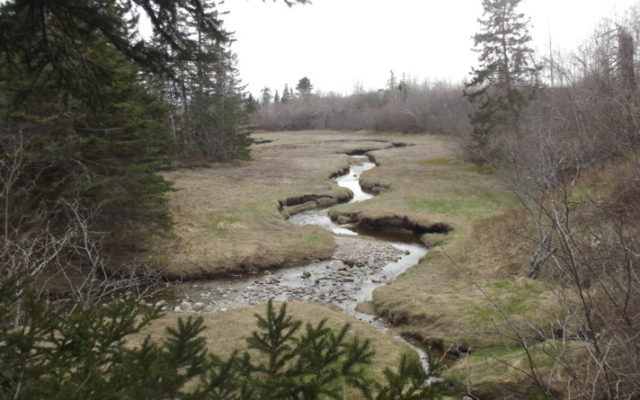 Why these conservationists are feeling optimistic about Atlantic salmon

Dwayne Shaw, the executive director of the Downeast Salmon Federation, and Andrew Goode, the vice president of U.S. programs for the Atlantic Salmon Federation in Brunswick, said the removal of a dam on Smelt Brookin Sullivan and a reduction of the ocean harvest of Atlantic salmon off Greenland were both positive measures that could pay dividends in the future.

The opening of Smelt Brook after 50 years has already allowed tomcod to spawn in the coastal stream, and conservationists expect smelt to follow suit in the spring. And the drastic reduction in the salmon harvest should leave many more fish available to attempt to return to their natal rivers, including rivers here in Maine.

“Certainly, ASF’s and NOAA’s marine tracking program over the past decade has documented the decline in the survival of salmon in their marine phase,” Goode wrote in an email. “We don’t yet understand all of the reasons but are pretty certain changing ocean temperatures are a big part of the reason.”

“There may not be much we can do about that in the short term at least but one of the few factors we can control is reducing the human kill of Atlantic salmon in the ocean at Greenland and opening up rivers like the Penobscot so the fish that are being saved have a place to come back to to spawn,” Goode wrote. “So given how few salmon we have in Maine, the impacts of the Greenland Agreement can only help and we need to make sure this agreement lasts and we don’t slide backwards and allow the harvest to increase in subsequent years if the numbers tick up as sometimes has happened in the past.”

Shaw is the head of the Downeast Salmon Federation, which helped lead the effort to remove the dam on Smelt Brook. And though the brook is small, it plays an important environmental role, he said.

“A small stream in Sullivan is a production unit for species such as smelt, tomcod, eel, brook trout and blueback herring and that small unit generates ecosystem and community benefits directly and indirectly,” Shaw wrote in an email. “Bringing that stream back online means more fish for salmon to eat, people and other animals to eat or enjoy.”

And Shaw was also keenly interested in the news out of Greenland.

“The negotiated reduction in the Greenland wild salmon quota has immediate and direct beneficial impacts on all North American wild salmon populations including Maine’s,” Shaw wrote. “Tagging studies have documented fish from Maine rivers in their nets. It is important to remember that these migratory fish are not ‘United States property’ when outside our waters. The Greenlanders also have a legitimate beef with us concerning the ways we have managed our rivers and migrating salmon in our waters over the years and to this day.”

Among the problems that have arisen in the U.S., according to Shaw: Overfishing, poorly built and mismanaged fishways, the absence of fishways, culvert barriers to fish migration and pollution.

“These issues are all in the U.S. waters and generally speaking, on the mend, but speed is the name of the game,” Shaw wrote. “We are in control of our future and can determine whether we want functioning river ecosystems and these ‘units of production’ to operate to our benefit or lie idle and neglected like Smelt Brook in Sullivan had for 50 years, like the Orange River in Whiting for the past 75 years, like the Union River for the past 110 years or the St. Croix for even more than that. The trick is to see that we can have our cake and eat it too.”

The upper-level low pressure area that has been parked over southern New England will continue to stall there today into the overnight period then begin to open up and shift southeast into the Atlantic Thursday.
Campaign Corner END_OF_DOCUMENT_TOKEN_TO_BE_REPLACED

Dale Crafts filed his nomination papers for Feb. 21 with the Secretary of State to officially be placed on the primary ballot on June 9, 2020, for the U.S. House of Representatives 2nd District race.
Our Sponsors END_OF_DOCUMENT_TOKEN_TO_BE_REPLACED