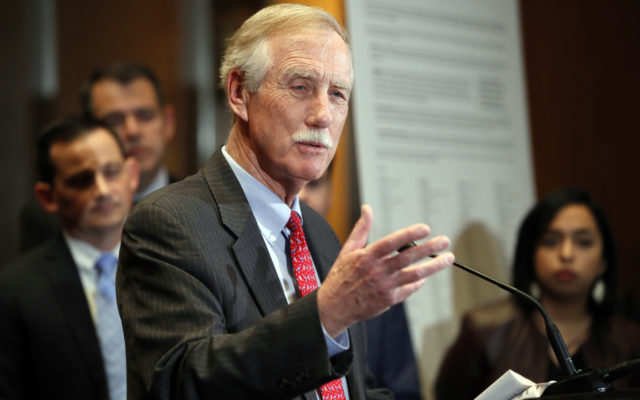 U.S. Sen. Angus King, (I-Maine) • January 19, 2019
As I write this, we are in the midst of week four of the government shutdown -- and while I’m hopeful that we may have reached a solution by the time you read this, the fact remains that every day of this shutdown has been completely irresponsible and unnecessary.

As I write this, we are in the midst of week four of the government shutdown — and while I’m hopeful that we may have reached a solution by the time you read this, the fact remains that every day of this shutdown has been completely irresponsible and unnecessary.

Before funding for the government expired, the Senate reached a bipartisan agreement to extend the funding deadline and allow for additional negotiations on the issue of border security — in fact, the Senate voted unanimously to keep the government open. But President Trump rejected this agreement, choosing to hold the paychecks of 800,000 federal workers hostage in exchange for an undefined border wall that is riddled with concerns regarding cost, location, effectiveness in protecting the border, environmental impact, and more.

But I want to focus on the hardworking people in Maine and across the country who are caught in the crossfire of a wholly unrelated policy debate.

In the weeks since this shutdown has started, approximately 1,200 federal workers in Maine have gone without pay. Some are furloughed, sitting at home without the opportunity to do their jobs, and others — like our U.S. Coast Guard personnel, Customs and Border Protection agents, and Transportation Security Administration employees — are being forced to come to work, but without pay. The same is true for government contractors, who may never see the wages they are losing as the shutdown drags on. (Though I’m working to fix that — more on that in a minute.)

But just because the paychecks have stopped doesn’t mean the bills stop, so now these public servants are trying to stretch their savings to keep food on the table, pay the mortgage, afford essential medications, and so much more. Maine people are responding as they always do: trying to help, with food pantries opening their doors to federal workers going without pay and neighbors helping their fellow community members bridge the gap. But this shouldn’t even be necessary — these hardworking men and women should be allowed to earn their living.

The federal workers who are losing income are struggling — but the economic impact is even more wide-ranging. Chances are, people in your community, or your church, or maybe even you yourself, have been impacted by this unnecessary shutdown.  Families and small businesses around our state are feeling the effects as key government agencies can no longer perform their duties.

It’s hard to comprehend — a debate about a wall on the Southern border shouldn’t slow down Maine’s economic growth. And though there appears to be no bipartisan solution on the horizon as of the time of this writing, there is some incremental progress happening. The most significant piece of news is that a bill to guarantee that federal workers will get their back pay once the shutdown is resolved was recently signed into law. This bill was introduced by my colleague, Senator Susan Collins, who deserves credit for her leadership to ensure we live up to our commitment to these public servants.

But, as I mentioned earlier, federal contractors face a unique challenge without any guarantee or expectation of back pay. The idea that a low-wage worker should miss a month of paychecks for no reason is absolutely terrible, which is why I have cosponsored a bill from Senator Tina Smith of Minnesota to make sure low-wage federal contractors — think janitors or food service workers — aren’t punished for a debate they have no control over.

I’ll keep fighting for them, and for our federal workers, and for the Maine people who rely on the services that are affected. The best way to help them is to reopen the government. We should do so immediately.

Maine is more than eight months into Medicaid expansion under the federal Affordable Care Act and trends around who is enrolling and where they live are starting to emerge, bucking some expectations and pointing out access challenges.
Apex Weather END_OF_DOCUMENT_TOKEN_TO_BE_REPLACED

Low pressure will track into the Atlantic from off the Southeast coast tonight into Thursday with increased cloudiness this evening into the overnight hours.
Campaign Corner END_OF_DOCUMENT_TOKEN_TO_BE_REPLACED

Democratic presidential candidate Mike Bloomberg’s campaign will host 25 events in Maine this Saturday and Sunday as part of a nationwide “Weekend of Action” to engage supporters and build on the momentum of the campaign.
Our Sponsors END_OF_DOCUMENT_TOKEN_TO_BE_REPLACED