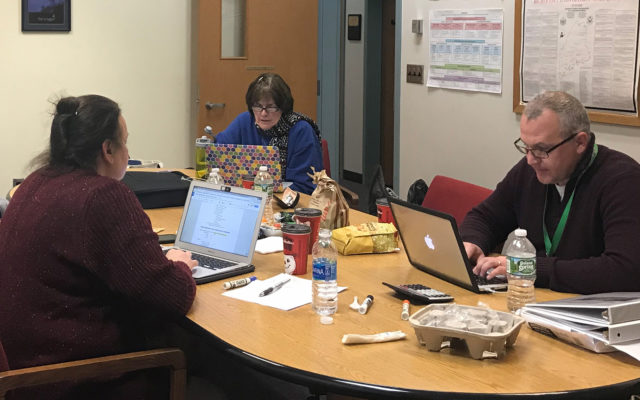 Sirois another step closer to becoming superintendent of Valley Unified

Sirois, who currently is superintendent of MSAD 27 in the Fort Kent area, will take over for the three school administrative units in the St. John Valley that have been working together for about three years to combine resources and save money in an effort to address declining enrollments and rising education costs.

Giselle Dionne, the current superintendent of the Madawaska School Department, said she supports the decision, adding that she has worked with Sirois in different capacities in the past, going back to when Sirois was a student of hers at Madawaska High School.

“He knows Madawaska and the Madawaska School Department,” Dionne said. “Although I will have a new role, working with all three school departments, Ben and I will continue working together. It is time to become more efficient in how we manage our schools, and time for the St. John Valley to decrease the number of superintendents. Ben will serve us all well.”

Officials with MSAD 33 in Frenchville and St. Agatha are still working to finalize the certification of Sirois as well, but current Superintendent Lisa Bernier said she “fully supports” the choice.

Following the Madawaska School Committee’s action, Sirois stated, “I feel honored that the Madawaska School Department, along with MSAD 27 and MSAD 33 are trusting the work that all three school district/departments are currently engaged in is for the improvement and sustainability of St. John Valley education.”

As part of their collaborative effort, the three school administrative units (SAUs) also developed a plan to build a new school to serve the region and replace their aging high schools. In August, the Maine State Board of Education notified the Valley Unified Board representing the three SAUs that it had selected the board’s proposal in a statewide competition to build a regional pilot consolidated school.

Following an initial site selection committee meeting in December, the SAUs are trying to find the optimal location while continuing the process of securing up to $100 million from the state to build the facility that would combine the existing high schools, integrate technical and career training, and include some post-secondary education aspects.

Sirois said that the work the three SAUs have done the last 2-3 years demonstrates they all have the same goal in mind.

“I look forward to serving the Valley Unified communities along with my colleagues Gisele Dionne and Lisa Berner among others,” he said. “We truly make a good team.”

According to Peter Caron, coordinator of innovative practice and community outreach for the VURSC, the milestone to appoint one single superintendent “aligns with Priority 4 of our regional strategic plan aimed at rightsizing education in the Upper St. John Valley.”

Priority 4 of the strategic plan indicates that the three SAUs will develop an organizational structure that allows for the immediate implementation of shared administration, services, personnel, and programs, according to Caron.

While no final decisions have been made regarding the administrative roles for Dionne and Bernier beginning July 1, Caron said “there will be plenty of work to do as we continue to move forward with efforts to share services and programs across the three school units.”

The salary of the VURSC superintendent/executive director for the new school year that begins July 1 remains under negotiation, but as part of Maine’s initiative to encourage regional service centers, Valley Unified will receive 55 percent direct state funding for the salary and benefits, according to Sirois.

“This means that the communities of MSAD 27, MSAD 33 and the Madawaska School Department will only share the remaining 45 percent of that salary and benefits,” he said.

“With more regions moving to a single superintendent to oversee multiple districts, the scope of the job is increasing,” Sirois said.

While salary negotiations for the next school year continue in all three SAUs, he said that it “is likely that close to the state average will be considered, as eight Valley Unified communities will be served with over 1,500 attending students, and approximately 300 employees will fall under the responsibility of that individual.”

Sirois added that Valley Unified received an additional $97,200 in direct state funding this school year for forming the regional service center, and “we have received notification that our direct state funding for VURSC next school year will be $150,900. This is money that we would not have received by remaining on our own. Add to that the $715,903 in FEDES grants, and $635,200 in EMBRACE grants we have secured over the past 18 months.”

“The time has come that we recognize that we are all part of the same Valley Unified community, and we have to work together,” he said.

The next meeting for the Valley Unified Site Selection Committee is scheduled to start at 6 p.m. Jan. 14 at the St. John Valley Technology Center in Frenchville, and the next meeting of the Valley Unified Regional Board of Directors is scheduled for 6 p.m. Jan. 15, at the Community High School Library in Fort Kent.
More information about the regionalization efforts is available online at: http://valleyunified.blogspot.com.

Only one member of Maine’s congressional delegation had come out in favor of impeaching President Donald Trump ahead of House Speaker Nancy Pelosi’s Tuesday announcement that the Democratic-led House of Representatives would begin an impeachment inquiry.
Apex Weather END_OF_DOCUMENT_TOKEN_TO_BE_REPLACED

Dale Crafts filed his nomination papers for Feb. 21 with the Secretary of State to officially be placed on the primary ballot on June 9, 2020, for the U.S. House of Representatives 2nd District race.
Our Sponsors END_OF_DOCUMENT_TOKEN_TO_BE_REPLACED