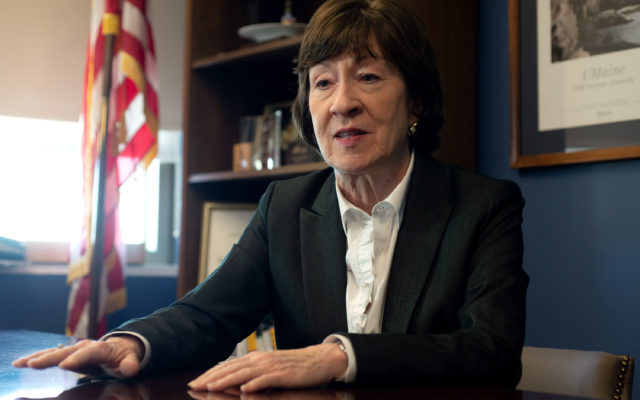 Jennifer Michaud II • January 4, 2019
The newly Democratic-controlled House passed a package of bills late Thursday that would reopen the federal government without paying for President Donald Trump’s border wall, drawing a swift veto threat from the White House and leaving the partial shutdown no closer to getting resolved.

The newly Democratic-controlled House passed a package of bills late Thursday that would reopen the federal government without paying for President Donald Trump’s border wall, drawing a swift veto threat from the White House and leaving the partial shutdown no closer to getting resolved.

But two Senate Republicans who are up for reelection in 2020 broke with Trump and party leaders on their shutdown strategy, saying it was time to end the impasse even if Democrats won’t give Trump the more than $5 billion in border funding he is demanding.

The comments from Sens. Cory Gardner of Colorado and Susan Collins of Maine — the only Senate Republicans running for reelection in states Trump lost — pointed to cracks within the GOP that could grow as the shutdown nears the two-week mark. Senate Majority Leader Mitch McConnell, R-Kentucky, reiterated Thursday that the Senate will only take up government spending legislation that Trump supports.

McConnell’s stance prompted angry attacks Thursday from new House Speaker Nancy Pelosi, D-California, and other Democrats, who insisted they were trying to give Republicans a way out of the standoff by passing two pieces of legislation: one a package of six spending bills that were negotiated on a bipartisan basis in the Senate and would reopen nearly all the federal agencies that have been shuttered since Dec. 22, and the second a stopgap spending bill through Feb. 8 covering only the Department of Homeland Security.

The six-bill package passed the House 241-190 Thursday night, and the short-term Homeland Security spending bill passed 239-192. A handful of Republicans broke ranks on each measure to vote “yes” with the Democrats.

The House strategy could allow Senate Republicans to pass legislation that would reopen most of the government while setting aside the debate over the border wall. But thus far, because of Trump’s opposition, party leaders have refused.

“What we’re asking the Republicans in the Senate to do is to take ‘yes’ for an answer. We are sending them back exactly, word for word, what they have passed,” Pelosi said. “Why would they not do that? Is it because the president won’t sign it? Did they not hear about the coequal branch of government, and that we the Congress send the president legislation and he can choose to sign or not?”

McConnell on Thursday restated the stance he has adopted since the Senate unanimously passed a short-term spending bill last month without additional wall funding – only to watch as Trump turned against it the very next morning amid a conservative backlash.

“I’ve made it clear on several occasions, and let me say it again: The Senate will not take up any proposal that does not have a real chance of passing this chamber and getting a presidential signature. Let’s not waste the time,” McConnell said. “Let’s not get off on the wrong foot, with House Democrats using their new platform to produce political statements rather than serious solutions.”

As the impasse dragged on, Senate Appropriations Committee Chairman Richard Shelby, R-Alabama, said for the first time that the stalemate could continue for “months and months.” A funding lapse of that length would have compounding consequences for the government’s ability to provide promised services, and for the approximately 800,000 federal workers who are either furloughed at home or working without any guarantee of getting paid.

Comments from the most politically vulnerable members of McConnell’s caucus suggested discomfort with the majority leader’s approach, and a desire for a quick resolution to the shutdown.

“I think we should pass a continuing resolution to get the government back open. The Senate has done it last Congress, we should do it again today,” Gardner said, as the 116th Congress got underway with pomp and ceremony on both sides of the Capitol.

Even if the legislation doesn’t have the border money Trump wants, Gardner said, “We can pass legislation that has the appropriations number in it while we continue to get more but we should continue to do our jobs and get the government open and let Democrats explain why they no longer support border security.”

Collins, a senior member of the Appropriations Committee, also indicated support for an element of the Democrats’ approach.

“I’m not saying their whole plan is a valid plan, but I see no reason why the bills that are ready to go and on which we’ve achieved an agreement should be held hostage to this debate over border security,” Collins said.

Nevertheless, Trump showed no sign Thursday that he was going to budge.

A veto threat issued by the White House against the House bills read: “The Administration is committed to working with the Congress to reopen lapsed agencies, but cannot accept legislation that provides unnecessary funding for wasteful programs while ignoring the Nation’s urgent border security needs.”

Trump himself made an appearance in the White House briefing room, where, flanked by members of the union for Border Patrol agents, he said he has “never had so much support as I have in the last week over my stance on border security . . . and for, frankly, the wall, or the barrier.”

“Without a wall you cannot have border security,” Trump continued. “It won’t work.”

Top congressional leaders plan to meet with Trump at the White House Friday, in a repeat of a meeting they had on Wednesday. But so far there are no signs of a breakthrough or any movement.

Vice President Mike Pence, in an interview Thursday on Fox News, reinforced the administration’s position. “I think the president has made it very clear: no wall, no deal,” Pence said.

The shutdown has lasted 13 days without any signs of compromise or earnest negotiations, with Democrats largely unifying and a number of Republicans flummoxed over Trump’s strategy.

Many of the federal workers impacted will miss their first paycheck beginning next week. Multiple national parks and museums have closed, and the impact is expected to become even more severe in the coming weeks. The food stamp program that millions of Americans rely on may grind to a halt beginning in February, and the Internal Revenue Service will not be able to process refunds.

Complicating matters for the White House, McConnell has distanced himself from the discussions since Trump turned on the spending bill passed by the Senate last month, which enraged some Republicans who had voted for the measure believing that they had Trump’s backing.

Shelby’s comments marked the first time a top political figure estimated the shutdown could drag into the spring, drawing alarm from federal workers and others.

“Hearing this from the chairman of the Senate Appropriations Committee is, quite candidly, a punch in the jaw of federal employees,” said Tony Reardon, president of the National Treasury Employees Union, which represents about 150,000 federal employees. “Their mental anguish and anxiety is bad enough. To hear this coming straight from congressional leaders does not instill a lot of hope.”

During the 2016 presidential campaign, Trump promised to erect a wall along the Mexico border and have Mexico pay for it. He said terrorists, drugs and criminals were coming to the United States through Mexico and needed to be stopped. This pledge proved very popular with many of his supporters.

Since taking over in 2017, Trump has continued to assert that a wall is needed but has backed away from insisting that Mexico pay for it. He has instead said the money should come from U.S. taxpayers, an idea that has divided Republicans. But many Republicans, some reluctantly, have agreed to follow his lead during the current shutdown.

Though some Senate Republicans broke with Trump and leadership Thursday, others cautioned about what would happen if he caved on his signature promise.

“If he gives in now, that’s the end of 2019 in terms of him being an effective president,” said Sen. Lindsey Graham, R-South Carolina, on Wednesday during an interview with Sean Hannity of Fox News. “That’s probably the end of his presidency. Donald Trump has made a promise to the American people: He’s going to secure our border.”

The shutdown is affecting about a quarter of the portion of the federal government funded by Congress, since the Pentagon and major agencies including the Department of Health and Human Services have already been funded through Sept. 30 by spending bills passed by Congress earlier in the year. Medicare, Medicaid and Social Security also are not affected.

The Washington Post’s Lisa Rein and Sean Sullivan contributed to this report.

A cold front will cross the region today associated with the upper trough and low which will absorb the remnants of Isaias in Canada.
Our Sponsors END_OF_DOCUMENT_TOKEN_TO_BE_REPLACED