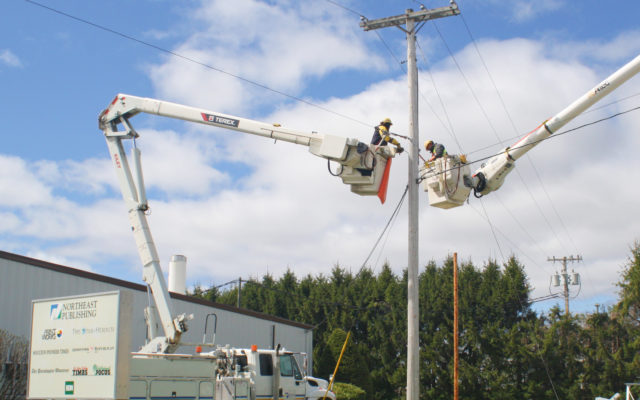 Lori Valigra • December 5, 2018
Emera Maine’s parent company plans to sell some of its businesses to pay for new projects, but so far, executives have shed little light on the future of the Maine utility, which has had lower earnings than expected so far this year.

Emera Maine’s parent company plans to sell some of its businesses to pay for new projects, but so far, executives have shed little light on the future of the Maine utility, which has had lower earnings than expected so far this year.

Emera Inc. executives told financial analysts on Nov. 9 that it is too expensive to get equity financing for new projects, so the company planned to cut costs internally and sell off some business assets to pay for them.

“We’re looking more aggressively at internal sources of capital as an important component of our funding plan,” said Scott Carlyle Balfour, CEO, president and director of Emera Inc. “This means that in addition to our operating cash flow, select asset sales will form a meaningful part of our funding plan.” His comments to analysts were included in a transcript submitted to the U.S. Securities and Exchange Commission.

Within three weeks of the call with analysts, Emera Inc. on Nov. 26 announced it would sell its three natural gas-fired generation plants in New England, including Rumford Power, to an affiliate of The Carlyle Group, an asset management company. The transaction is subject to regulatory approvals and is expected to close in the first quarter of 2019.

Emera said proceeds from the sale would be used to reduce its corporate debt and support capital investment opportunities in its regulated utility businesses.

Balfour did not tell the financial analysts whether Emera Maine, one of eight affiliates in Canada and the United States, would be considered for sale.

He did say that the effects of regulatory decisions that lowered electricity rates and late-season winter storms decreased earnings in the first three quarters of 2018.

An Emera Maine spokesperson said the parent company has not provided any details about additional businesses that might or might not be sold.

“As a publicly traded company, our parent company, Emera Inc., has shared information about growth and funding plans with investors, and has committed to provide more information on those plans when the time is right,” Emera Maine spokeswoman Judy Long said.

Gregory W. Blunden, Emera’s CFO, told the analysts that despite the lower earnings in the first three quarters of this year, he is hopeful Emera Maine will end the year with flat or slightly higher earnings than those in 2017.

Emera Maine raised transmission and delivery rates July 1, but did not get the full amount of the rate increase it had originally requested.

In June 2018, the Maine Public Utilities Commission, which along with the Federal Energy Regulatory Commission, regulated Emera Maine, approved a 5.3 percent distribution rate increase. Emera Maine had asked for 12 percent. The distribution part of the bill is the cost to deliver electricity to consumers.

FERC oversees transmission rates. There are four pending complaints filed with FERC that challenge the base return on investment for setting Emera Maine’s rates.

Emera Maine expects to invest about $75 million in 2018, primarily on transmission and distribution capital projects, according to a filing with the U.S. Securities and Exchange Commission. That’s higher than the $61 million in 2017.

However, Emera’s planned investment and growth is far higher at its Atlantic Canada and Florida affiliates. Balfour said they will be the major focus areas for the company’s growth.

“Over the next three years, investments like our Florida solar program, the modernization of Big Bend [Tampa Electric power station] and our cross-utility [advanced metering infrastructure] roll-out are the foundation of a more than $6 billion capital program, which is focused on investments in renewable and clean energy, modernization of aging infrastructure and customer-focused technologies,” Balfour said.

“Over this period, approximately 85 percent of our planned capital will be deployed in Florida and Nova Scotia,” he said, adding that Florida will give Emera the highest growth in earnings per share and reduce its debt.

A warm front will approach the Valley today and cross the region this evening.
Campaign Corner END_OF_DOCUMENT_TOKEN_TO_BE_REPLACED

Dale Crafts filed his nomination papers for Feb. 21 with the Secretary of State to officially be placed on the primary ballot on June 9, 2020, for the U.S. House of Representatives 2nd District race.
Our Sponsors END_OF_DOCUMENT_TOKEN_TO_BE_REPLACED