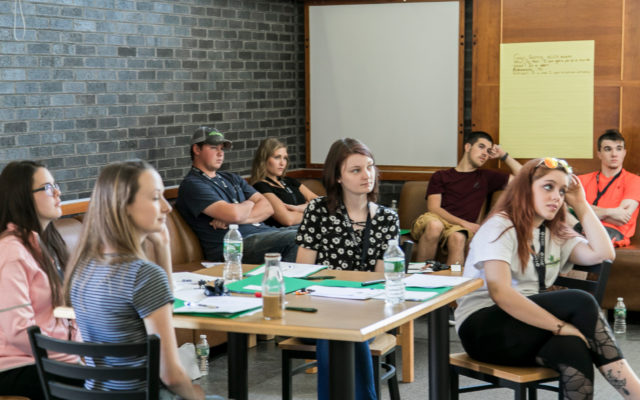 Melissa Lizotte • September 16, 2018
Officials with the nonprofit Aroostook Aspirations Initiative celebrated the success of all participating students as well as local business and community leaders on Thursday night while also taking time to reflect on how they would like to strengthen their strong Aroostook County friendships in years to come.

PRESQUE ISLE, Maine — Officials with the nonprofit Aroostook Aspirations Initiative celebrated the success of all participating students as well as local business and community leaders on Thursday night while also taking time to reflect on how they would like to strengthen their strong Aroostook County friendships in years to come.

AAI held its fifth annual Night With the Stars gala at the University of Maine at Presque Isle, which became the organization’s new office location in January 2018. The awards ceremony originated in 2014, the same year that the Gauvin County Scholarship Fund awarded its first $1,000 scholarships to 16 students — otherwise known as “Gauvin Scholars” — one from each of the 16 County high schools.

“We wanted to provide a place to celebrate all our scholars and give them the opportunity to network with business leaders,” AAI president and co-founder Sandy Gauvin said Thursday. “The gala also serves as a fundraiser so that we could continue to provide scholarships.”

Sandy and Ray Gauvin first launched AAI in 2013 to provide funding to first-generation college students who wish to earn associate or bachelor’s degrees at UMPI, the University of Maine at Fort Kent, Northern Maine Community College or the Presque Isle branch of Husson University, and to then pursue lifelong careers in Aroostook County.

This year, AAI decided not to award scholarships in order to take time to determine how to further expand programming, according to Sandy Gauvin. In 2017, the organization awarded 23 scholarships. Ten of those scholars at the time had plans to attend Northern Maine Community College while nine chose UMPI and four picked UMFK.

Sandy Gauvin noted that all 16 of the original Gauvin Scholars have since graduated from college with two-year and four-year degrees and have found work in their respective fields in Aroostook County. AAI plans to reinstate the scholarship program next year. Although there are no current plans for new programs, she said that the organization would like to expand upon the opportunities that it provides to students as part of its annual Scholar Weekend as well as offering internships and career-building workshops.

The move to UMPI, Sandy Gauvin said, happened partly because Ray Gauvin had owned and later sold the Main Street building that housed AAI’s office, but mostly because UMPI offered them a space in Normal Hall, a building that previously housed faculty offices. Being on campus has allowed Gauvin Scholars who attend UMPI easier access to AAI officials, who often serve as mentors to all scholarship recipients throughout their college careers.

“It was important that we take the time to figure out where we might go in the future,” Sandy Gauvin said. “Our goal remains to give students opportunities for a quality education in Aroostook County that allows them to stay here. They are our best hope for the future.”

Mariah Hebert, a 2014 Gauvin Scholar and Madawaska native, praised the organization during a presentation at Thursday evening’s gala at UMPI’s Campus Center. Hebert graduated this past May with a bachelor’s degree in nursing from the University of Maine at Fort Kent and now works as a labor and delivery nurse at Cary Medical Center in Caribou.

“AAI not only gives students scholarships, but also mentorship, networking and internship opportunities and a network of support for all of us while we attend college,” Hebert said. “The Gauvins have been essential in giving kids like me the opportunity to live and work in the place that we call home.”

AAI named two recipients for the Business of the Year award: Machias Savings Bank and Lois Dickson, president and owner of Tempo Employment Services in Presque Isle. Chris Condon, president and CEO of United Insurance, was given the Road Back Home award, which is presented to individuals who have made a difference in the lives of Aroostook County residents, in particular those who came “home” after initially beginning their careers elsewhere.

Canadian high pressure building down from the northwest sends us some more frigid air for the late week period.
Crown Politics END_OF_DOCUMENT_TOKEN_TO_BE_REPLACED

Three candidates are vying for two seats on the Fort Kent Town Council. Voters will decide which of the three -- Corey Pelletier, Brandon Dayton or Andrew Caron -- will get a seat during the town’s annual election on Monday, March 22.
Our Sponsors END_OF_DOCUMENT_TOKEN_TO_BE_REPLACED