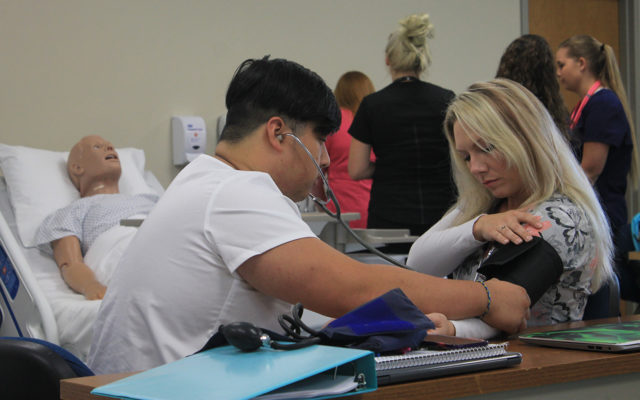 Anthony Brino • September 12, 2018
Alysha Decker of Mars Hill has long wanted to work as a nurse and was the rare high school student who became a certified nursing assistant at the age of 16.

PRESQUE ISLE, Maine — Alysha Decker of Mars Hill has long wanted to work as a nurse and was the rare high school student who became a certified nursing assistant at the age of 16.

“My dad is a disabled veteran and I’ve been taking care of him since I’ve been walking,” Decker said. “My mom was a CNA for 26 years and then became a nurse, and she’s my role model.”

UMFK’s nursing program “is bursting at the seams,” with more than 600 nursing students who make up more than half of the school’s total enrollment, Sleeper said.

The new collaboration will allow students from southern and central Aroostook County to live locally while earning a four-year bachelor’s degree in nursing at UMPI and taking advantage of training opportunities at healthcare providers like The Aroostook Medical Center.

“We have healthcare needs across Aroostook County,” Sleeper said. “One of the things we wanted to do is enhance access for folks who perhaps are place-bound, for whom travel to Fort Kent is difficult.”

The program also is aimed at helping students train at clinics and hospitals in central and southern Aroostook County, Sleeper said.

“It helps them create pathways for nurses to stay and work here. The nursing need is significant. We hope it creates opportunities for students to think about: ‘I really enjoy Aroostook County and I really like the mission and vision of this institution.’”

At the same time that Maine’s population is aging, there also is a nursing shortage facing the state’s healthcare providers and hospitals, with some facilities hiring travel nurses who come from other states and work on short-term contracts.

According to an analysis of statewide data gathered for a summit hosted by the University of Maine System and the Maine Department of Health and Human Services last year, the state will have a shortage of 3,200 registered nurses by 2025 as many nurses retire along with the rest of the baby boomer workforce. The analysis estimates that the state will need to increase the number of new nurses by 20 percent each year to replace those who are retiring.

The nursing program at the UMFK and UMPI campuses also would be among the beneficiaries of a $49 million bond package that Maine voters will be asked to approve this November. Question 4, the University of Maine System Workforce Development Infrastructure Investment Bond, would direct $49 million in funding for new and existing University of Maine facilities, with $7 million going to the UMFK and UMPI campuses.

Along with other projects, some of the funding would go to the nursing laboratory space at UMFK and help build a permanent nursing lab space at UMPI, said Barbara Blackstone, UMPI’s dean of professional programs.

“The temporary lab now is sufficient,” but it is somewhat crowded and is doubling as a classroom and lab, Blackstone said.

A new lab would include four hospital suites with medical monitoring equipment, as well as state of the art mannequin patients, Blackstone said.

High pressure to the east and and trough to the west will place the region in an area of southerly flow today, which will draw increasingly moist air into the region.
Our Sponsors END_OF_DOCUMENT_TOKEN_TO_BE_REPLACED