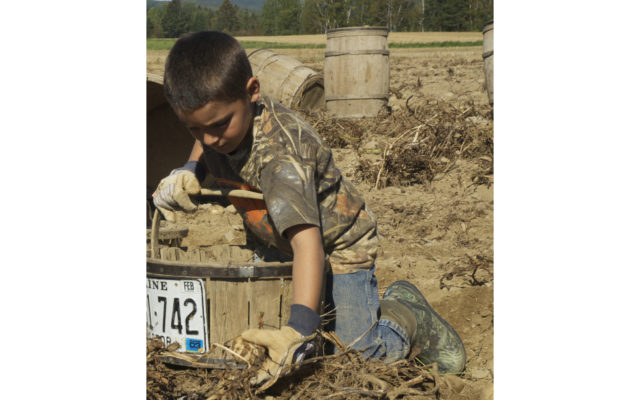 In remembrance of potato harvests past

Another day like yesterday. Wake up before dawn. Eat breakfast in the dark, in the silence of the dark before dawn. Put on clothes with dried mud on the knees and mud-hardened gloves with holes at the tips. Thank your mother for the paper-bag lunch she’s prepared for you. Ride on a bus in the dark, while everyone tries to get another half hour of sleep as the driver plays a rackety radio to keep awake.

Then, you’re out of the bus and into a cold morning before sunrise, with frost all over the ground. You take shelter in an old barn until the ground unfreezes and the wind stops blowing. A half hour later, you greet the farmer or his wife who brings in your tickets from the previous day, only to be disappointed that they’ve drawn you short by three barrels. Live with it, because nobody believes you and nobody cares. Choose a basket for the day’s work from the pile, all of them pretty worn and dirty.

When you hear the digger out in the field, you follow the others out of the barn, clutching the paper bag that has your sandwiches and a soda. One of the farmer’s paid workers comes over the rise with a bunch of twigs and starts sectioning off the field for as many pickers as there are. Some argue for less or for more and, during the course of the day, sections will be mysteriously realigned by people who want less or who want more.

The flatbed truck comes by, dumping empty barrels all across the last rows that were dug up yesterday. You put one up and, perhaps, toss in a potato or two for good luck. And then, sitting on the handle of the basket, you wait for the digger to come over the rise and expose the potatoes in your section of the field. It’s not long. You’re soon hard at work.

All day, you follow on your knees behind the digger’s last dug rows, and you fill barrel after barrel. Seemingly addicted to the next number that follows the last number of the barrel you just filled, you tumble another basketful of potatoes into another worn barrel that is soon filled. And, taking off your muddy gloves, you proudly insert your red ticket number into the barrel cleft.

Lunch finally comes, and there’s no way to wash beforehand. You unwrap the sandwich only so much so that you won’t have to touch it, and you take your first big bite, which is all that you’ve been thinking about for the last half hour. And, having let yourself build a thirst, you pop the cap on your soda bottle and take a big gulp, all the while feeling rich in being able to drink as much as you like.

As soon as it’s begun, it’s gone. The digger is coming over the rise, and it’s time to catch up with those two rows of previously dug up potatoes that you just weren’t able to pick that morning. Almost discouraged, you drop your basket on the oldest row dug, and you begin to pick, just as the digger goes by, opening up another row,

Flatbeds come and the farmer’s sons and nephews, using a grapple that fairly looks like a bear trap, pick up full barrels of potatoes and roll them to the back, tenuously held there by a rope cordon. You do this all day long, avoiding thinking as much as you can, until the sun begins to set. When the farmer calls it a day, it’s because he’s aware that accidents in the dark are going to cost him one way or another. Even though he hates to stop, he puts a stop to the digging, and everyone finishes picking what has already been dug.

With the sun setting, you board the bus, sharing a lumpen seat with someone you don’t know. In silence, you count your tickets to see if your mental count jibes with the tickets you have left. And, satisfied with your tally, you reach into your paper bag for a candy bar that you saved for your trip back home. It’s at this time that you start to realize how sore you are … and how dirty. You ride in silence until the bus drops you off at your house.

You’re victorious. You feel like a battle-hardened soldier trucked in for hot food and rest from the latest skirmish with the enemy. And you are greeted that way, with your Mom praising you for how many barrels you picked. After sending you to wash up and put on your pajamas, she ladles your plate with lots and lots to eat of your favorite foods. And then, despite house rules, your Mom and Dad let you lie down on the floor and watch an hour or two of television.

You’re at peace. You’re finally safe at home and you’re clean and you’re well fed. And you don’t remember falling asleep during “McHale’s Navy,” but you wake up in your bed at 5 a.m., knowing that another day has begun. And those potatoes aren’t going to pick themselves.

A cold front will cross the region today associated with the upper trough and low which will absorb the remnants of Isaias in Canada.
Our Sponsors END_OF_DOCUMENT_TOKEN_TO_BE_REPLACED