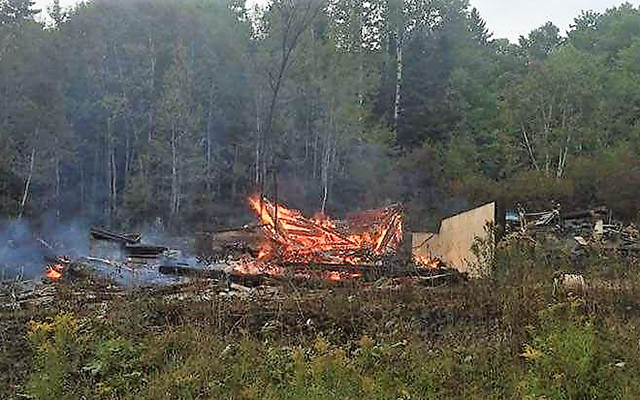 Jessica Potila, SJVT / FhF Staff Writer • August 25, 2018
A 62-year-old Allagash man saw the home he built with his own hands destroyed by fire on Tuesday. Carter McBreairty lived in the home with his adult son, Jarod McBreairty, and girlfriend, Kim Hafford.

ALLAGASH, Maine — A 62-year-old Allagash man saw the home he built with his own hands destroyed by fire on Tuesday. Carter McBreairty lived in the home with his adult son, Jarod McBreairty, and girlfriend, Kim Hafford.

None of the family members were at home when the fire broke out that afternoon.

“It was good that none of us were there. If it would have happened at night it maybe would have been a lot worse,” said Hafford, who was working a shift at the Ameridial Call Center when the fire occurred.

Allagash Assistant Fire Chief Louis Pelletier said firefighters couldn’t do much for the home, but they were able to mitigate the damage by preventing the fire from spreading to a nearby home or the Allagash woods.

“The call came in about 2:30 p.m.,” Pelletier said. “By the time we arrived the home was engulfed. The roof had already collapsed, so there wasn’t much we could do.”

Pelletier said weather conditions were in their favor that day as the firefighters contained the fire to the McBreairty home.

“We were fortunate that it wasn’t windy,” he said.

Firefighters from St. Francis and Fort Kent assisted in battling the blaze. Pelletier said the cause of the fire is unknown at this time. He added that nobody was injured as a result of the fire.

“There was no loss of life at all, which is always good,” he said. “Everything else can be rebuilt.”

Margaret McBreairty, Carter’s sister, is helping the family to do just that. She began a Go Fund Me page to support her brother, which raised nearly $6,000 in the first two days. Margaret McBreairty said that is a testament to the respect people have for Carter McBreairty’s kind heart and strong work ethic.

The three lost all of their belongings to the fire, including medications the two take for serious medical conditions. They were able to have their prescriptions refilled the next day and also purchased new clothing.

Carter McBreairty works as a mechanic for a construction company out of southern Maine and travels weekly downstate for work. He happened to be in Allagash taking vacation days when the fire happened.

He stays with elderly relatives overnight and ensures their safety during ice jams, Margaret McBreairty said..

Carter McBreairty often helps others, including strangers, his sister added. He has been known to change a few tires for strangers in need, including a visiting judge who found himself stranded by a flat tire in the Allagash woods, Margaret McBreairty said.

(Disclaimer: Carter McBreairty stopped and changed this reporter’s flat tire in Allagash, which went flat while covering another story several years ago. He even offered a can of beer.)

The family is currently staying at a relative’s home and hopes to rebuild on the Carter McBreairty property.

Hafford said she would like to express her appreciation to members of the community for their support.

“They’re wonderful, wonderful. Sometimes you take for granted that people are so good, you know, but no, we couldn’t ask them to be better.”

As the Maine Turnpike expects 1 million travelers alone over the Labor Day weekend, policymakers are gearing up for a sprint to solve one of the state’s most intractable problems: a long-standing — and growing — transportation funding gap.
Apex Weather END_OF_DOCUMENT_TOKEN_TO_BE_REPLACED

The Valley will receive an inch or less of accumulation from Thursday's system based on current forecast model data.
Our Sponsors END_OF_DOCUMENT_TOKEN_TO_BE_REPLACED