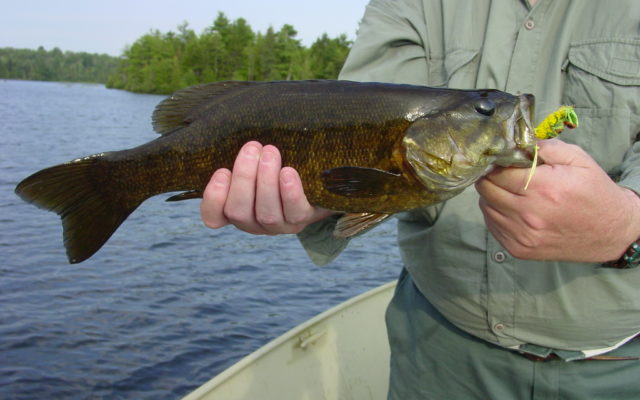 Bill Graves, Special to the Fiddlehead Focus • August 13, 2018
If I wanted to endure day after day, week after week of humid, hot, sweltering weather, I’d live in Africa, or perhaps Florida.

If I wanted to endure day after day, week after week of humid, hot, sweltering weather, I’d live in Africa, or perhaps Florida. This steamy, drought plagued summer is truly atypical for Northern Maine. At least I hope this isn’t going to become an annual tribulation.

Although complaining seldom affects natural phenomenon like Mother Nature, I’d like to point out it’s not just personal discomfort. The heat is really screwing up my summer fly fishing! 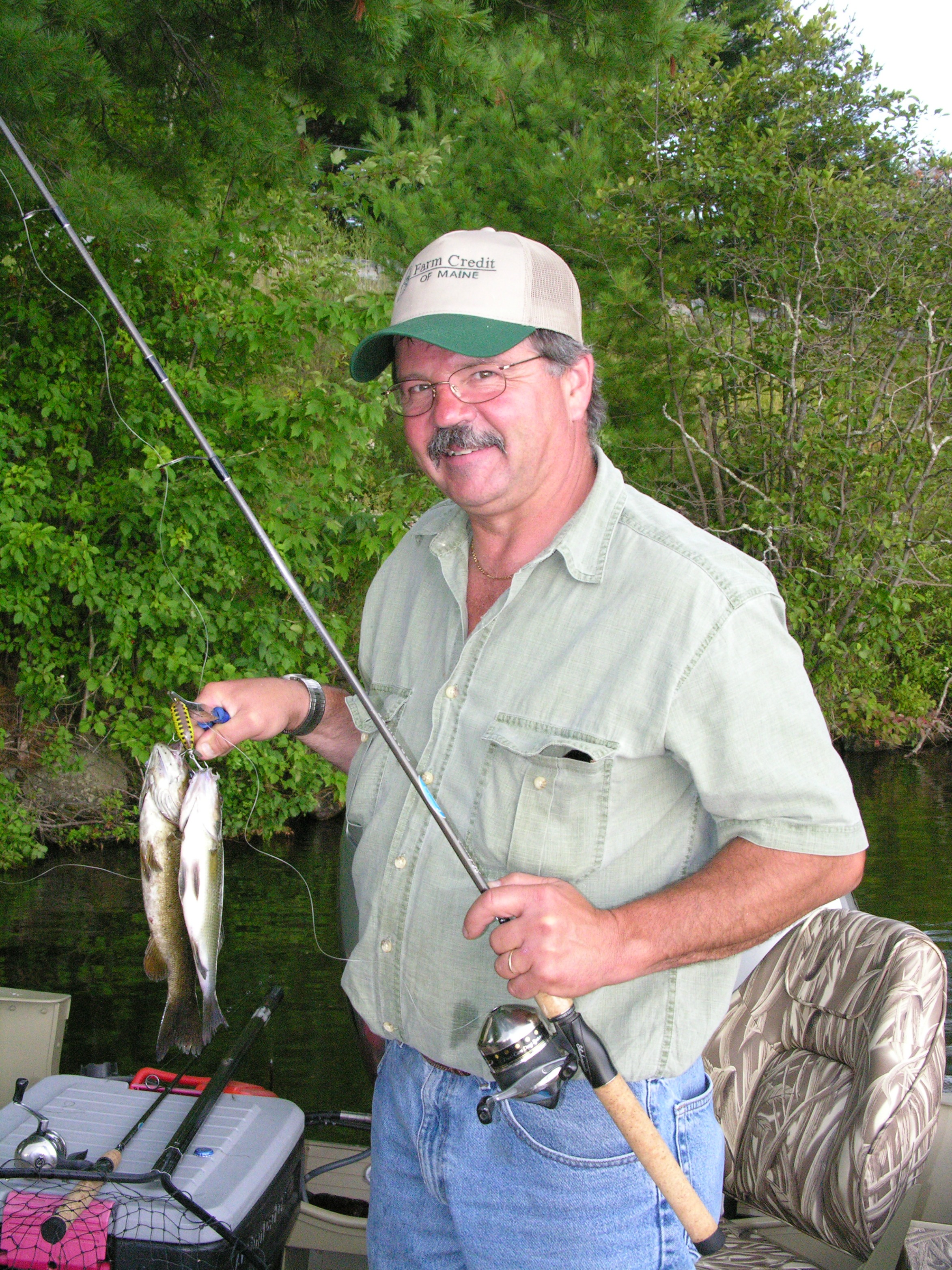 Sometimes hot weather bass casting in August can get so good that fish will fight over a topwater plug and an angler can land two at a time, as Trent Lundeen of Mars Hill can attest. (Courtesy of Bill Graves)

If I’m going to bite the bullet and venture out in this tropical heat, there needs to be a jerk on both ends of the line. To that end, I hooked up the boat and headed south to Medway, the Penobscot River and its plentiful population of acrobatic, aerobatic smallmouth bass. With the hydro dam just a mile or so downriver, water levels are kept high and fish remain active throughout the day. I prefer late afternoon and evening fishing so the smallies become more receptive to topwater plugs as the sun goes down.

While it’s possible to cast from either river bank in a multitude of road side locations and hook bronzebacks, a boat or canoe offers far better access. There’s a dock and cement ramp in a well maintained park just a mile from Interstate 95 and plenty of parking area.

If you own a light or medium weight, 6-7-foot spinning rod and reel or bait casting combo filled with 6- or 8-pound test monofilament, you’re set to fish bass.

There are lots of bait choices, but I used size 7 floating Rapalas on my premier outing years ago with great luck. These were the same lures I trolled for spring trout and salmon. The next year, a fishing buddy introduced me to a single gold leaf Colorado spinner with a 3-1/2 inch plastic grub and the action was tremendous. This outfit still offers steady action, but now I lean toward colorful 4-or 5-nch plastic worms, topwater plugs, or even deer hair or plastic poppers cast with a fly rod for some real excitement.

If there’s some current to the stream flow, it’s best to use a deep diving crank bait to reach the bass along bottom. A crayfish imitation works well. A skirted spinner bait or single Colorado leaf spinner and grub combo are great options for clear bright days. My favorite bottom hugger is a snag-free Texas Rigged 5-inch Senko worm with a cone-shaped sinker pinned in place at the head of the bait. Just look up Texas Rig on the internet for set up videos and directions. It’s simple to rig and deadly on sunny day bronzebacks.

Another sure-fire worm set up is called a Wacky Rig. Upon initial observation it looks unorthodox at best, even ridiculous. Whoever saw a worm swim through the water with its mid-section first and its head and tail dragging in a V-shape? Bass go crazy for this appropriately named wacky set-up. It’s possible to just insert the hook through the center of a 4-6-inch plastic worm, then cast and slowly retrieve with a stop and go motion.

To make the Wacky Rig weedless and to assure a single worm lasts through several hook-ups, spend $5 on a wacky tool and rings. Your plastic worm slides inside of the hollow tool and a small rubber ring slides over the tool, off the end and tightly encircles the center of the worm. Slide a hook with a weed guard under the ring, then cast and retrieve using an irregular stop and go action. Bass will often grab the worm as it sinks and flutters during the brief hesitations. 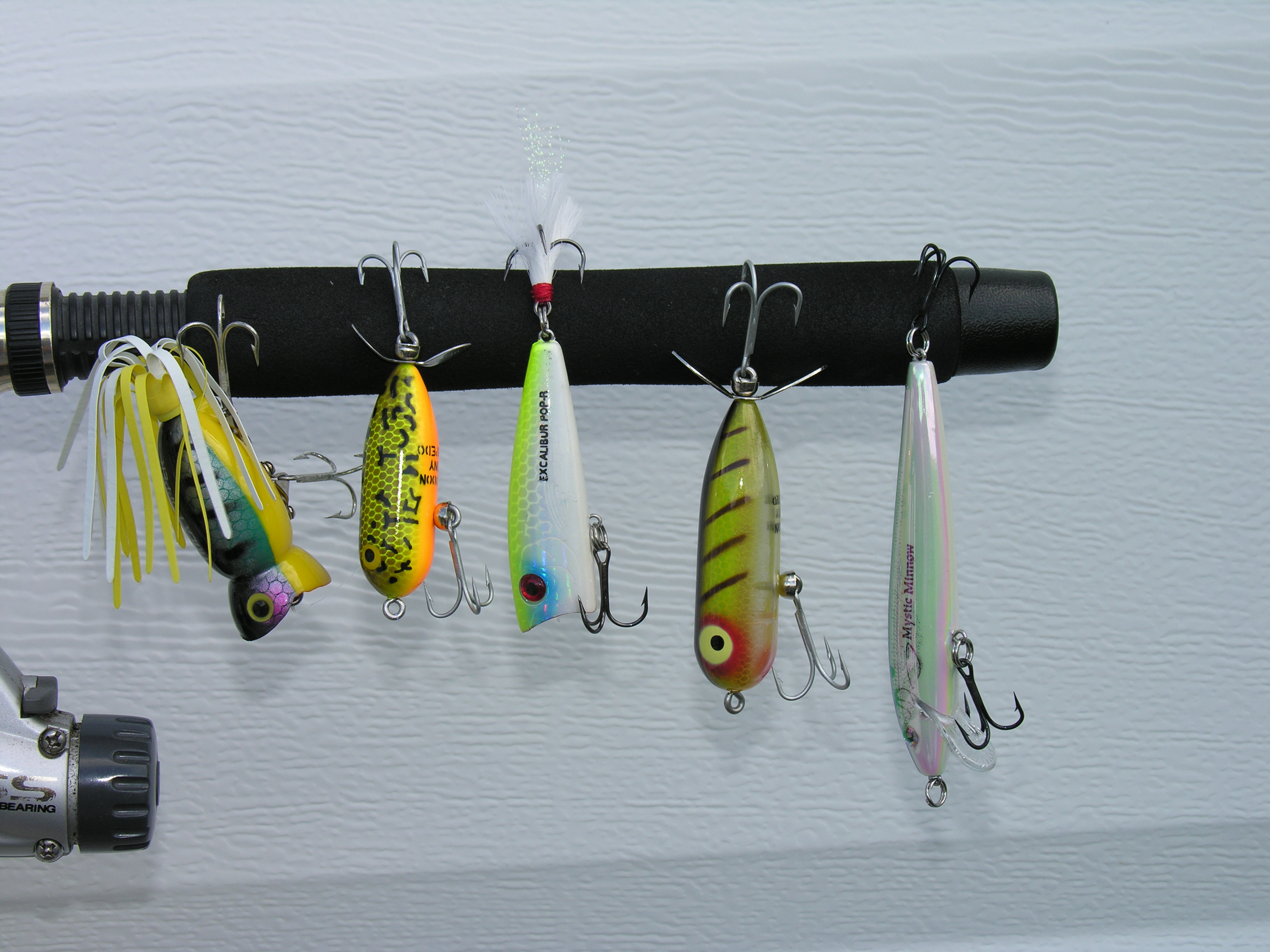 Noisy, topwater plugs that create a disturbance on the surface really get bass excited and induce terrific, explosive strikes. (Courtesy of Bill Graves)

As soon as the sun drops below the tree line, I head for coves, inlets or shorelines dotted with stumps, weed beds or exposed rocks and cast topwater plugs. Any surface lure that makes lots of noise and splashes the water should draw breathtaking topwater strikes. There are plugs that pop, gurgle, splash and swish while being reeled back to the boat and it drives bass into a frenzy. Cast the lure and let it sit in place for a few seconds. Sometimes a smallmouth will attack immediately. If not, reel a bit and stop again, then repeat this action all the way back to boatside.

Rebel POP-Rs, Heddon Torpedo’s, Rapala’s Skitter POP and Arbogast’s Jitterbug and Hula Popper are all sure bets for surface action. For fly fishing fanatics, it’s difficult to find a more challenging endeavor than casting a trimmed deer hair bug to strike, play and land a somersaulting 3-pound bronzeback on the single hook fly.

My cousin, Mike Wallace of Freeport, and fishing buddy Tom Wolters of Madawaska Lake accompanied me on the trip to the Penobscot River last week. We launched the boat at 3 p.m. and made our final casts at 8 p.m. During that 5 hour window, we caught and released 44 bass. Without exaggeration, we hooked and lost 30 more smallies before we could fight them to the boat. Now that’s an action packed adventure!

With current weather and water conditions on most rivers and streams, bass casting offers a reliable substitute for trout and salmon fishing. Excellent results can be enjoyed throughout August and September. Rookies and young anglers will all catch fish.

Dew points will drop back into the 50s by tonight creating less muggy conditions in the Valley.
Our Sponsors END_OF_DOCUMENT_TOKEN_TO_BE_REPLACED