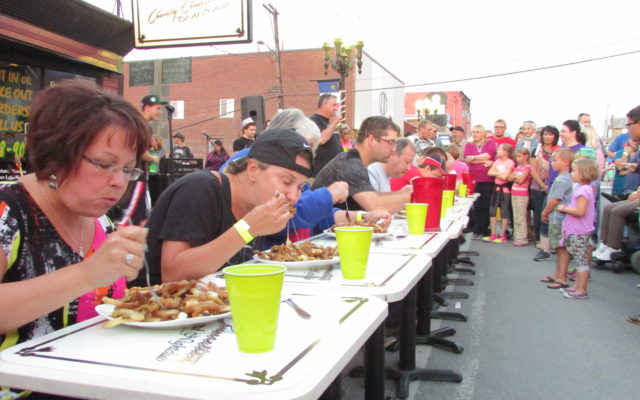 Morgan Mitchell • July 27, 2018
The St. John Valley Chamber of Commerce will host in August the 3rd annual Poutine Palooza, which centers on one of the most notable, and delicious, icons of Acadian culture.

MADAWASKA, Maine — The St. John Valley Chamber of Commerce will host in August the 3rd annual Poutine Palooza, which centers on one of the most notable, and delicious, icons of Acadian culture.

The event — an homage to the traditional Quebecois delicacy of french-fried potatoes covered in gravy and cheese curds — coincides with the beginning of the Acadian Festival during the  Party du Main Street on Aug. 10.

“The Poutine Palooza is separate from, but designed to boost numbers for the Acadian Festival,” according to chamber director, Brian Bouley, who added that “this year, the prizes are bigger.”

Leading up to palooza day and the signature poutine eating contest, a panel of judges will make the rounds in the area on Aug. 3 in search of the best poutine made by a restaurant.

The chamber also will be partnering with area restaurants to offer poutine specials from Aug. 1-15. A list of participating restaurants is expected to be posted soon on the chamber website.

Then, on Aug. 10, members of the public will have their shot at cash prizes, including $200 for the winner, in the poutine eating contest, which is sponsored by Big Rick’s Burgers and Wings. After the contest, organizers will announce the winners of the Best Restaurant Poutine Contest, awarding a trophy and bragging rights.

Throughout the entire day, the Maine-ly Meat ‘n Potatoes food truck will be selling about half a dozen different kinds of poutine and their famous chocolate-covered, frozen bananas topped with various garnishings, called Delsie Dips, made by Grand Isle’s own Delsie Corbin for her college fund.

The food truck will be located on Main Street in front of Daigle Oil at the end of Legion Street on Aug. 10 from 4:30 p.m. until they run out.

The poutine eating contest has been sponsored by Big Rick’s Burgers and Wings since the beginning, with owner Ricky Nadeau donating his location, staff, and poutines.

“I continue to host and sponsor the contest because it’s a great addition to the Acadian Festival and hundreds of people of all ages and from all walks of life come out to watch and enjoy it,” said Nadeau.

The contestant who eats the most poutine by weight in half an hour, or until no one can eat any more, wins.

Anyone can sign up for the poutine eating contest online, at Big Rick’s Burgers and Wings, or at the St. John Valley Chamber of Commerce. There is a $20 entrance fee. Check-in for the eating contest begins at 7:30 p.m. at Big Ricks on Aug 10.

As the Maine Turnpike expects 1 million travelers alone over the Labor Day weekend, policymakers are gearing up for a sprint to solve one of the state’s most intractable problems: a long-standing — and growing — transportation funding gap.
Apex Weather END_OF_DOCUMENT_TOKEN_TO_BE_REPLACED

A strong Arctic cold front will push into the region from the northwest tomorrow with a chance for some light snow across the region.
Our Sponsors END_OF_DOCUMENT_TOKEN_TO_BE_REPLACED