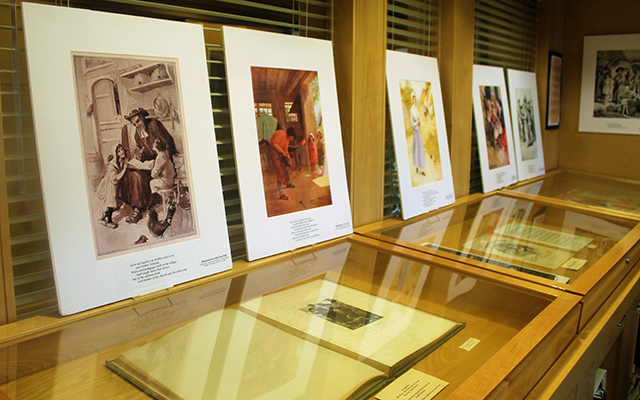 Jessica Potila, SJVT / FhF Staff Writer • July 12, 2018
The Acadian Archives/Archives acadiennes of the University of Maine at Fort Kent opened its new exhibit, “Evangeline,” with a wine and cheese reception on July 5.

FORT KENT, Maine —  The Acadian Archives/Archives acadiennes of the University of Maine at Fort Kent opened its new exhibit, “Evangeline,” with a wine and cheese reception on July 5. 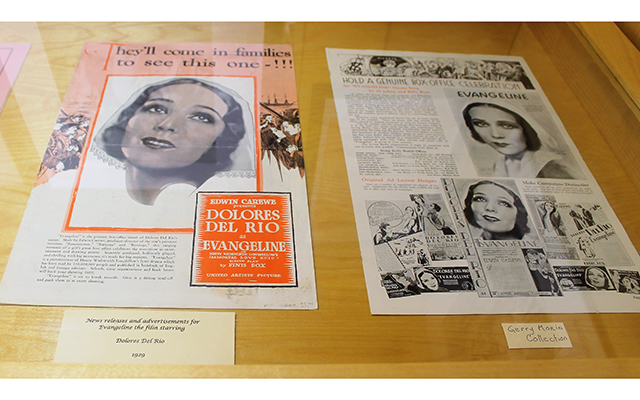 Movie posters from the 1913 film “Evangeline” are among many items related to Longfellow’s famous poem of the same name which are on display at the Acadian Archives/Archives acadiennes through December. (Jessica Potila)

The free exhibit focuses on the famous fictional 1847 poem “Evangeline, A Tale of Acadia,” which the American poet Henry Wadsworth Longfellow wrote.

“The poem is about a young Acadian woman named Evangeline who becomes separated from her fiancé, Gabriel, during the Grand Dérangement or Expulsion of the Acadians from their homeland, Nova Scotia,” according to a press release.

“The poem “Evangeline” is very important to Acadians, because it was the first time that a source outside of Acadia made reference to the ethnic cleansing that Acadians had gone through,” she said. “It was published at a time when Acadians had come back to Acadia. They’d come back from having escaped the deportations or were coming back from exile and they were just getting re-established. Of course they had nothing, so survival was foremost in their thoughts, and there really wasn’t any mention of Acadia or Acadians. It was as if that history had never happened. So “Evangeline” was a catalyst for what happened after that and that is there was an Acadian renaissance and Acadians started having national conventions, and those national conventions were all about establishing themselves economically, agriculturally, socially, culturally and politically.”

Pelletier said the poem is still relevant to the classes she teaches today.

“I always tell my students that there was no Evangeline and of course the person depicted in the poem is not a true representation of Acadian people, but then I always say there were thousands of Evangelines because what she went through in losing her fiance during ethnic cleansing, that happened to thousands of women,” Pelletier said.

The exhibit includes items owned by the archives and items loaned to the university by local Acadians Francoise Paradis, Gerry Morin, and Fr. Jacques LaPointe.

Included in the exhibit are movie posters from the silent film “Evangeline” produced in 1913; reproductions of illustrations that accompanied the many publications of the poem; memorabilia from the Maritime Provinces and Louisiana; books; costumes; and advertisements.

The exhibit will be on display at the Acadian Archives/Archives acadiennes through December and is open weekdays 8 a.m. to 4:30 p.m. Pelletier said she will make special accomodations for any group or organization that cannot attend the exhibit during regular hours. For more information, contact her at (207) 834-7535. 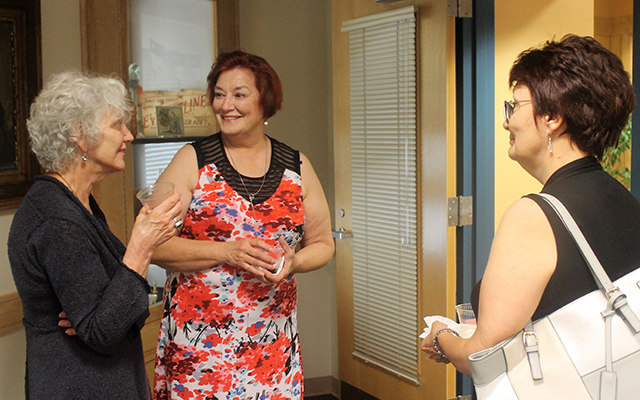 Acadian Archives/Archives acadiennes of the University of Maine at Fort Kent Director Lise Pelletier (center) greets visitors at the opening of the exhibit “Evangeline” on Thursday, July 5. (Jessica Potila)

As the Maine Turnpike expects 1 million travelers alone over the Labor Day weekend, policymakers are gearing up for a sprint to solve one of the state’s most intractable problems: a long-standing — and growing — transportation funding gap.
Apex Weather END_OF_DOCUMENT_TOKEN_TO_BE_REPLACED

The Valley will receive an inch or less of accumulation from Thursday's system based on current forecast model data.
Our Sponsors END_OF_DOCUMENT_TOKEN_TO_BE_REPLACED