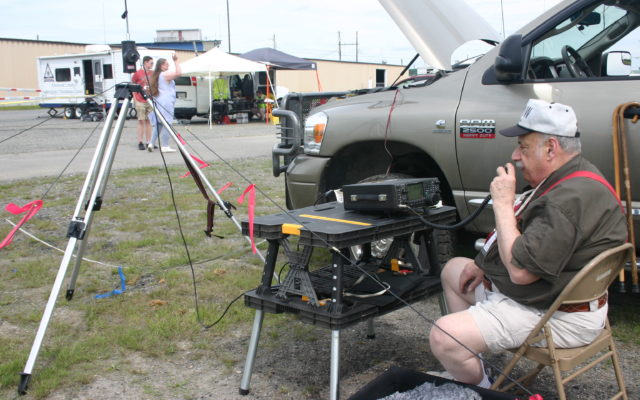 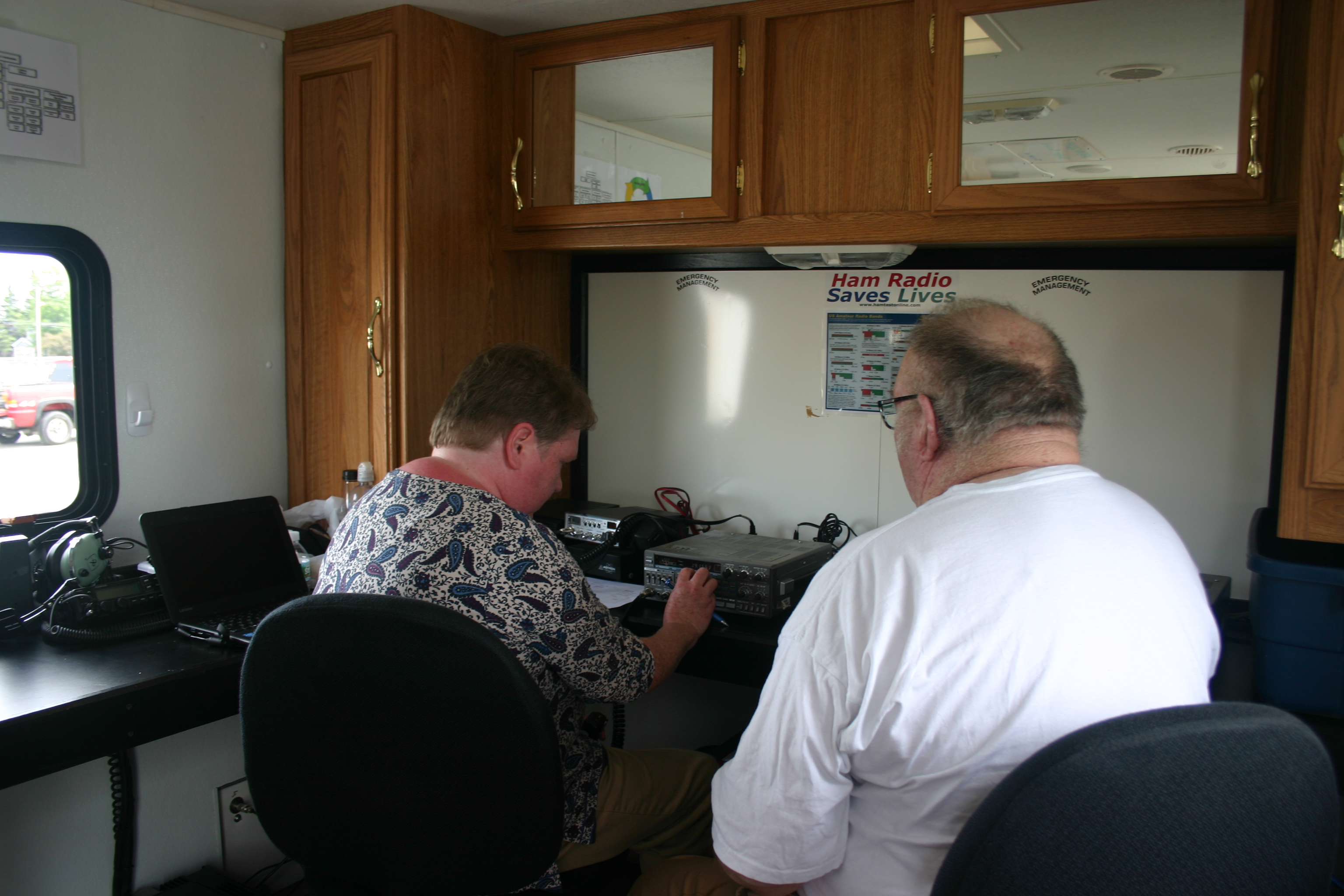 Tammy Deschene (left), of Presque Isle, searches for HAM radio signals during the annual nationwide amateur radio field day held at the Northern Maine Fairgrounds this past Saturday and Sunday, while fellow radio operator Sonny Packard, of Mapleton, looks on. Both Deschene and Packard are members of the Aroostook Amateur Radio Association and are two of the hundreds of amateur HAM radio operators in Aroostook County. (Melissa Lizotte | Star-Herald)

The AARA spent 24 hours — from 2 p.m. on Saturday to 2 p.m. on Sunday — participating in the nationwide Amateur Radio Field Day at the Northern Maine Fairgrounds in Presque Isle. Participants, all of whom are club members and operators, kept detailed records of who they contacted and when in an attempt to win the contest for most radio contacts.

There were no monetary prizes, but the real reward for members like Packard is being able to communicate with fellow radio enthusiasts all over the country and the world.

“I’ve talked to people in just about every country there is,” Packard said, while taking a break from the radio control center. He has been a member of AARA since the club began in 1976, but has been involved with amateur radio much longer.

“Sixty years ago I had a friend who was a HAM operator, and he got me into all this,” he said.

People who become licensed radio operators also commit to serving communities through Aroostook Radio Emergency Services and the Radio Amateur Emergency Services, a protocol created by the Federal Communications Commission. Currently 24 operators from Aroostook County are part of the ARES team, which can communicate with police officers, firefighters, hospitals and emergency medical technicians in the event of a major emergency.

Amateur radio operators become even more crucial during emergencies in which power lines are knocked down and cell phone usage becomes impossible, such as last year’s deadly hurricanes in Puerto Rico, according to local ARES team coordinator and AARA member Roy Woods.

“We have HAM radio systems in all four hospitals in Aroostook County and in the nursing homes. If a big disaster were to happen we could communicate with all the hospitals at the same time and determine how many patients they can handle,” said Woods, of Caribou.

“We can also contact Eastern Maine Medical Center and arrange for a chopper or an Angel Flights plane to fly up here. Every month we have volunteers test the HAM systems for the emergency rooms,” he added.

Woods has been a member of AARA for six years, but many of its 53 members have been with the club since it started. Between AARA and the St. John Valley Amateur Radio Association, hundreds of HAMs operate in Aroostook County, many of whom have radio systems set up at their homes to communicate with their long-distance friends.

At Saturday’s field day, operators set up radio equipment in several locations on the fairgrounds, including in trailers and underneath canopy tents. AARA President and ARES member Ivan Shapiro set up his battery-operated radio on an old woodworking table, with a tall portable antenna standing nearby. He explained that HAM radios have several bands that start at 10 meters of frequency and go up to 80 meters.

“Right now I can hear someone on 40 meters, but they can’t hear me,” he said, after trying unsuccessfully to talk to radio operators in Pennsylvania and New York. He then explained that operators at the field day would have varied luck in their signals depending on their location.

Shapiro, who lives in Fort Fairfield, is a retired cardiovascular surgeon who has been a member of AARA for nine years and president for around seven years. He first gained an interest in HAM radio as a teen but never became a licensed operator until after his retirement. At home he now has an 85-foot tower and antenna, power supplies, radios and computers.

He can even hook up his radio to a computer and use a software called EchoLink to communicate via streaming audio technology, all without the aid of a modern cell phone. He calls the service “HAM radio texting.”

“It’s a wonderful hobby and community service and I regret not getting licensed when I was younger,” Shapiro said. “I’ve made friends with people in Asia, Europe, Africa, New Zealand and Australia. I love giving my call sign and hearing someone say, ‘Hello, Ivan. I haven’t talked to you in three months. How are you?’”

AARA members meet on the first Thursday of each month at 6 p.m. at the Mark and Emily Turner Memorial Library in Presque Isle and those who are interested in learning more about amateur radio licensing can contact Shapiro at wk1w@ivanshapiro.com.