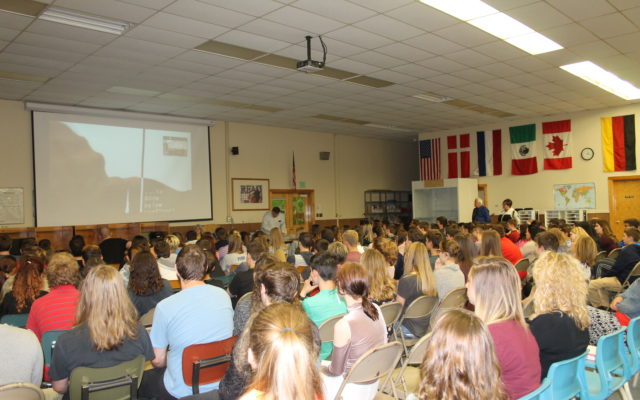 Morgan Mitchell • June 18, 2018
Students from high schools in Madawaska, St. Agatha and Fort Kent recently took a virtual tour of a ship to see how scientists on board are extracting samples of a volcano miles below the surface of the ocean.

MADAWASKA, Maine — Students from high schools in Madawaska, St. Agatha and Fort Kent recently took a virtual tour of a ship to see how scientists on board are extracting samples of a volcano miles below the surface of the ocean.

The Joint Oceanographic Institutions for Deep Earth Sampling Resolution is a ship made up of different scientific tools that help scientists study the seafloor, specifically the Brothers Volcano, the most active underwater volcano, located near New Zealand.

MMHS science teacher Lisa McDermott organized the interactive tour via Zoom, a video calling service, for the students to learn more about earth science and see the world outside of Aroostook County.

“I wanted to share this with my students because it’s a powerful teaching tool about innovations in science,” McDermott said. “Our curriculum is a bit more thin on earth science than we’d like, and it exposes our students to a variety of careers in STEM.”

The careers in STEM (an acronym for science, technology, engineering, and math) vary widely on the ship according to McDermott.  “The people aboard — just all the different branches of science alone — represent a dizzying variety of careers, but there are also the engineers, welders, and electricians. It’s an amazing collaboration,” she said.

The ship, carrying the derrick and drills, had scientists from several different fields including microbiologists, geologists, physicists, chemists, petrologists, mineralogists, volcanologists, sedimentologists, and a paleomagnetist.

Lisa McDermott learned about this program and event from Dr. Jill McDermott, the science teacher’s daughter. Dr. McDermott grew up in the St. John Valley and is now across the world studying the Brothers Volcano.

The tour began with a short lesson on how the seafloor and layers of sediment are formed and how the scientists are extracting the core samples. After that, the students got to see how involved the process is for the scientists to dress in their safety gear on the ship. The students were then given a tour of the ship and shown samples of the core that were recently pulled up.

“We are going to leave some samples intact,” Jill McDermott said from the ship. “We want to leave some for the future generation, you guys, because there is no telling what innovations you will come up with.”

Six students from Wisdom Middle High School and 16 from Fort Kent Community High School participated in the virtual tour with the Madawaska High School students. Lisa McDermott said that she contacted the other schools because the St. John Valley is in the process of merging services.

“I’ve been working on curriculum matters with high school science teachers from Wisdom and Fort Kent and knew I’d have a better chance of being accepted by the JOIDES education officers if I could provide them with a large viewing audience,” she said.

The science teacher plans on doing more events like this in the future as well as to work with the scientists on the ship.

“We can send away and borrow cores, so I’m studying ways to incorporate some learning activities with cores into chemistry class or biology class,” she said.

Maine’s longest serving legislator, Martin was first elected to the Maine House of Representatives in 1964 when he was 23.
Our Sponsors END_OF_DOCUMENT_TOKEN_TO_BE_REPLACED