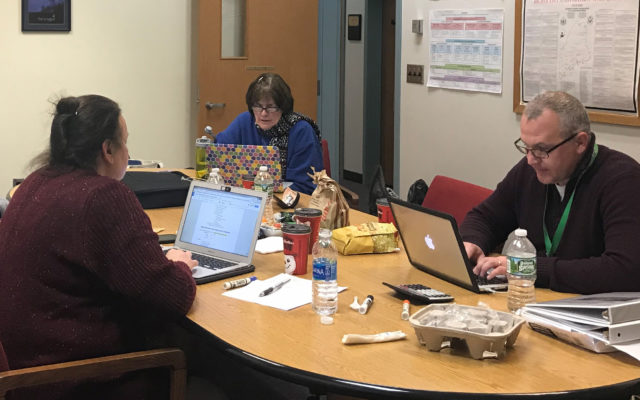 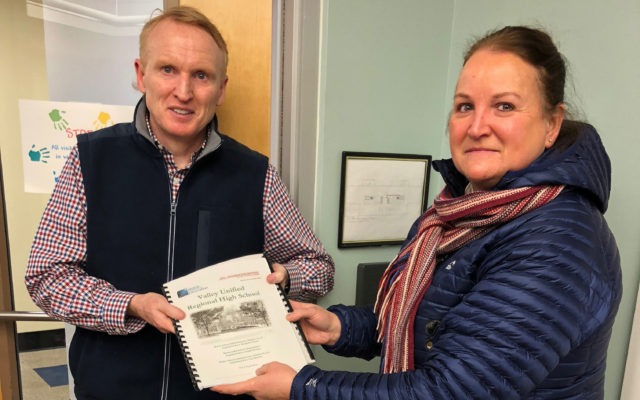 Madawaska School Superintendent Gisele Dionne delivers the St. John Valley education collaborative’s final application for an Integrated, Consolidated 9–16 Educational Facility to the Maine Department of Education’s Facilities Director Scott Brown on Dec. 29, 2017. The Board of Education revealed on June 13 that the Valley project has the top score among the three finalists. (Contributed photo) 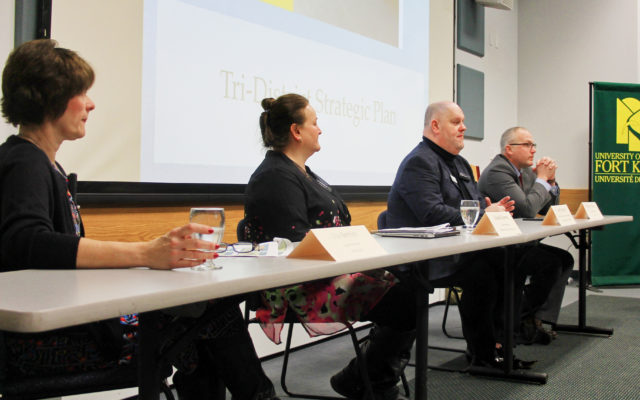 The three noted that enrollment in the combined districts had dropped by more than 1,000 students, or 42 percent, over a 20-year period between 1997 and 2017. They also indicated that the region is expected to lose another 200 students in the next five years with nearly 50 school staffers estimated to reach retirement age in the next decade.

The three superintendents met with state Department of Education officials in Augusta on Aug. 16 to discuss the next steps, including site selection and the construction bidding process.

The Aug. 14 state approval was the final step in developing a priority list, according to Rachel Paling, communications director for the Maine Department of Education.

“All the analysis, review and scoring work as well as the administrative review process is now complete,” Paling wrote in an email Wednesday. “The next step is for the commissioner to recommend a pilot project or project(s) to be placed on the ‘Approved Projects List.’  That placement would be the formal commitment to initiate the project. “

Such a recommendation, which would include a timeline for concept approval and the district referendum, could be presented to the State Board of Education as early as September, she said.

The board of directors of the Valley Unified Regional Service Center​ will hold their first board meeting on Thursday, Aug. 23, at 6 p.m. at the St. John Valley Technology Center in Frenchville. The meeting, open to the public, will include an update about Thursday’s meeting in Augusta between the Valley superintendents and the DOE.

Three candidates are vying for two seats on the Fort Kent Town Council. Voters will decide which of the three -- Corey Pelletier, Brandon Dayton or Andrew Caron -- will get a seat during the town’s annual election on Monday, March 22.
Apex Weather END_OF_DOCUMENT_TOKEN_TO_BE_REPLACED

A warm front lifting across the region this morning will lead to increasing clouds with snow overspreading the area later this morning. A cold front will move through this afternoon with snow likely for a period before tapering off behind the front this evening with overnight lows occurring relatively early around midnight.
Our Sponsors END_OF_DOCUMENT_TOKEN_TO_BE_REPLACED