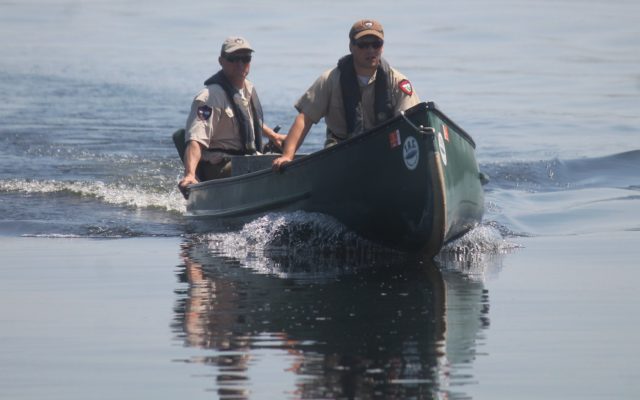 Jessica Potila, SJVT / FhF Staff Writer • June 6, 2018
St. John Valley anglers can be confident that the sport of salmon fishing continues to have a promising future at Long Lake.

SINCLAIR, Maine — St. John Valley anglers can be confident that the sport of salmon fishing continues to have a promising future at Long Lake. 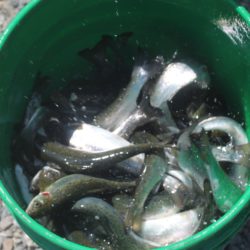 The Department of Inland Fisheries and Wildlife deposited 4,000 salmon into Long Lake on Thursday, May 31.
(Jessica Potila)

Maine Department of Inland Fisheries and Wildlife regional fisheries biologist Frank Frost stocked the lake on May 31 with 4,000 landlocked salmon.

Fish culturists with the department’s Grand Lake Fish Hatchery cultivated the fish from the eggs of wild spawning salmon they trapnetted near the outlet of West Grand Lake.

“These guys do a great job in the hatchery,” Frost said on Thursday.

The salmon stocked that day were 15 months old — what biologists term “spring yearling” fish —  and 6-8 inches long with an average weight of about a quarter pound.

Hatchery employees Derick Lee and Joshua Kuester bucketed the fish from IFW tank trucks and moved them into aerated buckets in a canoe which Frost and his son, IFW field technician Noah Frost transported out onto the lake for stocking.

The fish may have been more comfortable than the employees that day as temperatures soared to near 90 degrees.

Maine supports one of the largest sport fisheries for landlocked salmon in the world, and 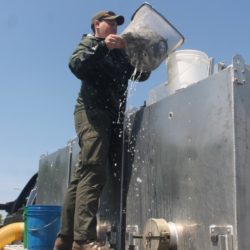 Derick Lee (left) looks on as his fellow Department of Inland Fisheries and Wildlife fish culturist Joshua Kuester, gathers a bucket of salmon from a tank to pour into Long Lake on Thursday, May 31.
(Jessica Potila)

Long Lake, at about 6,000 acres is an especially popular destination for salmon fisherman, according to Frank Frost.

He explained that one angler day amounts to one person fishing for about 4-5 hours.

“Fish stocking in Maine provides a total economic impact of tens of millions of dollars each year in the state of Maine, resulting in a huge return on just a $3 million annual investment from fishing license sales,” according to the IFW website.

Long Lake contains 23-24 species of fish, according to Frank Frost, with salmon, smelt and trout being the most popular among anglers there.

Salmon feed on smelt, which are abundant in Long Lake at this time; so much so, that thousands of dead smelt recently washed up on the shores of Long Lake.

Some residents of the area were worried that the lake water may be contaminated when the smelt began washing ashore, but Frank Frost explained that the phenoma was entirely natural and a good sign as far as fishing on the lake is concerned.

“There were huge smelt runs this spring in many of the brooks around the lake. Once they are done spawning, some of the smelt are so beat up and exhausted they don’t survive,” he said. 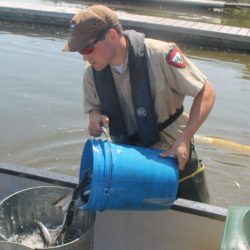 Department of Inland Fisheries and Wildlife field technician Noah Frost prepares salmon for a canoe trip out onto Long Lake on Thursday, May 31.
(Jessica Potila)

With so many smelt, there were all the more to wash up dead on the shore after they had completed spawning, he said.

The IFW also has been keeping tabs on Long Lake salmon, and after measuring them this past winter, Frost said the salmon were the largest they had seen them on average in at least 30 years.

During what’s known as a “creel survey” of anglers ice fishing between Jan. 1 and March 31, IF&W staffers observed a sampling of 153 salmon, according to Frost, which averaged 19.4 inches and 2.9 pounds.

“The largest salmon we measured was 8.5 pounds and was 24.5 inches — caught by Marc Deschaine of Fort Kent,” said Frost, adding that the fish had been stocked as a spring yearling in 2015.  “The oldest salmon we saw this past winter was age 6 and most of the fish we saw were 3 years old. There were also lots of 2-year-old fish that would have been stocked in June 2017 that averaged 15 inches and 1.2 pounds.  This means that in less than 8 months in the lake the salmon stocked in June 2017 grew from 7 inches to 15 inches and their weight increased 6 times. This is a very good sign that smelt are recovered in the lake and the salmon are growing well. “ 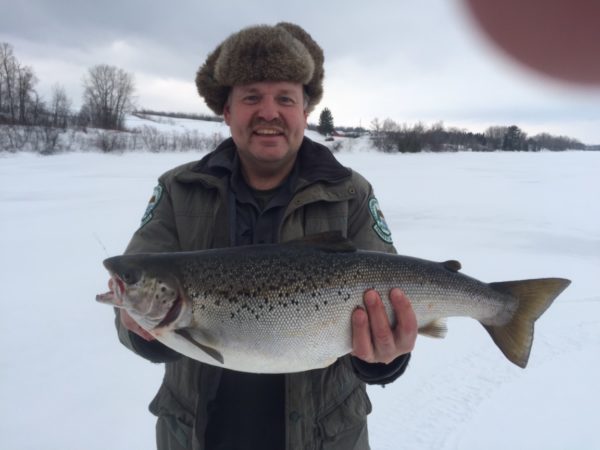 Deep low pressure near Newfoundland will keep breezy conditions across the SJV today and tonight as it interacts with high pressure building down from the northwest.
Our Sponsors END_OF_DOCUMENT_TOKEN_TO_BE_REPLACED