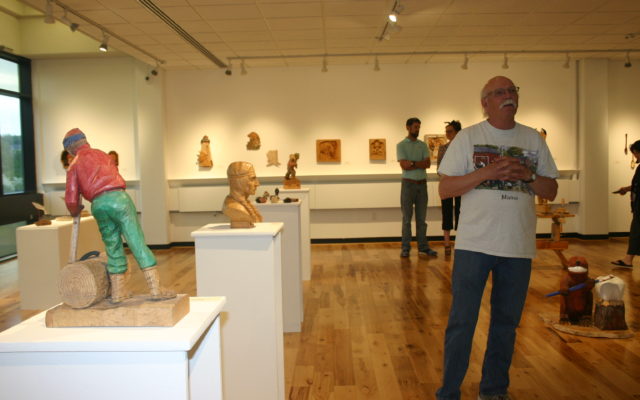 Melissa Lizotte • June 4, 2018
Tom Cote, a native of Limestone, has been a wood carver since his mother, Rena Cote, first began teaching him the craft when he was 11 years old.

PRESQUE ISLE, Maine — Tom Cote, a native of Limestone, has been a wood carver since his mother, Rena Cote, first began teaching him the craft when he was 11 years old. Nearly 60 years later Cote is a fifth-generation wood carver and an art teacher who has inspired numerous students to hone their craft one piece of wood at a time.

“I always tell my students, ‘Carve what you know and take lots of pictures that you can look at as you’re working.’ That’s what’s going to give you detail and depth,” Cote said, during his First Friday Downtown Art Walk exhibition at the University of Maine at Presque Isle on June 1.

Cote displayed 47 basswood, cedar and butternut carvings at the Reed Fine Art Gallery, many of which were inspired by his childhood and Acadian and Canadian French ancestry. He often has carved scenes of people and places that he has met and seen such as his family’s log cabin, a maple sugar farmer tapping trees by hand and a blacksmith working in his shop.

Though he has worked on his art since he was a child, Cote did not become serious about wood carving until he was 25. He studied the craft in Saint-Jean Port Joli, Québec, and made his home in Limestone, where he established the art program at the Maine School of Science and Mathematics. He now teaches wood carving, painting, black and white photography, and drawing at his home studio.

Two of Cote’s youngest wood carving students — Hannah Chartier, 10, and her brother Ben Chartier, 8, of Fort Fairfield — came to support their teacher at his exhibition. Both siblings have been taking lessons from Cote since January 2018.

“I like how you can take a plain piece of wood and turn it into something really cool,” Hannah Chartier said, about why she likes wood carving. “I’ve carved a horse and colt and another wood piece that’s a pear.”

“He’s a very encouraging teacher,” said Amy Chartier, Hannah and Ben’s mother. “Even when they make a mistake he finds a way to explain the process to them so that they don’t view it as a bad thing.”

During his career the Maine Arts Commission has recognized Cote as a “master carver” and awarded him four teaching apprenticeships in which he taught students who have gone on to hold their own exhibitions and further develop their art. As a young wood carver he was an apprentice under three family relatives — Jacques Pier Cloutier, Denoi Deschenes and Robert Roy. Many of his carvings have won “Best in Show” at state and regional wood carving exhibitions.

Cote stated during his artist talk that some of the smaller wood carvings he has done over the years, such as the club ducks made from basswood, have taken only an hour and a half to create while the larger pieces can take over 60 hours apiece. He prides himself on still using hand tools — chisels, mallets and knives — as opposed to power tools, a tradition that began with his ancestors in Quebec and the St. John Valley.

He still has the first knife that his mother gave him when he was 12 years old, which she paid only $1 for back in the late 1950s.

“It still works after all this time,” Cote said, holding up the knife. “The Acadian way of wood carving is about detailed work and so I like being able to feel the wood in my hands.”

Today, Cote’s two granddaughters — Ellyzabeth and Kennedy Bencivenga — are sixth-generation wood carvers, both of whom developed their talents under his guidance. He hopes to inspire artists both young and old to create and preserve what he believes is a vital art in Aroostook County.

“When I began teaching there were only two Acadian carvers left in the St. John Valley,” Cote said. “So I decided then that perhaps teaching wood carving would be my niche.”

Cote’s exhibit, “From Roots to Bark: The Acadian Way With Wood,” is on display at UMPI’s Reed Fine Art Gallery in the Center for Innovative Learning through Friday, Aug. 3, when it also will open again for the First Friday Downtown Art Walk. For a complete schedule for First Friday exhibitions go onling to: https://www.facebook.com/PresqueIsleFirstFriday/.

A broad area of low pressure crossing the state will bring widespread rainfall to the entire SJV today and tonight. Rain tapers to showers Thursday morning with showers lingering into the evening hours as the low lifts to the northeast.
Our Sponsors END_OF_DOCUMENT_TOKEN_TO_BE_REPLACED