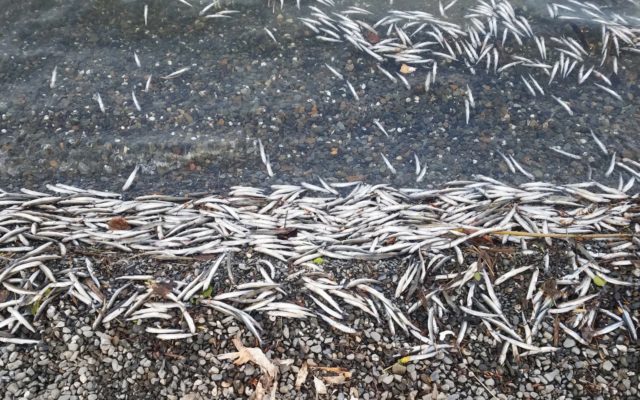 Beached smelt ‘no cause for concern’ at Long Lake

Jessica Potila, SJVT / FhF Staff Writer • May 30, 2018
When people see thousands of dead fish washed up on a beach, the natural inclination is to think something must be wrong with the water.

ST. AGATHA, Maine — When people see thousands of dead fish washed up on a beach, the natural inclination is to think something must be wrong with the water.

When so many smelt washed up on the shores of Long Lake this past weekend, it was actually a good thing, according to Frank Frost a regional fisheries biologist with the Maine Department of Inland Fisheries and Wildlife.

St. Agatha Town Manager Aubrey Michaud said that as of Tuesday morning, multiple residents had contacted her with concerns about the beached smelt, which by that time had covered a large portion of the Long Lake perimeter.

Some residents were worried that the lake water may be contaminated. One resident expressed concern that he had not observed seagulls eating the bounty of fish.

There is nothing to worry about in either case, according to Frost.

Frost said that, to begin with, smelt have a short life cycle of only 1.2 years to 1.4 years.

“There were huge smelt runs this spring in many of the brooks around the lake. Once they are done spawning, some of the smelt are so beat up and exhausted they don’t survive,” he said.

With so many smelt, there were all the more to wash up dead on the shore after they had completed spawning, he said.

The size of the salmon in Long Lake also is an indicator that the smelt there are doing well, according to Frost. Smelt are a natural food source for salmon, and Inland Fisheries and Wildlife officials have been keeping tabs on that fish as well.

“The salmon we measured on the ice this past winter were the largest we’ve seen on average in at least 30 years, so we are not concerned about the health of the smelt population at this time,” Frost said.

Frost dispelled another concern of some local residents when he said that the smelt having washed up on the shores of Long Lake is not related to recent flooding on the Fish River Chain of Lakes.

Frost added that the decaying smelt add nutritional benefits to the animals feeding on them by providing nutrients to help boost the food chain and “help the next generation get a nice lift.”

“Birds feed on them, racoons; there are all kinds of different mammals and birds that are taking advantage of them,” he said.

Frost said that the large number of smelt is a winning situation for fishers, the smelt themselves, and the animals who feed on them.

“They’re all positive things, but it is a nuisance to have dead fish on your beach,” he said.

Frost did advise that people should probably refrain from swimming in Long Lake for the time being, but added that given the cold water temperature this time of year that would likely not be an issue. He also said that people should not attempt to eat the washed up smelt, which begin to grow fungus even before they die.

Frost said the incursion of dead and dying smelt on the shores of Long Lake should disappear in about a week.