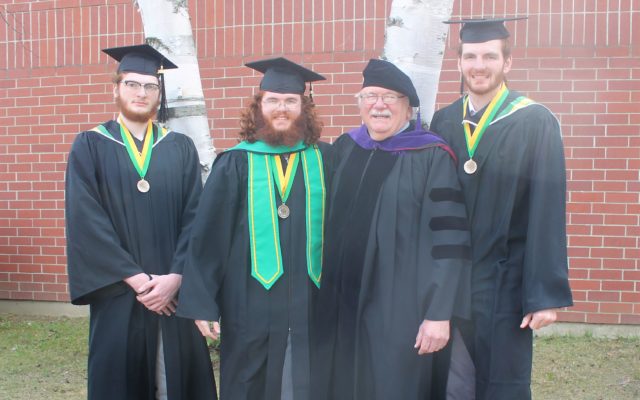 Jessica Potila, SJVT / FhF Staff Writer • May 13, 2018
Dr. Tony Enerva looked on with joy as all three of his sons graduated together from the University of Maine at Fort Kent on Saturday, where Enerva is an associate professor.

FORT KENT, Maine — Dr. Tony Enerva looked on with joy as all three of his sons graduated together from the University of Maine at Fort Kent on Saturday, where Enerva is associate professor of public safety administration and criminal justice.

“I’m a very proud dad,” Enerva said. “It’s a dream for me to be teaching at a college where all three of my sons are graduating with their degrees. Since they were kids, it’s something I’ve been preparing for.”

Both Tom and Joe Enerva plan to continue their business studies at Fort Kent to earn their bachelor’s degrees.

Sam Enerva is seeking a job with the federal government related to homeland security.

Being the sons of a professor, the brothers grew up with the understanding that attending college was not just an option, but an expectation.

Tony Enerva raised both Tom and Sam for the past 12 years in his Fort Kent home following his divorce from the children’s mother, Evelyn Woolman of Ohio. Joe lived with his mom in Ohio, graduating from high school there, but spent many holidays and each summer with his father and brothers. Joe chose to move to Fort Kent after graduating high school to live with his dad and brothers in Fort Kent and attend university there.

“I always gave each of them 100 percent unequivocal love and support even during difficult times,” Tony Enerva said. “Leading by example and emphasizing the positive helped the boys to develop strong values and pleasant personalities.”

Growing up in the Enerva household was fun but structured, the brothers said, and that involved a lot of bike riding, sports, swimming and other outdoor activities.

“There were always five or six kids at our house; it was kind of the main hub of the area,” Sam Enerva said. “We would gather here and figure out what we wanted to do.”

Tony Enerva said he always encouraged his sons’ friends to spend time at his home.

Tom Enerva, who plays on the university’s Bengals men’s basketball team said he refers to his dad as a “father-mother.”

“For all of these years, he has been a father as well as done all of the motherly things,” he said.

“Some of the values I instilled in the boys are to respect and treat everyone as you would like in return, do your best, build bridges and look forward to the future,” Tony Enerva said. “Of course, education is the cornerstone of our values and can be accomplished through learning, studying, traveling, listening, relationships and living a full life.”

Such educational experiences included a 32 day trip to Europe in 2015 when the four Enerva men visited eight countries. This summer, they plan to visit the Rocky Mountains for a month and see 10 national parks.

Living with their professor father during college had both advantages and disadvantages, according to the Enerva sons, all three of whom wound up in at least one of their dad’s classes.

“He’s gonna know if the assignment’s late,” Joe Enerva added. “But there was also an ease of getting information. I could just yell up the stairs, ‘What do you want on this assignment?’”

“Yeah, there was a little bit more one-on-one time with the professor,” Tom Enerva said with a laugh.

Tony Enerva said he is proud of his boys for their achievements, which also include Tom and Joe Enerva recently earning their S130/190 Wildland Firefighter certifications. He is also pleased that Sam earned two degrees and graduated with honors, and that “Joe discovered a new bacteriophage in his genetics class and was invited to present his findings at a scientific conference at the Howard Hughes Medical Institute in 2016.”

“My focus and life revolves around the boys and their happiness and successes. The sacrifices have been many, but the results are the awesome sons; life is good,” he said.

Maine’s longest serving legislator, Martin was first elected to the Maine House of Representatives in 1964 when he was 23.
Our Sponsors END_OF_DOCUMENT_TOKEN_TO_BE_REPLACED