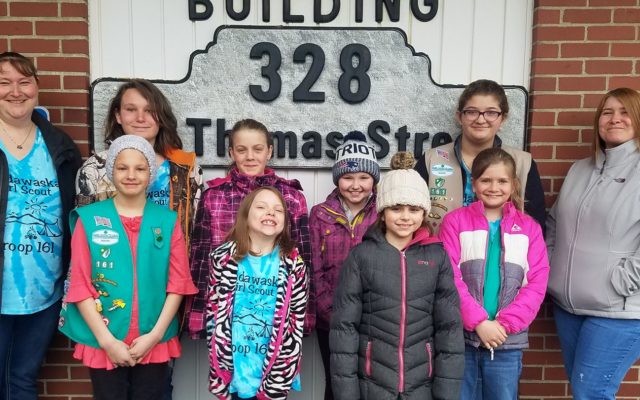 Austin Bragdon, Special to the Fiddlehead Focus • April 24, 2018
Members of Madawaska Girl Scouts Troop 161 presented two items to the town’s Board of Selectmen on April 17 as part of the organization’s continuing mission to give back to, and enrich their community.

Members of Madawaska Girl Scouts Troop 161 presented two items to the town’s Board of Selectmen on April 17 as part of the organization’s continuing mission to give back to, and enrich their community.

One item was a U.S. flag and the second was a cedar bench that the troop’s junior members hand crafted. 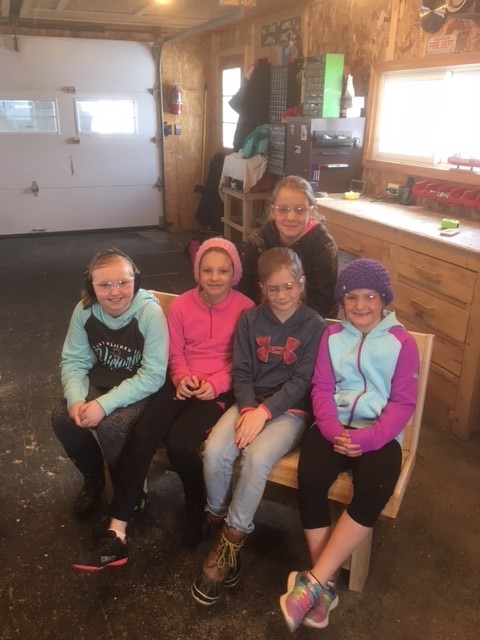 Junior Scouts who are part of Troop 161 in Madawaska sit on a bench that they built to donate to the town and place in Bicentennial Park when weather permits. Sitting from left are Samantha Thomas, Dinesha Sirois, Peyton McKinley, and Ainsley Migneault. In back is Zoe Rioux. (Jean Thomas photo)

After taking a walk around Madawaska, the girls developed a list of things they could do to impact their community. Following an extensive process of narrowing down potential projects, the girls decided to replace the U.S. flag hanging above the town office building. According to Jean Thomas, a mentor to the Girl Scouts, Troop 161 always has dedicated itself to its community and to area veterans, so the members were unhappy seeing the town’s flag tattered.

The new flag was purchased using funds from selling Girl Scout cookies. The girls had to sell roughly 30 boxes of cookies to raise the $20 purchase price of the flag.

The second donation, the cedar bench, was built by Troop 161’s Junior Scouts. The bench is part of their effort to earn the highest award available to Girl Scouts at their level — the Girl Scout Bronze Award. The guidelines for the bronze award emphasize planning, leadership, and the ability to identify where projects might be the most helpful.

The materials to build and stain the bench all were donated by local businesses, and the Junior Scouts built the bench themselves, using nail guns and electric drills. Each Junior Scout contributed at least 20 hours to the project which started in November. Once the weather allows, the Girl Scouts will stain the bench. After the ground has thawed, the bench will be placed in Madawaska’s Bi-centennial Park using cement so that it will be a permanent fixture.

The selectmen on April 17 unanimously accepted both donations from the Scouts. Denise Duperre, thanking the members for their dedication, said, “We are probably looking at some future leaders.” Another selectman remarked that “the project that you put together shouldn’t go unnoticed.”

The bronze award will be officially presented to the Junior Girl Scouts during a Bridging Ceremony scheduled for June 1 at Fort Kent High School.

High pressure will bring mostly clear to partly cloudy skies to northern Maine today and tonight as low-pressure slides east of the region in the southern part of the state.
Campaign Corner END_OF_DOCUMENT_TOKEN_TO_BE_REPLACED

Dale Crafts filed his nomination papers for Feb. 21 with the Secretary of State to officially be placed on the primary ballot on June 9, 2020, for the U.S. House of Representatives 2nd District race.
Our Sponsors END_OF_DOCUMENT_TOKEN_TO_BE_REPLACED