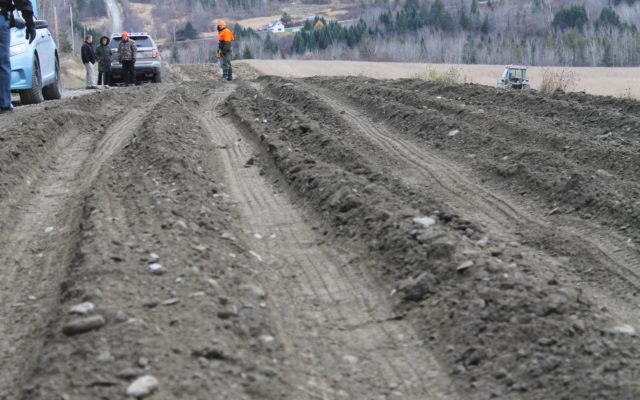 Jen Lynds, BDN Staff • April 19, 2018
A Madawaska man is scheduled to go on trial later this month on charges connected with his using farm equipment to dig up a portion of a disputed road in Frenchville.

FRENCHVILLE, Maine — A Madawaska man is scheduled to go on trial later this month on charges connected with his using farm equipment to dig up a portion of a disputed road in Frenchville.

Bruce Ouellette, 45, has requested a jury trial that, according to a court clerk, is scheduled to start on April 23 in Aroostook County Superior Court in Caribou. The charges of aggravated criminal mischief, reckless conduct, and obstructing government administration stem from an Oct. 31, 2016, incident that took place on Pelletier Avenue in Frenchville.

The roughly one-mile long unpaved section of the road has been at the center of controversy for more than a year regarding whether it is a private or public road.

According to court records, an Aroostook County grand jury indicted Ouellette in February 2017 on the charge of aggravated criminal mischief for allegedly “intentionally, knowingly, or recklessly” damaging a portion of the town road. Jurors indicted him on the reckless conduct charge because he allegedly “created a substantial risk of serious bodily injury” to a passerby “with the use of a dangerous weapon, a steel pin.” The document does specify what Ouellette did with it.

The grand jury also charged him with obstructing government administration for allegedly interfering “by force, violence, or intimidation or by a physical act” with public officials carrying out their official functions.

Ouellette pleaded not guilty to all of the charges in April 2017.

According to court documents, the controversy stemmed from whether a roughly one-mile stretch of Pelletier Avenue is public or private. Ouellette and other family members, including his brother Calvin Ouellette, maintained that part of the road is located on their farm property. The town, meanwhile, has been maintaining the road, including plowing it in the winter, as though it were a public way for 20 years.

Just three families live on the section in question, although other area residents also use the road to travel between Frenchville and Madawaska. According to the Maine Department of Transportation, daily traffic averages out to about 200 vehicles per day over the year.

After his brother’s actions stopped the town from paving that part of the road, Calvin Ouellette filed a civil suit on behalf of the family against the town over ownership of the land it sits on.

Town Manager Ryan E. Pelletier said recently that while a settlement agreement in the civil case with the Ouellettes was finalized by a judge last year, the town is “not quite happy with it” and attorneys for the community are still reviewing the judge’s ruling.

“We have hired Eaton Peabody out of Bangor to look over it,” he said on Wednesday. “There are some differences of opinion over land easements. The final product is not what we talked about, in our opinion.”

Bruce Ouellette’s attorney, Toby Jandreau of Fort Kent, did not return calls to his office seeking comment on the case.

As the Maine Turnpike expects 1 million travelers alone over the Labor Day weekend, policymakers are gearing up for a sprint to solve one of the state’s most intractable problems: a long-standing — and growing — transportation funding gap.
Apex Weather END_OF_DOCUMENT_TOKEN_TO_BE_REPLACED

The Valley will receive an inch or less of accumulation from Thursday's system based on current forecast model data.
Our Sponsors END_OF_DOCUMENT_TOKEN_TO_BE_REPLACED