Jessica Potila, SJVT / FhF Staff Writer • April 14, 2018
A 16-year-old Winthrop High School sophomore with a love for northern Aroostook is in the running for a Maine Outdoor Film Festival award for a short film he directed and produced about the Can-Am Crown International Sled Dog races.

FORT KENT, Maine — A 16-year-old Winthrop High School sophomore with a love for northern Aroostook is in the running for a Maine Outdoor Film Festival award for a short film he directed and produced about the Can-Am Crown International Sled Dog races.

The movie is a top ten finalist in the festival’s 2018 Winter Broke and Stoked Video Contest. He made the piece for a film production class he is taking at school. 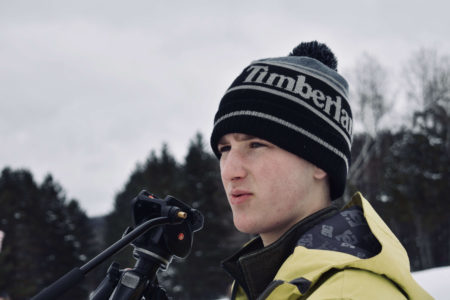 Ian Dow said he was inspired to film the movie about the Can-Am Crown due to the many vacations he has taken to Fort Kent to visit both sets of grandparents.

Pat and Allan Dow have been Can-Am volunteers since the race began, so Ian Dow said he grew up attending the event.

“Fort Kent does a great job putting on great events (like) the Can-Am and the Muskie Derby. It’s a really cool environment. I love getting up there,” Ian Dow said.

“When he sets his mind to it, he can pretty much master anything,” she said. “When I saw his first cut (of the movie) I was just absolutely blown away.”

Ian Dow said he would like to thank his girlfriend and assistant director Samantha Allen who helped to film the movie short with her own camera and Winthrop High School educator Tiff Shaw who inspired him to become interested in film and who also assisted him in editing “Can-Am Crown Dog Sled Race.”

When Ian Dow is not making potentially award winning short films, he plays on the lacrosse and soccer teams at Winthrop High School where he also is an honor student. After graduation, he plans to attend college to study engineering. He said he would like to move to Fort Kent someday.

To vote for “Can-Am Crown Dog Sled Race,” or any of the other nine finalists in the 2018 Winter Broke and Stoked Video Contest visit maineoutdoorfilmfestival.com/brokeandstoked/ The deadline for voting is April 22.

Maine’s longest serving legislator, Martin was first elected to the Maine House of Representatives in 1964 when he was 23.
Our Sponsors END_OF_DOCUMENT_TOKEN_TO_BE_REPLACED