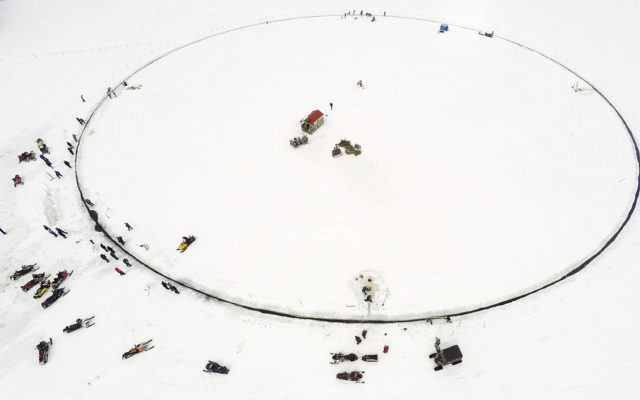 Jessica Potila, SJVT / FhF Staff Writer • April 8, 2018
Hundreds of volunteers who set out to create a world record-sized ice carousel on Long Lake in Sinclair saw their perseverance pay off on Saturday as they were able to make a 22 million pound circular chunk of ice spin, despite previous attempts thwarted by Mother Nature.

SINCLAIR, Maine — Hundreds of volunteers who set out to create a world record-sized ice carousel on Long Lake in Sinclair saw their perseverance pay off on Saturday as they were able to make a 22 million pound circular chunk of ice spin, despite previous attempts thwarted by Mother Nature.

The volunteers used augers and chainsaws to cut a 427-foot diameter circle through some 31 inches of Long Lake ice over three days in March, but weren’t able to get the free floating ice chunk to spin more than six inches, before extreme cold caused edges of the carousel to refreeze in places.

Four outboard engines like this one were used to rotate a massive 427-foot diameter circle of ice cut out of Long Lake in Sinclair over the April 7-8 weekend. Volunteers say it’s large enough to beat the old record of a 400-foot ice carousel held by a town in Finland.
Paul Cyr Photography

Armed with the knowledge they acquired that weekend and in anticipation of warmer temperatures, enthusiastic volunteers returned to Long Lake this weekend to try again. After cutting through and widening the trench this time, crews set up four outboard motors and at about 11:30 a.m. on Saturday began to rotate the carousel in earnest.

Snowmobile Northern Maine hosted the ice carousel endeavor as a fundraiser for the Aroostook County Meals on Wheels program, which provides local senior citizens with meals delivered to their homes.

Paraphrasing Theodore Roosevelt, Mike Cyr of Snowmobile Northern Maine said, “There’s no shame in a valiant effort. … If we had failed we would be just as happy as we are today because this was all done for our seniors and to have the ice carousel spin is just the gravy on the potatoes.

“The ice carousel has been like a magnet of positive energy. It is the result of teamwork and people coming together creating something from nothing which makes everybody feel good, and all along the way, we’re helping our seniors to put a hot meal on their plate; it’s a win-win for everyone.” 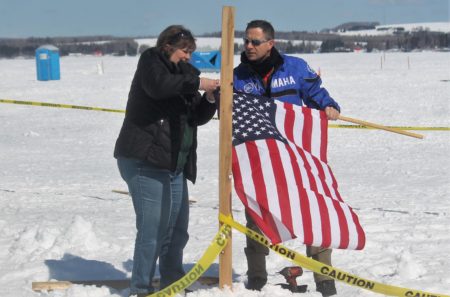 Donations and raffle ticket sales, with 67 prizes donated by local businesses, raised more than $5,000 for the local Meals on Wheels program.

With permission from Sargent Corp. owners, Raymond traveled to Fort Kent on Thursday. March 29, hauling a ledge trencher which the company loaned for the cause. Raymond volunteered his time to cut through and widen 1,150-feet along of the ice carousel’s frozen perimeter, leaving only about 200 feet for volunteers to cut through this weekend. This made efforts to spin the carousel easier this weekend, Cyr said.

Tim Cady of Plisga & Day land surveyors of Bangor verified this weekend the measurements of a 427-foot diameter with a perimeter of 1341 feet, according to Cyr. He added that the ice at Long Lake still was between 28-30 inches thick this weekend.

Jim Gamage of Rockport, one of the spectators this weekend, has been following the ice carousel effort since he learned about it while visiting the St. John Valley for a snowmobile vacation in March. 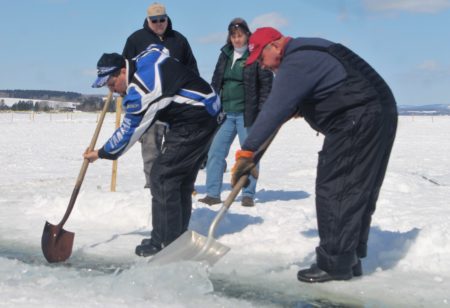 Volunteers free up the perimeter of an ice carousel on Long Lake by shoveling out chunks of ice on Sunday, April 8.
Jessica Potila|Fiddlehead Focus

“To think these guys would be willing to go out there in subzero temperatures and volunteer their time to do this is just outstanding,” Gamage said Sunday. “I was really happy yesterday when they got the thing spinning.”

Gamage said the efforts of the volunteers who put in their time to create the ice carousel exemplifies why he and his wife Michelle recently chose to purchase a vacation home on Cross Lake.

“My wife and I own and operate a temp agency back home and we’re constantly trying to find people to go to work. It’s always like such a letdown to think the work ethic is gone in the world today, but I’m here to tell you it’s not,” he said. “These guys are up here cutting ice and when they set their mind to it, its like were getting it done, no ifs ands or buts.”

Gamage was so inspired by the effort that he collaborated with his friend to donate a raffle prize to the Meals on Wheels fundraiser. 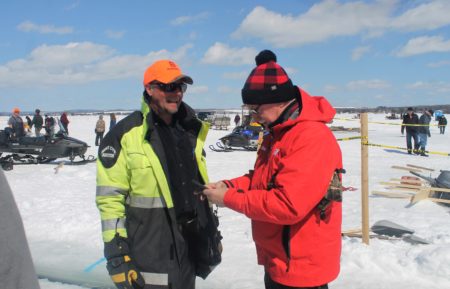 “This year my buddy Macho Carballo has been coming up (to northern Maine snowmobiling) with me. He is a sternman on a lobster boat and I asked him if he would split the cost of 25 pounds of lobster with me and he agreed,” Gamage said.

Pam Ward traveled to Long Lake from Hodgdon on Sunday to watch the ice carousel spin. She had been following the effort on the Snowmobile Northern Maine Facebook page.

“They were consistent in staying with it, that’s for sure,” she said of the volunteers. “They were gonna make it work and they did; I definitely applaud them for that.”

Until Saturday, the town of Lohja, Finland, held the ice carousel world record of 122 meters, or about 400.2 feet, in diameter, according to Cyr. He said the ice in the lake there was about 16-inches thick when the Finns created their record carousel in February. 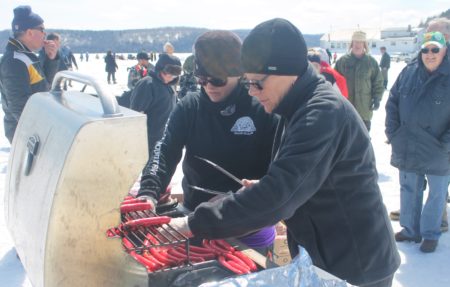 Cyr said he previously reached out to officials with Guinness World Records, but learned that the organization has no category on file for world’s largest ice carousel and chose not to sanction it at this time.

Nevertheless, volunteers and supporters celebrated with a free hot dog roast cooked on a grill on the spinning ice carousel on Sunday. The hot dogs, buns, beverages and condiments were donated by northern Maine businesses.

“When you have a team effort like this, it makes you feel good, because there’s always so much negativity in the world,”Cyr said. “We dwelled on the positive and ignored the negative and this just blossomed into a beautiful event.”

Cloudiness in the region Thursday afternoon along with a slight chance for isolated showers Thursday night and Friday.
Crown Politics END_OF_DOCUMENT_TOKEN_TO_BE_REPLACED