Jessica Potila, SJVT / FhF Staff Writer • April 5, 2018
The bid to create a world record ice carousel is not over for organizers and volunteers who have put their hearts, souls, augers and chainsaws into the effort on Long Lake.

SINCLAIR, Maine — The bid to create a world record ice carousel is not over for organizers and volunteers who have put their hearts, souls, augers and chainsaws into the effort on Long Lake.

Nearly 100 volunteers turned out over three days in March to cut, dig and shovel ice chunks out of the lake in an attempt to create the largest ice carousel ever, and they were nearly successful. 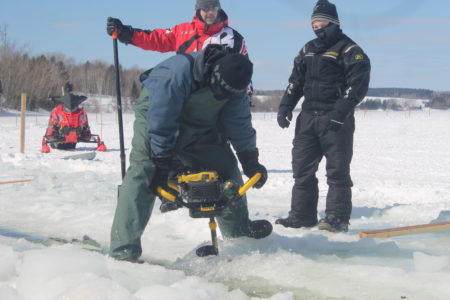 A volunteer works with an auger to cut into the ice on Long Lake on Sunday in an attempt to create a world record sized ice carousel. (Jessica Potila | SJVT/FhF)

The volunteers managed to cut a 426.5-foot diameter circle in the Long Lake ice. Some estimated that the huge chunk of ice, 30-inches or more thick, weighed between 10,000 and 11,000 tons, or 20-22 million pounds. The crews weren’t able to get the free floating ice chunk to spin more than six inches, however, before the extreme cold caused edges of the carousel to refreeze in places.

Armed with the knowledge they acquired that weekend and in anticipation of warmer temperatures, enthusiastic volunteers will return to Long Lake on the weekend of April 6-8 to try again.

There also will be a free hot dog roast on Sunday for members of the public interested in viewing the carousel, whether it gets spinning or not.

Snowmobile Northern Maine is hosting the event, which also serves as a fundraiser for the Aroostook County Meals on Wheels program, which provides local senior citizens with meals delivered to their homes.

“The ice carousel has been like a magnet of positive energy,” said Mike Cyr of Snowmobile Northern Maine. “It is the result of teamwork and people coming together creating something from nothing which makes everybody feel good, and all along the way, we’re helping our seniors to put a hot meal on their plate; it’s a win-win for everyone.”

Cyr is calling on volunteers to return this weekend to the site of the ice carousel, located about 100 yards from the Long Lake Sporting Club.

“We’re asking everybody with an operable outboard motor to have it available at the site next week,” said Cyr, who hopes to have enough horsepower to turn the carousel to make it official this time. 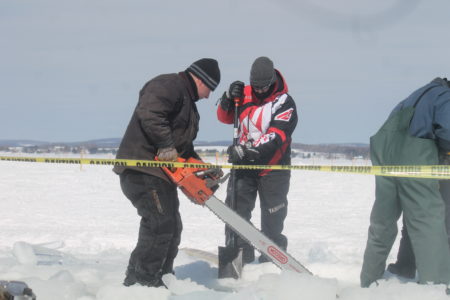 A volunteer uses a gigantic chainsaw to cut through the ice on Long Lake on Sunday in an attempt to create a world record sized ice carousel. (Jessica Potila | SJVT/FhF)

He also is asking for more volunteers with ice augers and chainsaws with 36-inch bars to help cut through the lake ice. As of Friday, March 30, the ice was still 28-31 inches thick.

“We’re hoping to have a fun event and something that brings the community together,” said Cyr. “This not only puts Sinclair, Long Lake, the St. John Valley and Aroostook County on the map, it actually puts the whole state of Maine on the map.”

The world record attempt has gained international attention, according to Cyr.

“In Finland they are watching us very closely,” Cyr said. The town of Lohja, Finland, currently holds the ice carousel world record of 122 meters, or about 400.2 feet, in diameter. Cyr said the ice in the lake there was about 16-inches thick when the Finns created their record carousel in February.

An organizer of the Finland ice carousel, Janne Kapylehto, recently contacted Cyr and offered encouragement to the northern Maine crew, he said.

“We’re in friendly competition now,” Cyr said. “They’re wishing us all the best and it’s nice to see.” 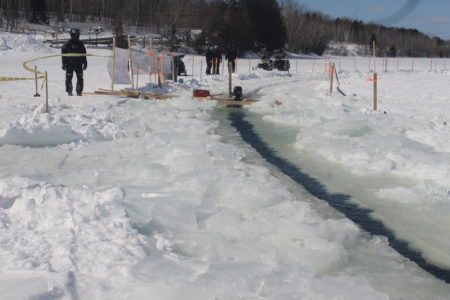 Over the weekend, volunteers cut a circle 426.5 feet in diameter in the ice of Long Lake in an attempt to create a world record ice carousel. (Jessica Potila | SJVT/FhF)

With permission from Sargent Corp. owners, Raymond traveled to Fort Kent last Thursday hauling a ledge trencher which the company loaned for the cause. Raymond volunteered his time to cut through 1,150-feet along of the ice carousel’s frozen perimeter. That will leave about 200 feet of perimeter which will need to be cut through by hand this weekend, Cyr said.

Cyr added that they intentionally left the carousel partially frozen in place so that the chunk of ice would not shift before volunteers could return to it this weekend.

“I’m from Fort Kent and I know all those guys (working on the carousel), Raymond said of his motivation. “I saw they were having a difficult time and wanted to help out if I could. It’s kind of a cool thing they’re doing and I thought it was very interesting and it’s for a good cause.”

Spencer Caron of Northern Maine Surveyors, which Cyr owns and operates, guided Raymond with GPS technology during the effort.

Cyr stressed that the teamwork involved by volunteers who took part in cutting out the original ice carousel was not lost, but rather served a great purpose in helping Raymond to cut through the ice with his trench ledger.

“We thank all of the auger operators who donated their time. Without the 1,340 auger holes drilled in that perimeter, without that team effort, we would not be where we are today,” he said. “The work that was done [March 16-18] was very critical in (Raymond) being able to reopen what he did, and had that work not been done, there was no way he could have gone around that perimeter and done what he did.”

Raffle tickets for $5 each have been sold since the ice carousel efforts began with all proceeds going to support Aroostook Meals on Wheels. There are 50 prizes being offered by area businesses. Tickets also will be available at the Long Lake Sporting Club this weekend and the prizes will be raffled off on Sunday at 2 p.m.

“No expenses are being paid from any donations that we make,” Cyr said. “All the expenses incurred are being absorbed by the volunteers and donors who are working for the cause.”

Volunteers will begin working on the carousel at 9 a.m. on Friday, April 6, and work throughout the weekend. The hot dog roast will take place on Sunday beginning at 11 a.m. outside the Long Lake Sporting Club.

More information about the ice carousel efforts, including additional photos and video, are available at the Snowmobile Northern Maine Facebook page.