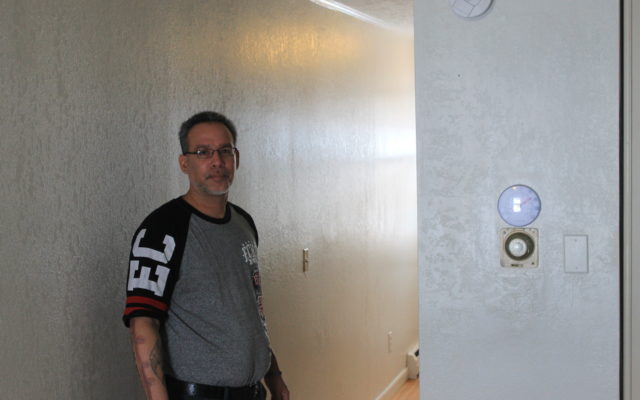 Anthony Brino • April 4, 2018
Eric and Elizabeth Marcan said they’re being generously welcomed into the Madawaska community as they try to start anew after leaving Puerto Rico in the wake of last year’s devastating hurricane.

MADAWASKA, Maine — Eric and Elizabeth Marcan said they’re being generously welcomed into the Madawaska community as they try to start anew after leaving Puerto Rico in the wake of last year’s devastating hurricane.

The couple left their home in Bayamon, Puerto Rico, last November after Hurricane Maria destroyed thousands of homes, infrastructure and the power grid on the island.

They found their way to Madawaska through a friend who’s lived in the town for five years and spent a few months living at their friend’s apartment until the landlord required them to leave under a lease prohibiting additional long-term inhabitants.

The Marcans spent about a month at the Sister Mary O’Donnell Emergency Homeless Shelter in Presque Isle and then in March, with the help of the Aroostook County Action Program, moved into an apartment in Madawaska.

Since then, they’ve been settling into their new home and the community. Eric has been helping work at his friend’s tattoo parlor while Elizabeth looks for employment options.

And they’ve received an outpouring of generosity from parishioners and leaders at St. Thomas Catholic Church and other community members.

Eric said the church donated furniture, while parishioners and other community members have donated everything from a bedroom set to a washer and dryer.

“This has been wonderful,” Eric said.

Heidi Rackliffe, the ACAP family coach who worked with the Marcans, said that she was planning to help them furnish the apartment but was pleasantly surprised to find out they had already done so with the help of locals.

“The County has some amazing people and this isn’t the only story that demonstrates the kindness folks portray,” Rackliffe said.

With a furnished apartment and the warming days of spring, Eric said he and Elizabeth are now looking to the future: enjoying mild summers, meeting people in the community and recruiting some relatives and friends to live and work in the area. Eric said that they’re in touch with three families who are considering moving to Madawaska.

By the end of the year, an estimated 200,000 Puerto Ricans will have left the U.S. island since the hurricane landed Sept. 20, 2017, according to government estimates cited by the Washington Post. Those islanders, representing a significant portion of Puerto Rico’s 3.3 million population, are moving to places like Florida, New York, Texas, and New England states.

Eric said he and Elizabeth are so far doing good getting acquainted with the St. John Valley.

“We’re adapting to the new elements and culture change. We’re ready for it to get warm so we can go fishing.”

Maine is more than eight months into Medicaid expansion under the federal Affordable Care Act and trends around who is enrolling and where they live are starting to emerge, bucking some expectations and pointing out access challenges.
Apex Weather END_OF_DOCUMENT_TOKEN_TO_BE_REPLACED

Low pressure will track into the Atlantic from off the Southeast coast tonight into Thursday with increased cloudiness this evening into the overnight hours.
Campaign Corner END_OF_DOCUMENT_TOKEN_TO_BE_REPLACED

Democratic presidential candidate Mike Bloomberg’s campaign will host 25 events in Maine this Saturday and Sunday as part of a nationwide “Weekend of Action” to engage supporters and build on the momentum of the campaign.
Our Sponsors END_OF_DOCUMENT_TOKEN_TO_BE_REPLACED