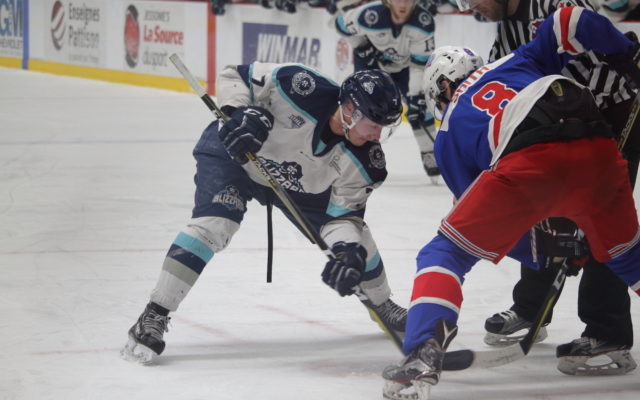 Contributed • April 1, 2018
Chris Chaddock capitalized on a defensive mistake to score the winning goal at 19:08 of the third period giving the Summerside Western Capitals a 5-4 win in the series opener of the best of seven EastLink North Division finals of the Maritime Junior Hockey League (MHL) on Saturday night, March 31, at the Jean-Daigle Centre in Edmundston.

EDMUNDSTON, New Brunswick – Chris Chaddock capitalized on a defensive mistake to score the winning goal at 19:08 of the third period giving the Summerside Western Capitals a 5-4 win in the series opener of the best of seven EastLink North Division finals of the Maritime Junior Hockey League (MHL) on Saturday night, March 31, at the Jean-Daigle Centre in Edmundston.

Unlike the four games of the previous series, the Edmundston Blizzard put a lot of pressure from the start of the first period, scoring the first goal from Liam Leonard, at 9:20. Cam Roberts tied the game at 15:05. The Blizzard outshot the Capitals 20-5.

The Blizzard continued its run in the second frame with two quick goals at 7:39 (Vincent Rioux) and 9:03 (Leonard’s second goal). The visitors replied at 9:58 and 13:47 with the goals of Brodie MacArthur and Jesse Annear. Both teams were tied 3-3 after 40 minutes.

The Blizzard took back the lead at 4:16 of the third tanks to Gabriel Vanier. Then, at 9:45, MacArthur got his second marker of the night to tie it up. Chaddock’s goal in the last minute had a chilling effect on the record crowd of 2,803 noisy spectators. It was the only time the Western Capitals took the lead in the game.

MacArthur scored twice on the power play. The two teams clash again on Easter Sunday at 7:30 pm at the Jean-Daigle Centre. Ryan Salvis’ squad will have to be more disciplined and avoid the penalty box against the league’s best power play team this season.

The game was very intense and the spectators remained at the tip of their seats for the entire evening. Observers were predicting a very close series and everyone had a great show on Saturday night.

As the Maine Turnpike expects 1 million travelers alone over the Labor Day weekend, policymakers are gearing up for a sprint to solve one of the state’s most intractable problems: a long-standing — and growing — transportation funding gap.
Apex Weather END_OF_DOCUMENT_TOKEN_TO_BE_REPLACED

Low pressure will move towards the Northeast from a low pressure over the Ohio Valley/Pennsylvania region this evening with the primary low tracking into Québec tomorrow.
Campaign Corner END_OF_DOCUMENT_TOKEN_TO_BE_REPLACED

U.S. Senator Angus King (I-Maine) today visited with students at the University of Maine at Fort Kent (UMFK) to discuss his work in Maine and Washington and answer questions from students.
Our Sponsors END_OF_DOCUMENT_TOKEN_TO_BE_REPLACED