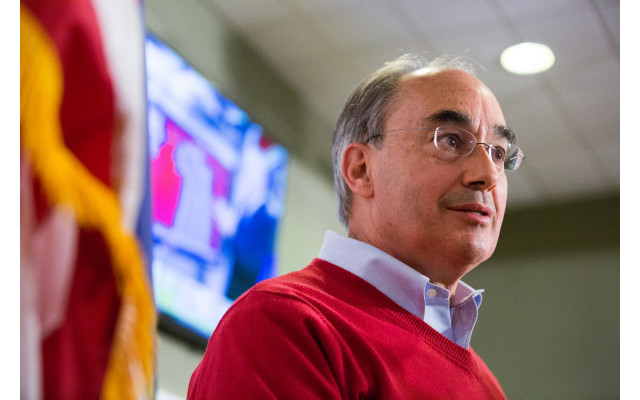 Michael Shepherd, BDN Staff • March 20, 2018
Residency may again be an issue in Maine’s 2nd Congressional District. U.S. Rep. Bruce Poliquin sold his in-district home in January, but his political adviser says he’s still living in an apartment there under a rental agreement.

Good morning from Augusta. Residency may again be an issue in Maine’s 2nd Congressional District. U.S. Rep. Bruce Poliquin sold his in-district home in January, but his political adviser says he’s still living in an apartment there under a rental agreement.

Poliquin moved into the family home before his first run for Congress and it was a major campaign issue. The Republican and Waterville native lived in an oceanside home in coastal Georgetown in the 1st District before his first run for Congress in 2014. He still owns that home — which is valued at $3.4 million by the town — but he registered to vote from the family home in Oakland along Messalonskee Lake in 2013.

His residence in the district was a major issue in the 2014 primary for the 2nd District seat against former Maine Senate President Kevin Raye, but he overcame it and it was talked about less and less in his 2014 and 2016 general election campaigns against Democrat Emily Cain.

He was planning to look for a new home after selling this one, but he has a lease now. The Morning Sentinel reported last year that Poliquin’s home was on the market and a spokesman said he was looking to downsize and find another home in the area. However, he sold it in early January to a Winslow couple, according to the deed.

On Monday, Poliquin adviser Brent Littlefield said the congressman negotiated a rental agreement with the home’s new owners that allows him to keep using an apartment on the property. He registered for the ballot from his campaign’s post office box.

It may be an issue again as four Democrats vie to replace him in 2018. The four-person Democratic primary is wide open, with conservationist Lucas St. Clair, Assistant House Majority Leader Jared Golden, builder Jonathan Fulfordand bookseller Craig Olson on the ballot and looking to distinguish themselves. (St. Clair moved from Portland to Hampden after declaring for the race.)

It will be a nationally targeted race for the third straight cycle, with Democrats leading generic congressional polls by wide margins now. But the 2nd District has taken a conservative turn since Poliquin first won it in 2014 and any Democrat will likely have a hard time beating him.

A warm front will approach the Valley today and cross the region this evening.
Campaign Corner END_OF_DOCUMENT_TOKEN_TO_BE_REPLACED

Dale Crafts filed his nomination papers for Feb. 21 with the Secretary of State to officially be placed on the primary ballot on June 9, 2020, for the U.S. House of Representatives 2nd District race.
Our Sponsors END_OF_DOCUMENT_TOKEN_TO_BE_REPLACED