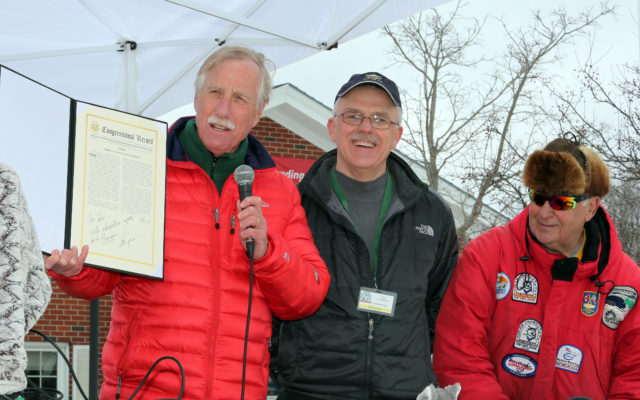 What made it unlike any other day is that Guimond was completing the last day of a distinguished career as Fort Kent town manager.

Guimond, who has served nearly 25 years in the position, offered his letter of resignation to the Fort Kent Town Council in January.

Among those who trailed into Guimond’s office seeking last bits of advice from their boss and mentor on Thursday was Public Works Director Tony Theriault.

“Don is like, he’s a wealth of knowledge. He can pretty much answer just about anything you ask, so take advantage of it while it’s there. I guess I’ve been doing that to him for the last three weeks,” Theriault said. “He would be like talking to, if you were in the legal field, talking to one of the justices on the Supreme Court. He’s that high up there as far as legal, business, government; he knows everything.”

Steve Pelletier, Fort Kent director of planning and economic development, said Guimond made clear to all town employees his eagerness to make the transition as smooth as possible for them. 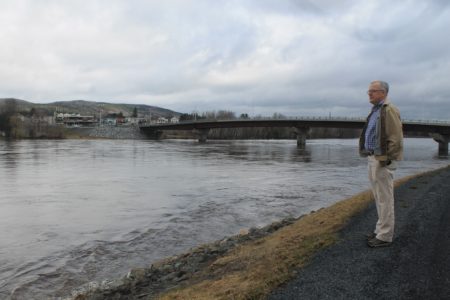 Fort Kent town manager Don Guimond looks over the St. John River in 2017. Town employees included this photo when dedicating the Town of Fort Kent Annual Report to Guimond, who served as town manager for nearly 25 years until stepping down on March 15. (Jessica Potila | SJVT/FhF)

“He wanted to be sure he answered all questions and took care of each department’s needs before he left,” Pelletier said. “From the moment he submitted his letter of resignation, he has been trying to think of anything he could do to make his absence easier on the workers.”

The employees of Fort Kent came together to dedicate the latest Town of Fort Kent Annual Report to Guimond, with words of praise added on their behalf by Mark Soucy, Fort Kent Water and Wastewater department head.

“Your professionalism, integrity and knowledge are second to none and have seen us through good times and bad times … your guidance has been unquestionably the greatest and has kept us all on the right track at work and in life. Your presence here will be felt for many years to come,” Soucy wrote in the dedication.

Leaders outside of town government also have expressed their appreciation for Guimond. Beurmond Banville, who served as president of the Can-Am Crown International Sled Dog Races for many years, said that Guimond impressed him as a Can-Am volunteer, as well as for all he has given to the community for nearly a quarter of a century.

“He is the calming voice in calamities at the town level, and does the same on other boards where he represents the residents of the town,” Banville said. “For Can-Am, he has been at the start and finishing lines from the start. He is just one of those individuals who does not stop giving. He is the epitome of being there when a situation occurs.” 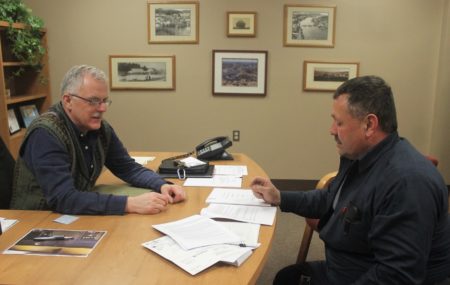 Guimond’s work ethic and willingness to help others has also earned him respect from entities outside the St. John Valley.

The Small Business Administration awarded Guimond the Phoenix Award for Outstanding Contributions to Disaster Recovery by a Public Official at a ceremony in Washington, D.C, in 2009 for his life-saving efforts during the Fort Kent flood of 2008.

Guimond literally knocked on doors to warn residents to evacuate as flood waters rose and he coordinated efforts between local and federal agencies to provide assistance to those affected by the flood.

U.S Sen. Angus King also presented Guimond a statement this year honoring him for his service as town manager of Fort Kent and had it entered into the Congressional Record.

“Don is a remarkable public servant, mentor, and individual who has truly led by example,” King said in the statement. “His inclusive leadership style has cultivated a community that is now the envy of many communities throughout the state of Maine.”

Guimond is humble about his achievements and explained why he devoted nearly 25 years of his life to serving the town of Fort Kent.

“For me it wasn’t just about a job, it was my community, my friends, my family,” he said.

He credits his family for much of his success.

“Family is the most important thing in life. I would not have been able to do this job without their help and understanding,” Guimond said. “I did my best not to burden them with my work, but having family around to bring some normalcy to my life during trying times is what gave me the energy to serve the citizens of Fort Kent.”

Now that his duties as Fort Kent town manager are complete, Guimond, who is co-owner of Guimond Farms, a family owned beef cattle farm in Fort Kent, said he he is looking forward to calving season on the farm this spring. He said he also is looking forward to spending time with his many beloved nieces and nephews.

Guimond said he might embark on some new adventures now that he has some free time. He said that in late summer or early fall he may take a road trip across the United States. He’s also inclined to visit a Canadian town he’s heard about — Fort Kent, Alberta.

A broad area of low pressure crossing the state will bring widespread rainfall to the entire SJV today and tonight. Rain tapers to showers Thursday morning with showers lingering into the evening hours as the low lifts to the northeast.
Our Sponsors END_OF_DOCUMENT_TOKEN_TO_BE_REPLACED