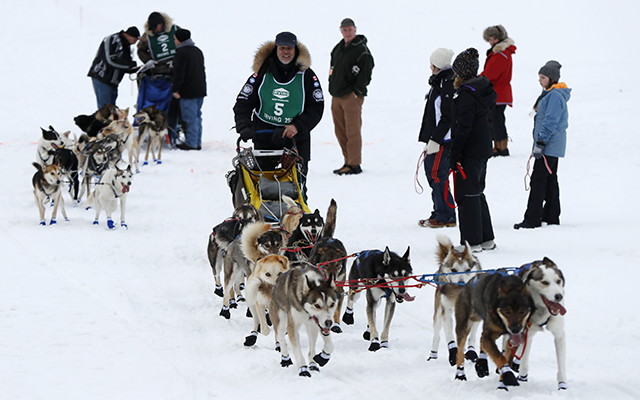 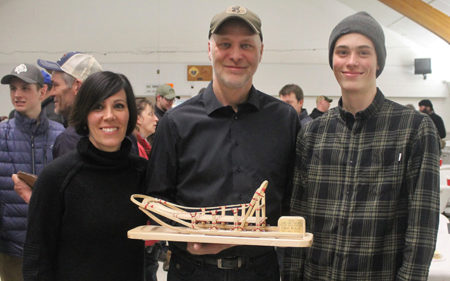 FORT KENT, Maine — Martin Massicotte, the St-Tite, Quebec, musher who won his fifth-straight and ninth overall Irving Woodlands Can-Am Crown 250 when he crossed the finish line at Lonesome Pine Trails early Monday morning, said on Tuesday that he will return next year to defend his title.

When he was introduced at the start of the Can-Am Crown International Sled Dog Races on Saturday, organizers had indicated that Massicotte would be in Alaska at this time next year competing in the Iditarod.

While accepting his trophy during the Can-Am 250 volunteer banquet and awards ceremony at the Knights of Columbus Hall in Fort Kent, however, he said, “I will be back next year.”

The audience of Can-Am volunteers and mushers cheered at the announcement that he would be back seeking his 10th victory. Massicotte’s partner, Marie-Josee Dulong, explained later Wednesday that he is waiting for his dogs to have more race experience before he attempts the 1,000-mile Iditarod. She said his current team of dogs are still young at an average age of 2 ½ years. 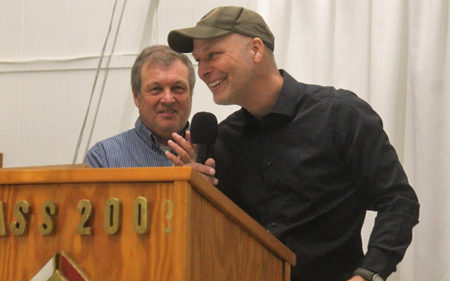 Nine-time Can-Am Crown 250 champion Martin Massicotte of Quebec speaks to an audience at an awards banquet while Can-Am president Dennis Cyr looks on, on Tuesday, March 6. Massicotte told the crowd he will return to the Can-Am Crown International Sled Dog Races to defend his title in 2019. (Jessica Potila)

On Tuesday night, the champion musher thanked his team of sled dogs “for their extreme dedication,” and the family of Luann and Kevin Ouellette of Fort Kent, who have hosted Massicotte and his family for 15 years.

“They are always there to support me and encourage me,” Massicotte said of the Ouellettes.

Massicotte also thanked his partner, Marie-Josee Dulong, as well as the couple’s 16-year-old son and fellow musher, Etienne Massicotte, “for all his gracious help.”

Massicotte drew much applause again from the audience of Can-Am volunteers and mushers when he said he would like to highlight the achievement of two young Can-Am mushers — his son Etienne, 16, and Tristan Longchamps, 15, the son of third-place Can-Am 250 finisher Andrew Longchamps.

The elder Massicotte also praised the volunteers, race marshals, veterinarians and others who contributed to the Can-Am Crown International Sled Dog Races, which feature 30-, 100-, and 250-mile events.

Can-Am 250 musher Dylan Harris of Utah also spoke at the banquet while accepting an award for his fifth-place finish in that race. 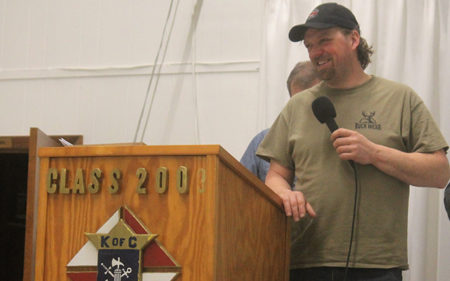 Musher Denis Tremblay of Quebec speaks at a Can-Am 250 awards banquet on Tuesday, March 6. Tremblay and his team of sled dogs took second place in the race this year. (Jessica Potila)

“This is an amazing community you guys have here; you don’t see communities like this much anymore,” Harris said of northern Maine.

Musher Katherine Langlais of New Brunswick recounted a harrowing experience she had while competing in her first Can-Am 250 race this year, one which signifies the close-knit nature of the mushing community.

Langlais said she thought about dropping out of the race when she had difficulty controlling her lead dog about two miles into the fourth leg of the race.

Langlais said mushers Amy Dionne of St. David and Yann Shaw of Quebec came to her aid and encouraged them to follow her along the trail.

Then, about 10 miles out of the Camp Syl-ver checkpoint, Langlais said she began to feel hazy, vomited, and fainted on the trail.

“Yann turned around to come get me,” Langlais said. “If it wasn’t for Yann, I would probably still be out there.”

Langlais was able to complete the race, finishing in ninth-place out of the 13 competitors in the signature Can-Am race. Shaw and Dionne wound up in seventh and eighth respectively. Three other mushers in the race did drop out. 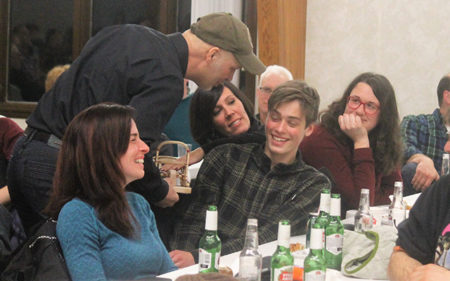 Also at the banquet, Can-Am president Dennis Cyr thanked many Can-Am volunteers for their dedicated service to the event.

“Everyone here is critical to this race. You all do such a great job,” Cyr said.

Pesut has been volunteering his veterinarian services with Can-Am for all 26 years of its existence.

“He’s a man that if something needs to be done, he’ll do it,” Cyr said.

Cyr said he hopes that Guimond will still volunteer for Can-Am next year, when he is no longer town manager.

“I will always be part of the Can-Am,” Guimond said.

Doug Cyr shared encouraging words about the future of the races.

“Mr. Irving has committed to another year (of sponsorship),” Cyr said.

Maine’s longest serving legislator, Martin was first elected to the Maine House of Representatives in 1964 when he was 23.
Our Sponsors END_OF_DOCUMENT_TOKEN_TO_BE_REPLACED