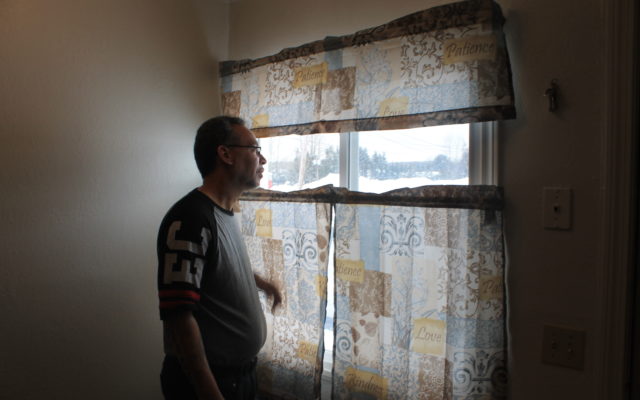 MADAWASKA, Maine — Displaced by Hurricane Maria in Puerto Rico, Eric and Elizabeth Marcan are making a new life in Madawaska.

“To get started all over, it feels good,” Eric Marcan said. “With the hurricane, things got so bad we lost everything.”

On the first of March, the Marcans moved into their own apartment in Madawaska with the help of the Aroostook County Action Program, after about a month staying at the Sister Mary O’Donnell Emergency Homeless Shelter in Presque Isle.

The couple left Puerto Rico last November, following more than two months without electricity and extensive damage to their rental home in Bayamon, a municipality in the San Juan metropolitan area.

A friend of theirs who has lived in Madawaska for five years sold them on the idea of living in the United States’ northeastern-most town, and they spent a few months living at the friend’s apartment until the landlord required them to leave, citing a provision on the lease prohibiting additional long-term inhabitants. 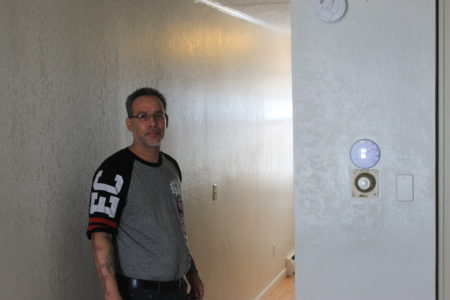 Eric Marcan and his wife Elizabeth, who did not want to be photographed, are settling into a new apartment in Madawaska, where they joined a friend after Hurricane Maria devastated their home in Puerto Rico. (Anthony Brino | Star-Herald)

Heidi Rackliffe, an ACAP family coach and social worker, worked with the Marcans to secure an apartment. She helps a range of people find solutions to housing and employment situations.

“A lot of our work goes into preventing homelessness,” Rackliffe said. “We focus on helping people become self-sufficient.”

With spring around the corner, the Marcans are now settling into their new apartment and getting to know the St. John Valley.

“I want to see the way Madawaska is. I want to get out. I like fishing,” Marcan said.

The Marcans have spent most of their lives in Puerto Rico, an island of 3.4 million people that is governed as a Commonwealth and an unincorporated territory of the United States. Puerto Ricans are natural-born U.S. citizens and many have for years lived and worked in New England and other regions of America amid economic turndowns on the island.

Since the hurricane landed Sept. 20, more than 168,000 Puerto Ricans left the island and entered Florida, according to the Florida state government. Many have stayed in Florida, where there are many long-established Puerto Rican communities, while others have sought employment and housing in other regions.

Marcan said he and Elizabeth thought about relocating to the Virginia area, where his father and sister moved after the hurricane, but their friend in Madawaska convinced them they would enjoy life in the St. John Valley.

“There’s a lot of snow,” Marcan said, referring to the warnings he received about northern Maine. He spent time living and working in the New York City area, but had never experienced a long, cold winter before.

Despite the climate shock of extended winter, the Marcans are doing well. The days after their move into the new apartment brought relatively warm weather.

“I was just happy walking in the sun,” he said. “We definitely want to see how it is in the summer. A lot of people are telling me it’s warm, but it’s not Puerto Rican weather.”

Already, Eric Marcan said his Crohn’s disease, an inflammatory digestive condition, is under better control with the medications he can access at Northern Maine Medical Center in Fort Kent. Following the trauma of the hurricane, the couple is happy to be able to stay somewhere safe.

“I never went through this. It was a bad experience and I don’t want to go through it again,” Marcan said. “The hurricane destroyed the economy. There’s still places that have no electricity and are not getting proper care, medicine or food. If I go back to Puerto Rico, I think I’ll probably just go for vacation. It’s going to have to be years for me to say, OK, I want to go back to stay in Puerto Rico.”

A few of the Marcans’ friends and family members are planning to visit them this summer in Madawaska and may also consider relocating to northern Maine, Eric Marcan said.

“People are real nice here. They greet you in the morning. It’s welcoming,” Marcan said.

Maine is more than eight months into Medicaid expansion under the federal Affordable Care Act and trends around who is enrolling and where they live are starting to emerge, bucking some expectations and pointing out access challenges.
Apex Weather END_OF_DOCUMENT_TOKEN_TO_BE_REPLACED

Low pressure will track into the Atlantic from off the Southeast coast tonight into Thursday with increased cloudiness this evening into the overnight hours.
Campaign Corner END_OF_DOCUMENT_TOKEN_TO_BE_REPLACED

Democratic presidential candidate Mike Bloomberg’s campaign will host 25 events in Maine this Saturday and Sunday as part of a nationwide “Weekend of Action” to engage supporters and build on the momentum of the campaign.
Our Sponsors END_OF_DOCUMENT_TOKEN_TO_BE_REPLACED