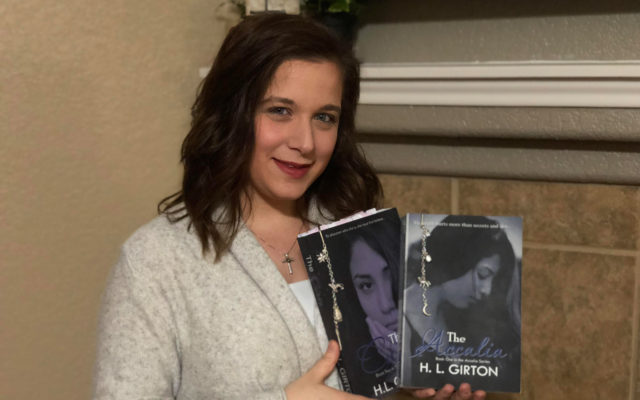 ST. JOHN VALLEY — After tragedy struck Heather (Lausier) Girton in 2010, she eventually found solace in writing a fictionalized account of her ordeal. That outlet has since grown into a career as a self-published author, and the St. John Valley native recently released the second book in her “Accalia” series.

The paranormal collection, which follows young Genesis Berkeley as she discovers secrets about her family and her past, started with “The Accalia,” released in August 2017. Book two, “The Curse,” was released at the end of January.

Prior to delving into novel-length fiction, the 2006 Fort Kent Community High School graduate had mainly written poems and creative short stories. Writing had always been as much an emotional outlet for her as a creative one.

“My childhood was not easy,” Girton, 30, said via telephone Tuesday, Feb. 27, from her home near Houston, Texas. “It was complicated.”

Writing became her coping tool, though she rarely shared her writings with others.

When she was a young mother, Girton’s ability to find peace through writing served her during a particularly dark time.

Her second child, Clinton Jr,. died unexpectedly in May 2010. The loss of her son, who was less than one year old, devastated Girton.

Her husband, Clinton, was deployed in Iraq with the U.S. Army at the time and Girton was alone with her young daughter at the family’s home at Fort Riley, Kansas.

“I was in a severe depression,” Girton said. “It was one of the hardest things I’ve ever had to cope with.”

Family and friends, aware of Girton’s passion for writing, encouraged her to take pen in hand as a way to help begin the healing process.

“So I wrote his story,” Girton said, referring to the unpublished story she wrote about her son. “It was a fictionalized version, but it’s about him.”

Girton said she is unsure if she will ever be ready to publish Clinton Jr.’s story, but some of her family have read it.

Her husband, who is now retired from the military after serving 10 years, then encouraged Girton to further explore writing as a new career and creative outlet.

Girton said writing the “Accalia” series allows her not only to have fun writing fantasy novels for young adults, but also gives her a place to explore values and morals.

“It’s about one girl coming of age,” Girton said. “So it has the usual teen struggles about confusion, loss and questioning who you are.”

In this case, the main character has special powers related to werewolves and shape shifting, so it’s a bit more complicated than the average teen angst book. Even so, Girton said the characters and story are accessible to all readers, and the story is a departure from most mainstream books in the genre.

“For me it allows me to connect with my daughters,” said Girton, who now has three daughters, ranging in age from 5 to 10 years.

Even though the story has elements of mythology and fantasy, it explores the themes of family structure and interpersonal dynamics, the author said.

Girton said her study of psychology and sociology in college, along with her own personal experiences, have helped her weave these themes into her fiction.

“A lot of my studies are based around family,” she said. “I am finding I can put a lot of that into these books.”

The story takes place in the present day, in a world populated by people possessing special gifts and abilities. Girton said she is planning a four-novel “Accalia” series, with other ideas for related short stories and perhaps a prequel someday.

After researching options about how to get her first novel to the public, Girton opted to self-publish, as it gave her more creative freedom.

“It ended up being more work than I thought,” Girton added with a chuckle.

Girton’s books are available through Amazon, in both print and electronic versions, and through several other digital outlets. Fans may also request a hard copy through her website.

The author said she is not expecting to become wealthy from her creative efforts. Rather, she is enjoying the fun and challenge of writing the stories and wants to share them, something she had been reluctant to do years ago when her writing served more of a therapeutic role.

To learn more about Girton’s works, visit her website at https://www.authorhlgirton.com.

Joseph E. BeckSpecial to the Fiddlehead Focus5 days ago

Short-Term Outlook: Wednesday - Friday Cloudy to mostly cloudy skies are expected over Fort Kent and surrounding areas today as a warm front lifts across the region producing some isolated shower activity.  A cold front will approach and cross the Valley tonight and early Thursday with gusty south/southwest winds developing ahead of the front thanks to the pressure gradient.
Our Sponsors END_OF_DOCUMENT_TOKEN_TO_BE_REPLACED