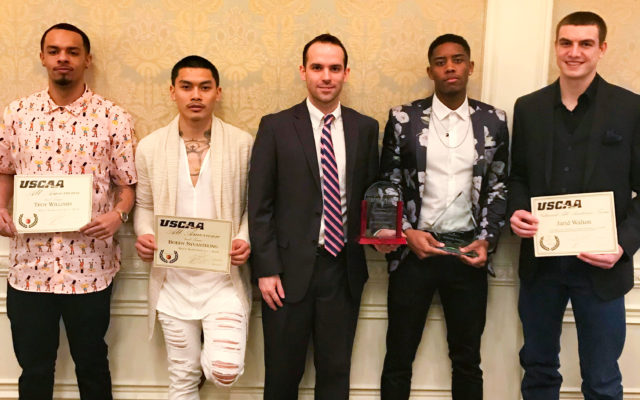 Knight, “one of the most efficient players in the USCAA”, as mentioned during the awards ceremony, won the first USCAA Player of the Year award for a UMFK basketball player, man or woman, according to a UMFK press release.

The senior swingman averaged 18.8 points per game, six rebounds a game and ranked third in the USCAA in total steals. Knight shot over 52 percent from the floor and 77 percent from the line this season, while also averaging three assists per game. He had ten 20-point games and three 30-point outings this year. 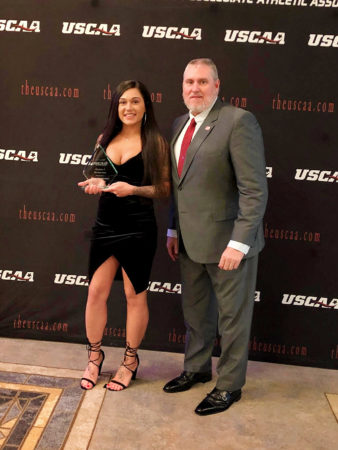 Knight, a first-year player from San Francisco, is the second First Team All-American to play for Coach Tom Bird (Joe McCloskey, 2014-2015). Knight and his fellow Bengals were scheduled to play Wednesday against Dean College in a rematch of the 2017 USCAA quarterfinal.

Savana Jankowski, a sophomore for the women’s Bengal hoops team who led the USCAA in scoring this season, averaging 19.5 points per game, also earned a spot as a First Team All-American. She was top 10 in the USCAA in eight total categories, including free throws made and steals, and was second in overall points with 430.

Jankowski and the Bengals were set to play Wednesday against second seeded Florida College in a USCAA Women’s Division I quarterfinal game.

Williams, a junior from Oregon, started 19 games in his first season as a Bengal. He shot 44 percent from the floor, including a team high 39 percent from long range. Williams is second on the team in points per game at 11.7.

Syvanthong, a senior guard, averages 8 points, 7.5 rebounds, 6.5 assists and 2.3 steals per game for the Bengals. He had five double-doubles on the season, including career highs of 16 rebounds and 13 assists in a December game at Vermont Technical College

Jarid Walton, a junior transfer, had a 4.0 GPA in his first semester as a Bengal and was named Academic All-American. Walton is a business major who averages 7.3 points a game, and has nine double figure scoring games this season.

Post-tropical cyclone Teddy is expected to cross Nova Scotia today and skirt the western shores of Newfoundland. Maine will experience little moisture from the storm.
Our Sponsors END_OF_DOCUMENT_TOKEN_TO_BE_REPLACED