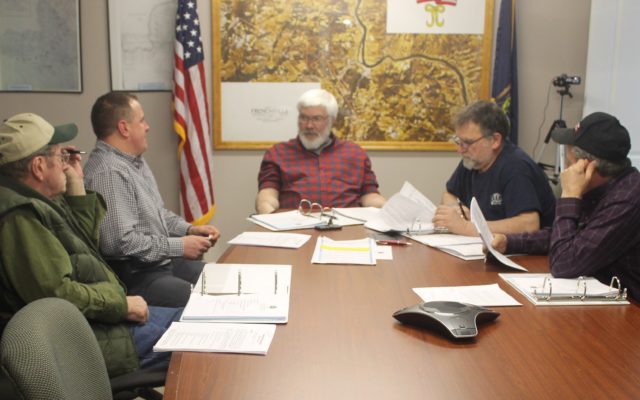 Jessica Potila, SJVT / FhF Staff Writer • March 1, 2018
The fate of a long disputed stretch of road in Frenchville remains uncertain despite a declaratory judgment a judge issued in January.

FRENCHVILLE, Maine — The fate of a long disputed stretch of road in Frenchville remains uncertain despite a declaratory judgment a judge issued in January.

After more than a year of legal wrangling between Frenchville town officials and several residents involving ownership and responsibility for the maintenance of Pelletier Avenue, Caribou Superior Court Justice Harold Stewart II signed off on a settlement agreement in January declaring Pelletier Avenue a “public way.”

Members of the Frenchville Board of Selectmen voted unanimously at a public meeting on Tuesday to authorize Town Manager Ryan E. Pelletier to pursue legal advice from a new attorney for further clarification of the town’s legal options pursuant to the judgment. Presque Isle attorney Richard Currier previously represented the town on the matter.

The selectmen also said they believe attorneys involved in the case erroneously led Justice Stewart to believe that residents of the town were largely behind the concept of declaring Pelletier Avenue a public way.

Selectman Yvon Dube said he thought the judge might have been coaxed into thinking everybody was on board.

Calvin Ouellette sued the town of Frenchville in October 2016 in an effort to stop the town’s paving and related maintenance of a section of the road that he claimed was private property owned by his family. The inhabitants of the town are listed as defendants in the case, with Pelletier Avenue residents John and Ann Ezzy included as intervenors, claiming the road as public.

The Jan. 16 declaratory judgment issued by Stewart confirms a settlement agreement that had been reached last summer between Ouellette and the Town of Frenchville.

The declaratory judgment stipulates that Ouellette and the town agree that Pelletier Avenue is a “a public way, without limitation on its use by the public, including paving and maintenance thereof.”

Ezzy said in January that his attorney, Bangor-based Ed Bearor, advised him that if any party refuses to abide by the declaratory judgment, that party would be held in contempt of court.

At Tuesday’s public meeting, Pelletier shared with the board a copy of a freedom of access request Ezzy recently submitted to the town seeking additional information regarding the Pelletier Avenue dilemma.

Pelletier said it will take town employees approximately 20 hours to research the information and that the town will require Ezzy to pay $200 for the service.

“The town is tired of footing this bill,” Pelletier said in reference to expenses that have mounted in connection with the case.

Chairman Craig Lawrence told the board that now that Pelletier Avenue has been legally declared a public way, “if we don’t do work on the road, Ezzy can petition the county to do it and send us the bill.”

At a previous town meeting, Pelletier told selectmen he estimated it would cost the town as much as $2 million to finally complete the Pelleter Avenue project.

This includes the legal fees to secure easements or deeds from abutting landowners, surveying and engineering costs, purchasing land at fair market value if the town needed to use the eminent domain process, and the cost of actually doing the on-the-ground work, including possibly moving the road over by several feet.

“This continues to be a paper work disaster,” Pelletier said on Tuesday.

Earlier on Tuesday, Pelletier and Lawrence as well as town budget committee members Danny Pelletier and Jeremy Pelletier held a telephone conference with Maine Municipal Association attorney Michael Stultz to seek information about legal options which may be available to the town regarding the judgment.

Lawrence said Stultz advised the board to seek further advice from legal counsel on the matter.

Lawrence also said that information obtained from the meeting with Stultz bolstered his belief that the Superior Court ruling is an “illegitimate judgment. We don’t say it was illegal.”

He did not explain the distinction.

Pelletier planned to discuss the case with an attorney with the firm of Eaton Peabody out of Bangor, Maine later this week.

The upper-level low pressure area that has been parked over southern New England will continue to stall there today into the overnight period then begin to open up and shift southeast into the Atlantic Thursday.
Campaign Corner END_OF_DOCUMENT_TOKEN_TO_BE_REPLACED

Dale Crafts filed his nomination papers for Feb. 21 with the Secretary of State to officially be placed on the primary ballot on June 9, 2020, for the U.S. House of Representatives 2nd District race.
Our Sponsors END_OF_DOCUMENT_TOKEN_TO_BE_REPLACED