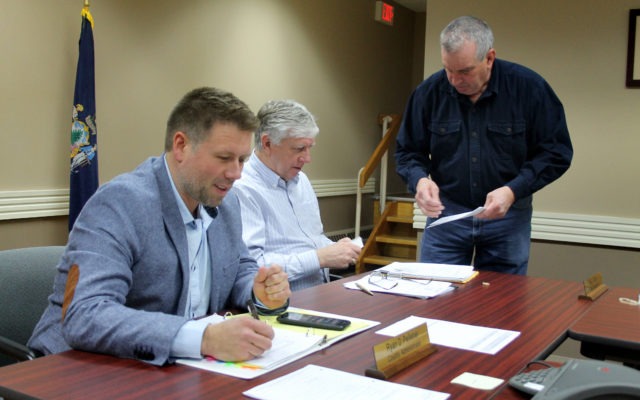 FORT KENT, Maine — County Commissioners at their recent meeting in Fort Kent tabled County Administrator Ryan D. Peletier’s suggested use of more than $34,000 from the county’s “undesignated fund balance,” preferring instead to run the proposed expenditures by the members of the county’s finance committee before approving them.

“I have no problem approving the amounts,” commissioner Norm Fournier said via telephone at the Feb. 21 meeting. “But, a memo should be sent to the budget committee.”

Fournier, along with commissioners Paul Underwood and Paul Adams, thought it better to solicit feedback from the finance committee, since the new expenditures were cut from the budget the committee had previously endorsed.

Pelletier said he anticipates an additional $125,000-$150,000 to be added to the existing approximately $750,000 undesignated fund balance, once this fiscal year closes.

He is proposing some of those monies be used to fund projects that were initially included, but then withdrawn from the current budget.

Those projects include $14,250 for a new law enforcement radio tower in the St. Francis/Allagash area and upgrades to the communication tower located on No. 9 Mountain in the Bridgewater/Blaine area. Both of these are used by the Aroostook County Sheriff’s Department.

Another $10,000 would be used for “economic development and advocacy,” according to Pelletier.

“To allow The County to engage in economic development activities that are determined to provide a meaningful impact to our region. It would further allow The County to engage in advocacy of initiatives that would create economic development in the region,” Pelletier wrote in a Feb. 27 memo to the members of the finance committee.

Pelletier also recommended transferring $10,000 into the Caribou Property Development Reserve account. Funds in that account are intended for projects related to the possible future expansion and development of county court facilities, including land acquisition.

In all, Peletier recommended transferring $34,250 from the undigested fund account to the specific projects.

Pelletier said he anticipates having feedback from the finance committee prior to the commissioners’ March 21 meeting in Caribou, when the commissioners can then vote on the recommendations.

In other county business Feb. 21, commissioners approved a change to the financial practices policy related to purchasing used equipment.

Pelletier told commissioners that some county departments often find used equipment that meets their needs and which cost less, and that there is no need for the RFP process in those cases.

Pelletier also updated commissioners on the results of a survey he sent out in the fall to Aroostook communities, inquiring about their expenses for providing property tax assessing and code enforcement services. This was done as part of an effort to explore the possibility of Aroostook County providing shared services in these fields.

Cumberland County already has a small arrangement with many of the southern Maine community in its area.

Randy Tarr, who has been contracting for many years with Aroostook communities to provide assessing services, may be retiring in the near future, Pelletier said.

“So, towns and the county should start planning now,” he said.

Pelletier said Cumberland charges towns a fee for the service, and is not funded by county tax assessments to the municipalities.

In order for such shared services to work in Aroostook, Pelleter said it would almost have to be an “every town or nothing” situation.

Caribou, Houlton and Presque Isle already have their own assessor on staff and Madawaska is considering hiring its own.

“A lot more conversation will have to occur,” prior to any shared services plan being put forward, Pelletier said.

Maine is more than eight months into Medicaid expansion under the federal Affordable Care Act and trends around who is enrolling and where they live are starting to emerge, bucking some expectations and pointing out access challenges.
Apex Weather END_OF_DOCUMENT_TOKEN_TO_BE_REPLACED

Low pressure will track into the Atlantic from off the Southeast coast tonight into Thursday with increased cloudiness this evening into the overnight hours.
Campaign Corner END_OF_DOCUMENT_TOKEN_TO_BE_REPLACED

Democratic presidential candidate Mike Bloomberg’s campaign will host 25 events in Maine this Saturday and Sunday as part of a nationwide “Weekend of Action” to engage supporters and build on the momentum of the campaign.
Our Sponsors END_OF_DOCUMENT_TOKEN_TO_BE_REPLACED