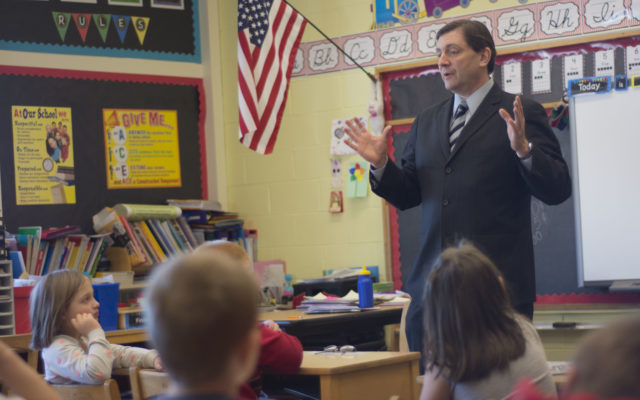 Chris Bouchard • February 4, 2018
District 1 Sen. Troy Jackson stopped by Connor Consolidated School last Friday to discuss the importance of getting involved in politics, and to answer questions from students.

CARIBOU, Maine — District 1 Sen. Troy Jackson stopped by Connor Consolidated School last Friday to discuss the importance of getting involved in politics, and to answer questions from students. 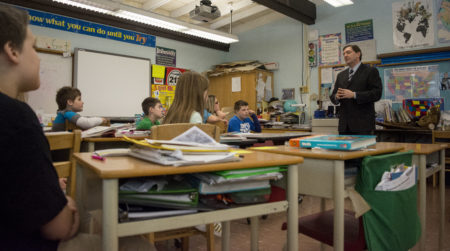 Connor Principal Heather Anderson said she sent Jackson an email and, within a week, he’d responded, saying he’d “love to come up.”

“And now he’s here,” she said. “It’s a good opportunity for the students, since they’re so far away from Augusta and don’t know what happens there.”

Anderson said she hopes students gain a better understanding of laws and how they are passed.

“I want students to know that laws don’t just come out of thin air,” she said. “Everyone has the power to make laws, and anyone can go to Augusta and be a representative, senator, or even the president of the United States.” 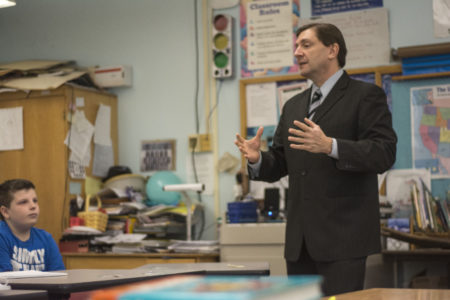 “It’s interesting you say that,” he said. “The trouble with Aroostook County is that it’s one of the biggest counties in the whole United States. You could fit both Connecticut and Rhode Island in Aroostook County, so that’s a lot of territory for our Department of Transportation to cover.”

He said that, while the DOT does a “really good job,” sometimes it’s not possible for them to cover every road in the County as “quickly as they probably want to.”

“I try to give them the benefit of the doubt,” the senator continued. “Sometimes I’ll call and gently remind them of an area that needs to be taken care of. There’s no doubt that if we could get more money in the transportation system, we could do a better job in not only plowing the roads, but maintaining them.”

Fourth-, fifth- and sixth-graders had a more advanced understanding of Jackson’s role in the state government, and many prepared questions for him. One of the older students asked about the difference between a representative and a senator.
Jackson said there is actually “very little” difference except for the amount of constituents.

“When I was in the House,” he said, “I had about 8,500 constituents, but as a senator you have closer to 40,000. I have half of Aroostook County in this Senate district, and The County is one of the biggest Senate districts in the entire nation.”

He said Portland, for example, has a much higher population and therefore has three senators within the city, while Aroostook County faces the opposite situation, with a large amount of land and a smaller number of people. 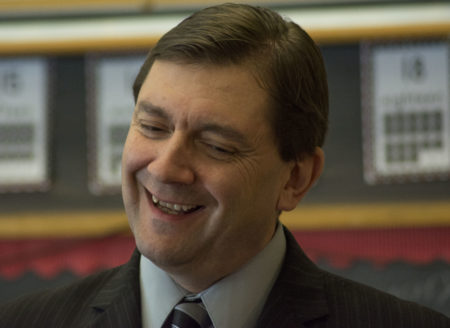 Another student asked if he had met President Donald Trump, which he said he had not at this point.

“I’ve never met the current president,” he said, “but I suspect there will be a time when I do. I’ve met Barack Obama a couple times, along with Senators King and Collins, and Representatives Poliquin and Pingree.”

In between class visits, Jackson said he hopes students walk away with the message that they have the power to get involved in their government and make a change in their community.

Jackson said he worked as a logger before getting involved with state politics.

“I’m a logger,” he said, “and that’s a noble profession with a lot of intelligent people, but I want people to understand that it doesn’t matter what your occupation is. We need loggers, farmers, teachers, and everyday folks to be a part of politics. And, to me, this visit is about impressing that.”

Some of the biggest issues facing Aroostook County now, according to Jackson, are a lack economic opportunities, education funding and the opiate epidemic.

“More economic opportunity could help a lot of these issues,” he said. With the opiate crisis, people often make bad decisions when they feel there is no hope. Property taxes are also getting out of line. I tried this past session to put more money in education so local property taxes wouldn’t have to pick up the share.”

He said he believes there is a great deal of pressure on taxpayers to keep schools open. “Augusta needs to step up and fund education at the required 55 percent, and we haven’t yet. That’s been a constant battle.”

Jackson recently spoke at a school in Madawaska, and said he enjoys having the opportunity to make an impact on local students.

“I never saw myself in a position where something I say could make a difference to someone else,” he said, adding that he takes seriously the opportunity to do so.

“We’re a long way from Augusta,” he continued. “I think sometimes event parents don’t understand that we can change things and these children, in the future, can do this job. No one should feel like it’s out of reach.”

As the Maine Turnpike expects 1 million travelers alone over the Labor Day weekend, policymakers are gearing up for a sprint to solve one of the state’s most intractable problems: a long-standing — and growing — transportation funding gap.
Apex Weather END_OF_DOCUMENT_TOKEN_TO_BE_REPLACED

Low pressure will move towards the Northeast from a low pressure over the Ohio Valley/Pennsylvania region this evening with the primary low tracking into Québec tomorrow.
Campaign Corner END_OF_DOCUMENT_TOKEN_TO_BE_REPLACED

U.S. Senator Angus King (I-Maine) today visited with students at the University of Maine at Fort Kent (UMFK) to discuss his work in Maine and Washington and answer questions from students.
Our Sponsors END_OF_DOCUMENT_TOKEN_TO_BE_REPLACED