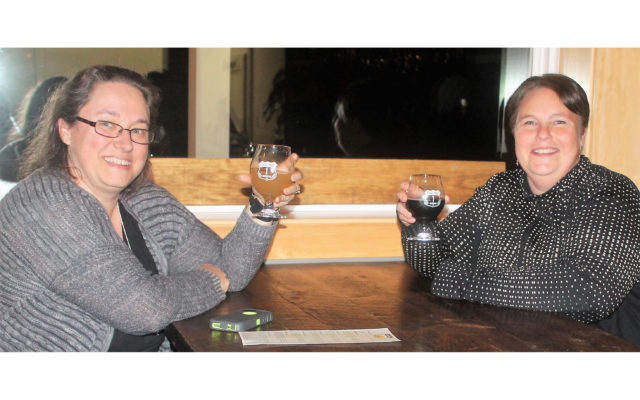 FORT KENT, Maine — An evening out for old friends Jill Cairns and Melanie Hartt proved relaxing and fun at First Mile Brewing Co. in Fort Kent on Friday, Dec. 1. The ladies have known one another since they graduated from high-school in 1992, but time spent building careers and raising children has prevented them from getting together as often as they would like, and the night out at First Mile was just the place for such an outing, they said. 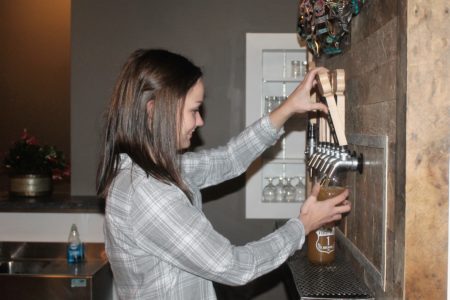 “We got to catch up on old times, new times, future times. Life gets too busy; we don’t catch up enough, so it’s nice to have a place like this with a nice, clean, good atmosphere,” Cairns said. “It’s all about the good company and good beer.”

“It doesn’t have to be an expensive night out,” Hartt added.

“All our recipes are our own creation and original recipes,” Guy said. “We have received nothing but positive feedback from our patrons enjoying our beers…..we have something to offer all beer drinkers tastes.”

Examples include First Snow IPA, which the creators describe as “cloudy and fragrant … tropical and fruity … with little to no bitterness;” Backwoods Autumn Ale, described as having “a smooth nutty-sweet finish;” Little Black Irish Stout, “with a semi-dry finish and light, coffee roast flavors;” and Something Witty, which apparently has “a wit full of citrus flavors with a smooth-mouth feel.”

The brewery currently does not serve food, but patrons may bring in meals of their own choosing to compliment the craft beers at First Mile.

“We are encouraging people to bring food or even order take-out from one of the local spots and enjoy our beers with your meal. We have had several people order take out pizza, subs, or even meals and bring it into the brewery,” Guy said.

The atmosphere at First Mile Brewing Co. is friendly and relaxed. 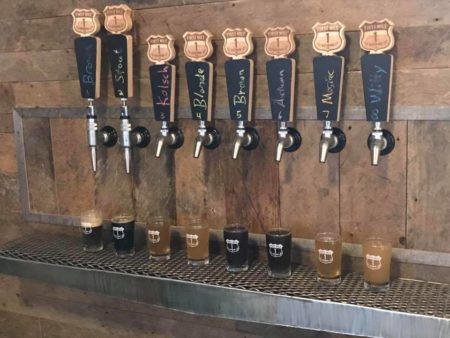 “I find we have a rustic vibe with the reclaimed wood used to build much of what you see in the bar, as well as a more modern feel with the choice of chairs and bar top,” Guy said. “It’s something you would expect to see in a city such as Portland or Bangor.”

The owners have families of their own and have received help from their wives along the way in getting the business off the ground. The women have, among other things, assisted with painting murals on the walls, washing walls and windows, taking turns bartending, and handling financial paperwork.

“And of course the emotional support from them has been enormous, with the many late nights we have spent brewing and building out the space,” Guy said.

First Mile Brewing Co. offers free Wi-Fi “for anyone wanting to sit with their laptop and get some work done or even sit relax and have a beer while studying,” Guy said.

The brewery also is available for private parties and some merchandise, such as hats and shirts with the First Mile Brewing Co. logo, is sold at the business.

For updates on First Mile Brewing Co., including video descriptions of new beers as they become available, check out the business’ Facebook page.

Cloudiness in the region Thursday afternoon along with a slight chance for isolated showers Thursday night and Friday.
Crown Politics END_OF_DOCUMENT_TOKEN_TO_BE_REPLACED